CAMPAIGN: Zero Tolerance of Violence Against Women and Girls On and Off the Pitch - IWD22 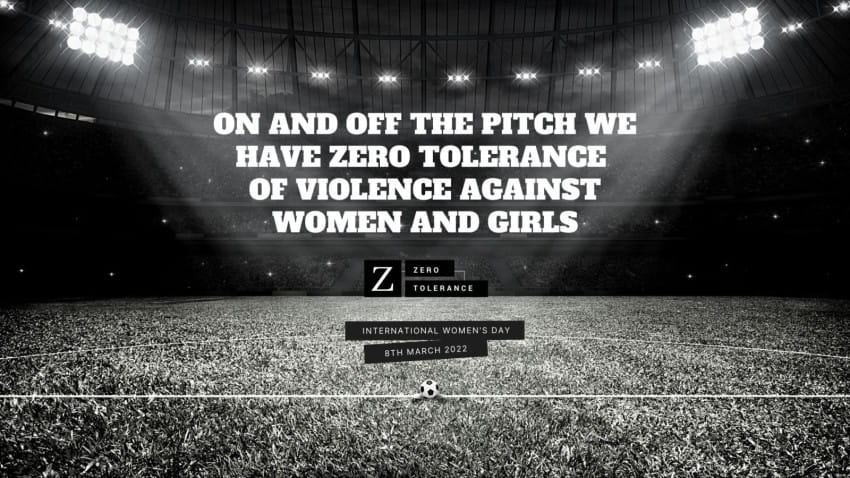 Scottish Professional Football League, Scottish Women’s Football, Glasgow City FC and others join our call for zero tolerance of violence against women and girls on and off the pitch

Recent evidence shows the sexism and gender inequality that exists within Scottish football. A recent survey of female fans conducted by the Scottish Football Supporters Association and Her Game Too, found 1 in 4 female fans had experienced sexist or misogynistic comments whilst attending matches. Nearly half had witnessed others receive similar abuse and over a third had received abuse online. Women footballers also face sexism and abuse. The Press & Journals’ survey of women footballers in the north and north-east of Scotland, published in February 2022, found over 70% of female respondents experienced sexism and over 40% experienced verbal abuse. Woman in Football’s 2022 survey found two-thirds of women have experienced gender discrimination in the footballing workplace.

Zero Tolerance, a Scottish charity working to end VAWG by tackling gender inequality, its root cause, says we are far from a Scotland free from violence against women and girls. This International Women’s Day they are asking the Scottish football community to demonstrate to clubs, players, and fans, that men’s VAWG has no place in football or our wider community by tweeting their Zero Tolerance of violence against women and girls on and off the pitch.

Laura Tomson, co-director of Zero Tolerance said, “Football has a special place in Scottish society and players are role models to fans young and old, so it’s important clubs are clear in the message that violence against women and girls is not acceptable. There’s a lot of work to do, but we’re heartened by the positive engagement we’ve received from the Scottish football community and hope this is the start of meaningful work to making Scottish football a safer space for women and endingVAWG in Scotland.”

Scottish Women Football Champions Glasgow City are fully backing the campaign and proudly wore the Zero Tolerance logo on their strips against Motherwell FC on Sunday 6th of March in their Scottish Women’s Premier League fixture as well as holding up cards before the match to raise awareness of the issue. 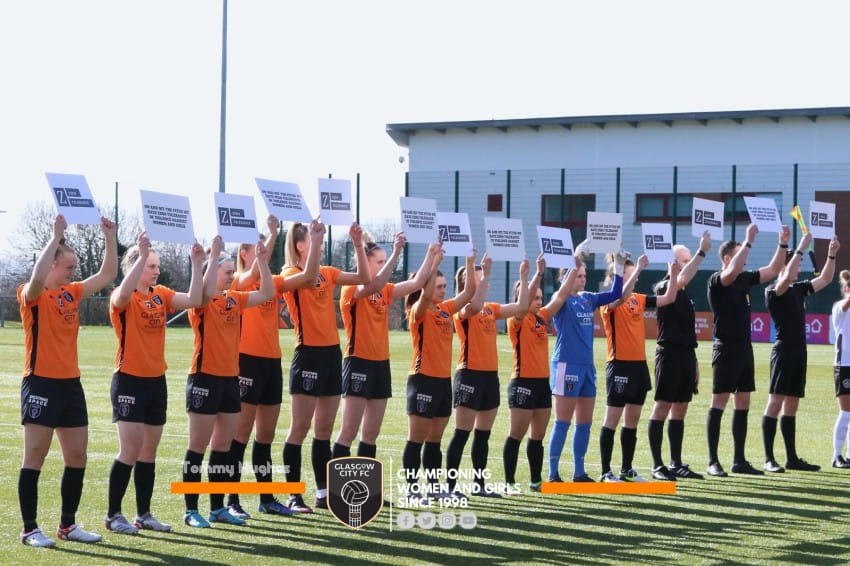 What supporters of the campaign are saying

Neil Doncaster, chief executive of the SPFL, said: “Football has a uniquely powerful voice which cuts across all sections of Scottish society and it’s therefore fitting that we play a part in supporting Zero Tolerance and others in efforts to raise the profile of this crucial issue. It’s particularly appropriate, given our recently announced partnership with the professional women’s game in Scotland and we hope that, by lending our support, we can help to challenge the utterly unacceptable reality of violence against women.”

Aileen Campbell Scottish Women’s Football CEO said: “SWF stands united with Zero Tolerance to drive forward positive change in our sport and across society.  The change we so desperately need will not happen by accident.  It will require commitment, hard work and resolve across the entire football family.  SWF will continue to agitate for structural change, equality in boardrooms and a respect agenda for the women’s game.  Women and girls need to know that football is absolutely a sport for us.  We will not put up with behaviours and attitudes that must be relegated to the past.”

Glasgow City FC Chief Executive, Laura Montgomery said, "International Women’s Day is a global day celebrating the social, economic, cultural and political achievements of women. The campaign also marks a call to action for accelerating gender parity and raising awareness of real issues affecting our gender. One of these is violence against women and girls. Women and girls need to be safe on and off the pitch. They need to be safe at home, in public spaces, online, anywhere. Collectively we must all come together to do everything we can to eradicate this real issue within our society. We are wholeheartedly behind Zero Tolerance and their campaign and believe football and its influence on society can be a power for good and make a real impact in this area."

Fiona McIntyre, Head of Girls’ and Women’s Football at the Scottish FA, said: “We are happy to lend our support to Zero Tolerance and endorse their simple, crucial message. Our job here at the Scottish FA ranges from encouraging and increasing participation at grassroots level to championing elite performers on the international stage. Along the way, we want everyone involved to feel they are free to enjoy the sport they love in a positive, safe environment that is built on equality. We hope the platform football gives us can go some way to ensuring those same standards are adopted beyond the confines of the pitch or stands.”

Thomas Thornton, Board Member of the East Of Scotland Football League, said, ‘’The East Of Scotland Football League proudly supports Zero Tolerance's campaign to tackle violence against women, on International Women’s Day as at all times. That such a campaign's called for shames us as a society - it's very much to be hoped the message impacts as it's meant to.  A cursory glance at last week's Scottish football social media tells us abhorrent attitudes deserving only of condemnation aren't at all as uncommon as most would wish them to be; that said, if our sport can be used as a vehicle for positive anti-violence messages we believe the decent majority are wholly supportive.  We dearly hope the campaign achieves its objectives."

Calum Smith, director of Edinburgh City F.C. said, ‘"As part of International Women's Day, Edinburgh City F.C. calls for the community both on and off the field of play to unite in our condemnation of violence against women and girls whilst standing firmly alongside gender equality. Globally we witness not only in sport at this moment in time that there is no place for violence or inequality"

Neil Sinclair, Head Coach McDermid Ladies said, “Football has an important role to play in supporting zero tolerance of violence against women and girls. A national sport in Scotland, both male and female players are role models to those growing up playing the sport and promoting the zero tolerance message plays a very significant part in ending violence against women and ending gender inequality.”

Players of McDermid Ladies Football Club said “As a team of players, promoting the message of zero tolerance of violence against women and girls is a campaign we are proud to support. We realise the roles we play with inspiring football players of the future, not only at our club but throughout the country, and it’s important that we encourage them all to not accept any form of violence. Through the power of football, we will continue to play our part in raising the profile of zero tolerance and make women’s football and the country a safer environment for all women and girls.”

For further information or to get involved, get in touch with Jo Zawadzka, Campaigns and Engagament Officer on jo.zawadzka@zerotolerance.org.uk 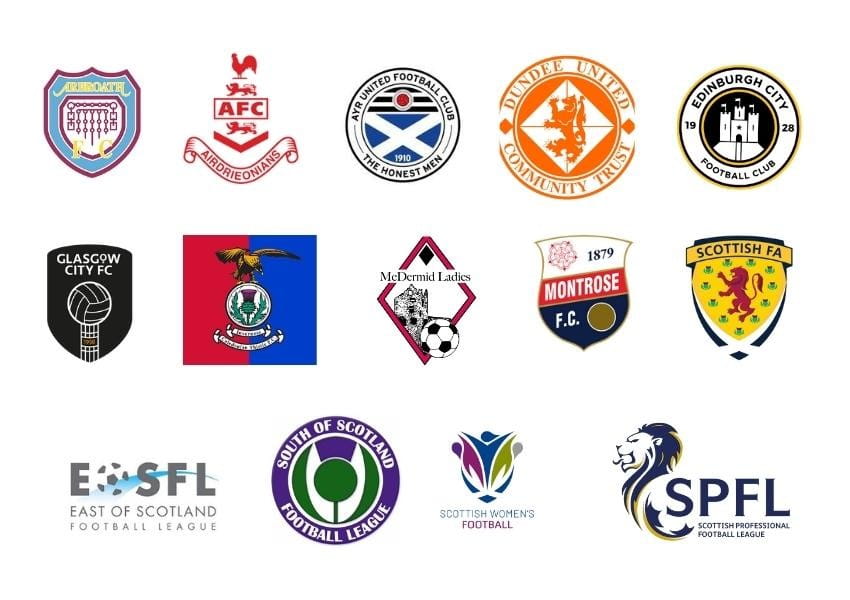