Careful use of language in the media will give a more accurate reflection of the reality of the nature of VAWG, and this can positively affect people's attitudes.

“It is not about dictating how a story should be written but recognising that too often language is still being used to trivialise and sensationalise – when it can have the power to help change attitudes in society.”

Why: Using phrases like sex scandal makes it sound consensual: it both minimises and sensationalises the crime. Use language that accurately conveys the gravity of sexual assault.

Why: Using phrases like this when writing about rape makes it seem less severe than it is.

Instead of: 'Domestic violence'

Why: The term domestic abuse conveys a much wider spectrum of abuse, which can be emotional, economic, psychological and/or physical.

Instead of: 'Abusive relationship'

Why: Placing blame on the relationship or relationship dynamics, rather than on the abuser, suggests that both people are equally at fault.

Instead of: 'A domestic/domestic dispute'

Why: Domestic/domestic dispute frames the incident of violence as a private domestic or family problem and not a crime.

Instead of: 'Child sex charges'

Why: This language fails to recognise that children cannot consent to sex. 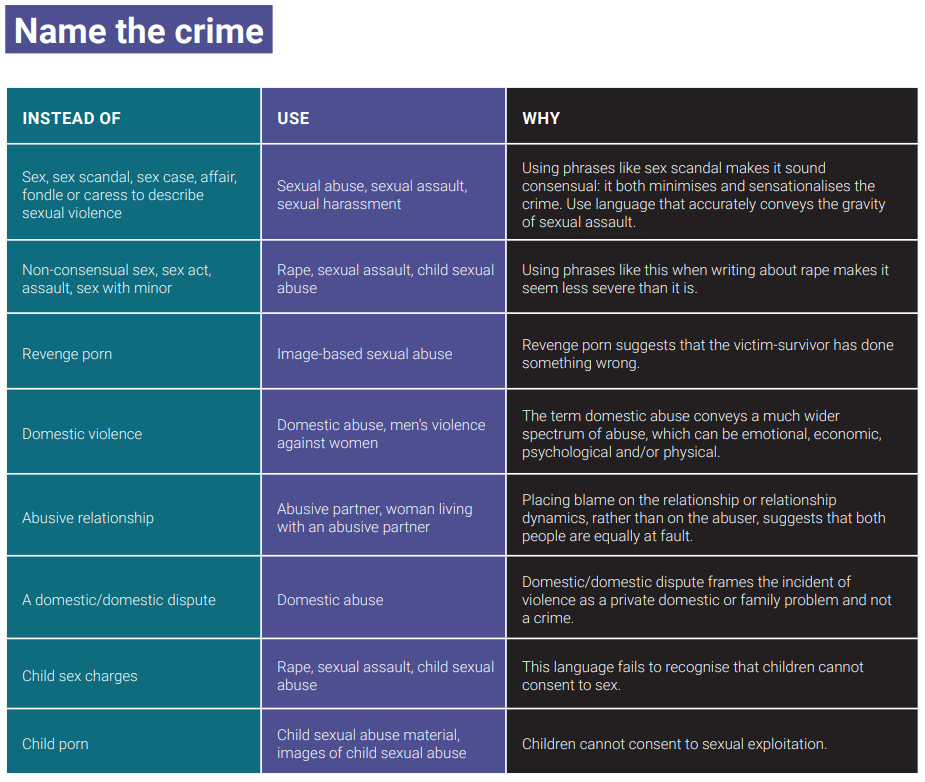 Why: Men who rape, commit sexual violence or domestic abuse are ordinary men, usually someone’s dad, brother, uncle, or friend. Presenting them as ‘monsters’ ignores the wider context of VAWG and perpetuates myths of who the perpetrators are.

Why: These generate sympathy for the perpetrator (sometimes called himpathy) and are often followed by a reason for a perpetrator’s action. There is no justification for violence against women

Why: Unless found guilty, any perpetrator must be referenced as an alleged perpetrator to avoid creating a bias against those testifying for the prosecution.

Why: Terms accused/accuser can portray the accused as the victim and the witness as the aggressor.

Use: 'woman who sells sex,' 'woman involved in pornography/ prostitution'

Use: 'Woman who was murdered'

Why: Regardless of their involvement in commercial sexual exploitation, women who are murdered are women first.

Why: Sexual contact with a child is always abuse. Using these terms rather than ‘children’ presents the issues as one of sexual morality whilst implying that consent was possible.

Instead of: 'In a relationship with', 'had sex with', 'was dating', 'having a fling with', 'Illicit or illegal affair with a girl'

Why: An adult cannot be in a relationship with a child. Any sexual contact with a child is abuse.

Why: All women need the support of an unbiased media that does not contribute to harmful stereotypes. You should mention a person’s gender identity only if it is relevant to the story, e.g. raising awareness of violence against trans women.