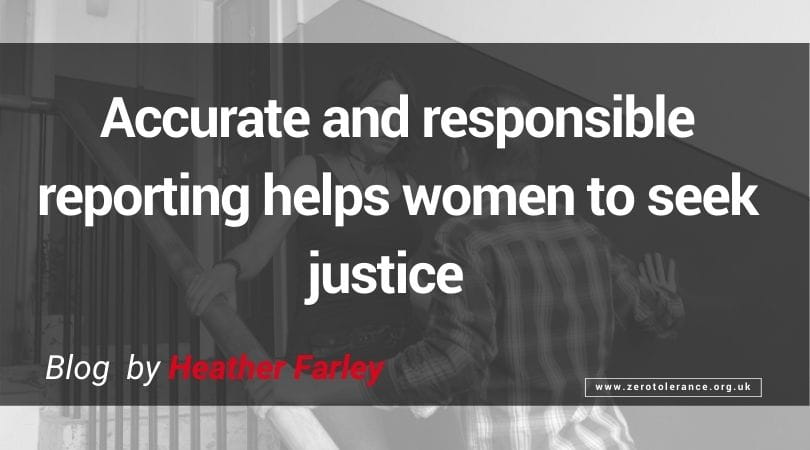 Recently, I overheard my flatmates discussing a documentary about a woman in Australia who went to extreme lengths to falsely accuse her partner of rape. Here was a 60-minute show dedicated to explaining how she did it, how she was caught and the devastating implications for the accused and his family. The story was awful and shocking, but seemed to miss the most obvious point: she was the exception that made the rule. She was among the 2% of false accusations, as opposed to the overwhelming majority of underreported accounts of violence against women and girls (VAWG).

The fact that this story was picked up and dramatized by a mainstream news outlet begs the question, how much damage has the media coverage of this story done to victims/survivors of sexual violence? What responsibility do they have to combat the myths, false accusations and victim-blaming that occur in the media?

Our individual perspectives are shaped by the content we absorb from the world around us; from newspapers, tv shows, films, and social media. The media and popular culture contribute to our understanding of what it means to be a ‘perpetrator’ and ‘victim’ of VAWG. Research has found, rather shockingly, that while the vast majority of rapes are perpetrated by a current or former partner (around 56%), these cases made up only 2% of stories covered in the British press during 2008. Furthermore, in Scotland specifically, of the recorded incidents of domestic abuse in 2018, only 1% of perpetrators were strangers to the victim/survivor. What responsibility, then, do media sources have in reporting, and what harm can this inaccurate representation cause?

Not only does the media contribute to our understanding of how often VAWG happens, but even more so, what it looks like – typically, a monstrous deviant attacking women in public, not long ago in this Daily Record article. The harm this sort of portrayal causes is twofold. Firstly, it misrepresents the realities of everyday VAWG (obscuring the fact that it predominantly occurs in private between intimate partners), and secondly, it works to make survivors question the credibility of their own accountsif they do not fit the media-constructed depiction of VAWG.

We know that media reports sensationalise events for sales, however, in relation to VAWG, this can belittle the experiences of survivors. A study done in Victoria, Australia found almost 40% of articles about VAWG to contain sensationalised content. As a result, women can be dissuaded from reporting violence they’ve experienced because it ‘could have been worse’ or ‘wasn’t his fault’. Even more so, media reports tend to replicate a wrongful narrative that perpetrators are strangers and victims/survivors are a ‘certain type of woman’ who put themselves in danger. Thus, if the assault didn’t happen in a dark alley, then the victim/survivor was probably a willing participant, or at least in some way responsible for their abuse. News stories often use language that avoids placing responsibility on perpetrators, while seeming to imply the victim’s consent. Myths arising out of this victim-blaming culture about natural and appropriate male and female behaviour are constructed and perpetuated through our consumption of press.

The media has the power to influence positive change, too. Studies suggest that coverage of VAWG (particularly high-profile cases) tend to encourage the recall and reinterpretation of one's own experiences. This is most evident in the wave of solidarity shown during the #MeToo movement. The term #MeToo was coined in 2006 by Tarana Burke, yet it wasn’t until the 2017 Harvey Weinstein allegations that it fully entered the mainstream. The proliferation of information and personal accounts of sexual violence that followed across international news outlets, social media, and newspapers brought the world’s attention to something many feminists had been talking about for years; the pervasive and all-encompassing nature of VAWG.

It is worth noting here that despite the overwhelming majority of the original #MeToo accusers in Hollywood being women, the first case brought to prosecution was an allegation by a man against another man. Although it did not lead to a conviction, this example represents how courts, the media and society lessen the credibility of women's testimonies. Women who are seeking justice and have their cases covered by the media are often faced with public scrutiny about their sexual histories. These histories are used to blame women for the abuse they experience and are used to excuse the male perpetrator.

So, if our understanding of society is formed through the media’s portrayals of society, and publishing continues to be a male-dominated space, what does this mean for survivors? The media has a responsibility to survivors of VAWG, yet their tendency to sensationalise accounts of sexual violence, use hyperbole, victim-blame and perpetuate rape myths all contribute to gender inequality and continued violence. These media behaviours have a real impact on reporting figures, and prevent women from seeking justice and holding perpetrators to account. This is all exacerbated by the male-dominated editorial environment which lacks women's perspectives.

We can all contribute to change by using appropriate framing and language, critically assessing what we see in the media and calling out instances of harmful reporting. Just as the causes of violence against women and girls are embedded in the environments we live, so too must the solutions be! The onus is on the media to reframe its current harmful behaviour to report on VAWG with more compassion, transparency and accurate representation.