Skip to menu Skip to content
Home|News/Views|Views|Views|Why publishing the names of victim-survivors of violence against women can be dangerous?

Why publishing the names of victim-survivors of violence against women can be dangerous? 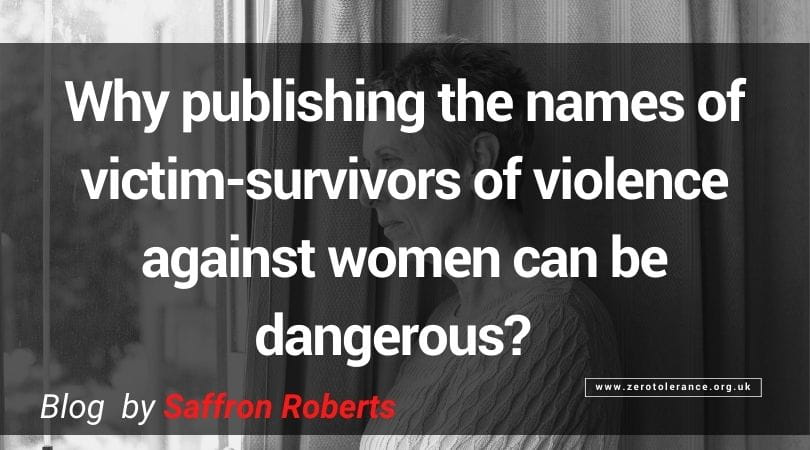 When reporting on domestic abuse cases, there is a lot of contention around the naming of victims and survivors. The debate surrounds legalities of ongoing cases, the freedom of the press, and the impact that publishing names can have on survivors and relatives of victims.

For the survivor, identifying information such as names and locations can both exacerbate trauma and complicate recovery. When the press prints a survivor’s name, they run the risk of re-victimisation. The survivor may not have shared their experiences with their friends, colleagues, and loved ones, yet are now being individually exposed in the media. What's more, the associated stigmas of domestic abuse may cause them further harm when they are labelled a ‘victim’ by a news outlet, as opposed to having the opportunity to tell their own story.

The #MeToo movement is a powerful example of what can happen when women open up about their personal experiences. Emily Ratajkowski’s recent essay about her own experiences of sexual violence and abuse in the modelling industry is an interesting example of how women can use their own names and their own voices in the press. Using the privileged position of fame, Ratajkowski shone light on the violence against women that often goes unspoken within her industry. However, every #MeToo moment was a choice made by an individual woman to share her story in her own way, whereas press coverage using names without express permission removes this process of self-identification.

Naming survivors can also prevent others who have survived abuse from the same perpetrator from reporting, due to not wanting to be similarly exposed in the press. This prevents serial offenders from being brought to justice whilst also preventing survivors from being able to report their abuse, which can often be an extremely valuable part of recovery.

Confidentiality in reporting is not only essential for the survivor’s wellbeing. It is also important for their safety. Where there is no conviction, or short sentences are given, survivors remain at risk of further, and often aggravated, abuse by the same perpetrator. In fact, the majority of domestic homicides occur just after a separation, and stalking and harassment are also more likely after a separation. As such, providing the names of survivors can put them at huge risk from the accused perpetrator.

Identifying information can also put survivors at risk from the communities in which they live. Even without using names, stories that use specific information can risk making the victim-survivor easily identifiable within their communities. In particular, when such stories are shared on social media platforms, they give people the space to comment and freely speculate about a victim-survivor’s identity. For multiply marginalised survivors, any potentially identifying information can put them at risk within communities. For example, if the perpetrator is a man of high standing within a community and the survivor has put this man on trial (whether literally or metaphorically), this can lead to blame of the survivor and put her in further danger of violence and ostracization.

Clause 11 of the Independent Press Standards Organisation Editors’ Code of Practice states that:

‘The press must not identify or publish material likely to lead to the identification of a victim of sexual assault unless there is adequate justification and they are legally free to do so. Journalists are entitled to make enquiries but must take care and exercise discretion to avoid the unjustified disclosure of the identity of a victim of sexual assault.’ (Independent Press Standards Organisation)

Though this instruction is specifically about sexual assault, it can often be used as a loophole to disclose the names of domestic abuse victim-survivors, due to the fine and often overlapping line between domestic abuse and sexual violence. The question is: what counts as ‘adequate justification’ to put a woman in further danger and at risk of further trauma?

Reporting using survivors’ names can often work to sensationalise stories and highlight their reality, particularly when a woman has been killed. However, even when the victim is no longer alive, they are still identifiable within their families and communities. When the press exploits details of a victim’s life and names them publicly, it can have a detrimental and re-traumatising impact on others.

Some of the backlash against keeping names out of the press is based on the argument that not doing so does not protect victims and survivors, but instead enables perpetrators to ‘get away with it’. However, this view puts a great deal of emphasis on the press as prosecution; can a perpetrator truly ‘get away with it’ if they are held accountable in a court of law? What's more, naming individual women in the press often works to hold them personally responsible for what has happened to them. Women should be allowed to process and deal with their trauma out of the public eye.Naming them in the press does not help them do this.

Though there is no specific provision in Scottish law granting automatic anonymity to victims of sexual assault, we recommend maintaining anonymity when it comes to victims of violence against women. Our guidelines for journalists recommend that the names of survivors should only be used where the survivor has given explicit permission.

For example, in the historic case of Nancy Zeigenmeyer in the 1990s, she chose to be named in order to give people “a face and a name to go with the faceless and nameless stories”. When this permission has been given, names should be used in a way that does not put the survivor at potential risk of future harm. Where the woman has been killed, we recommend using the term ‘victim’, and in all other situations, we suggest that the term ‘survivor’ is used.

Only using names when permission has been given allows individual women to have some autonomy in the way their story is told. This is a huge step towards creating more responsible reporting of violence against women.

This blog post was inspired by an anonymous telephone conversation with a relative of a victim-survivor. They contacted Zero Tolerance to ask for help in changing the reporting norms around publishing names of victim-survivors in press articles.