Skip to menu Skip to content
Home|News/Views|Views|Views|Media representation of violence against women: the reality of elderly perpetrators

Media representation of violence against women: the reality of elderly perpetrators

This blog is the third in a series in which Claire Simpson, PhD student at the University of Stirling discusses the results of her media monitoring project. Read her first blog here, her second blog here, and her fourth blog here. Over the next few weeks we will publish blogs from Claire where she takes in an in depth look at some of the results of her study.

This instalment of the media monitoring blog series focuses on the representation of elderly perpetrators of VAW. There were 14 articles, 13 of them in the tabloids, in which the perpetrator was a man at least 60 years old. Their crimes ranged from stalking to murder. It is important to analyse these articles as it will help dispel myths about what types of people inflict VAW.

The majority of stories in which the perpetrator was over 60 years old did not question his fitness to stand trial nor did they include his age in the headline. When the man was over 80 his age was always included in the title. Why is VAW presented as more shocking the older the perpetrator? Many of the columns highlighted the age and apparent frailty of the men, sometimes in wonderment at how such a physically or mentally weak individual could be violent/dangerous, other times to create sympathy for him1-5

These viewpoints were occasionally supported by photographs. The Daily Mirror1 was the only paper to include photographs of the elderly men looking frail. One story, in which an 86 year old man stabbed his wife to death, featured an image of him being put into an ambulance on a stretcher. Almost in juxtaposition, this article is the only one from my week of media monitoring to mention VAW as a social issue making this column an example of good and bad practice.

As the murder took place in a retirement home the coverage in the Express2 implied the man was suffering from a mental illness which includes facilities for such conditions whilst The Sun3 reports the killing as a failed suicide pact between the couple.

Creating sympathy for elderly perpetrators reinforces stereotypes of who can commit VAW as these men are portrayed as unlikely culprits. VAW takes many forms, not just physical or sexual abuse, yet these are frequently the only types of violence mentioned. It includes stalking, grooming, financial and emotional abuse. A man does not need to be physically fit to be able to be violent towards women. Failing to discuss the complexity of violence constituting domestic abuse and VAW is to exclude these abuses and women’s experiences as real or true forms of violence.

Another article in the Mirror4 displays an image of an elderly man at court in a wheelchair. He was accused of killing his wife. The article goes on to describe him as frail and details his smart attire. Later in the story, it mentions/compares him to Britain’s oldest convicted murderer, who was 99 years old, and portrays the murder of his wife as a mercy killing due to her ill health. The emphasis of these articles is on the physicality of the violence despite the perpetrators being older and seemingly less capable. VAW is never justifiable, no matter the age of the criminal or the “reason” for the violence. If you can do the crime, you can do the time. If the man had committed the same crime but was 20 years younger he would likely have been treated much differently by the press. 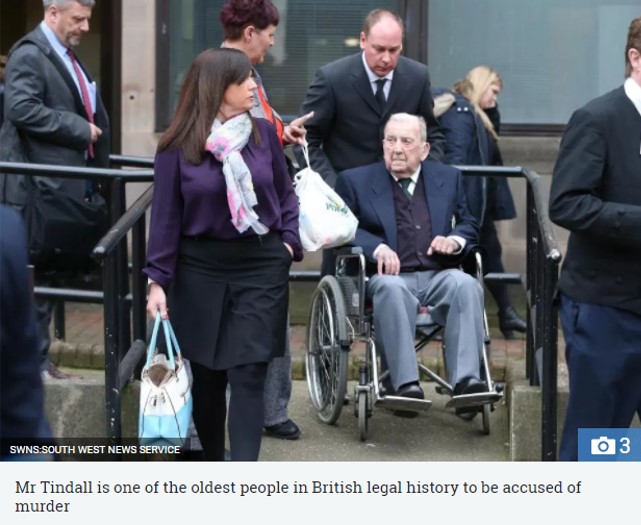 Men in their 60s were described as “beasts”, “depraved” and “deranged”6+7 but no such language was used when the perpetrator was older. These adjectives not only dehumanise the men but suggest “normal”, “sane” men could not inflict VAW therefore reproducing the false notion that only certain types of men are capable of this violence. These men are presented as being mentally unstable but unlike the very elderly perpetrators this is not used to generate sympathy for them, quite the opposite. Mental illness in the comparatively “younger” men is used to present them as a threat/danger. However, mental disorders and medication were also used to explain/justify the violence.

A man in his sixties, previously convicted of sending death threats to a woman, was described as a “nut”5 is thought to have been placed in a “home for troubled adults”5. As part of the defence for the man charged with stalking Jemima Khan was to suggest his medication for skin cancer caused him to commit the crime whilst other articles referred to his bipolar disorder8+9.

Frequently old age is used as a shock factor in VAW is to suggest elderly men are less likely perpetrators of VAW as they are presented as less able than their younger peers when this is not true. Every man is capable of committing VAW therefore it is important the media does not present some men as more or less likely culprits and begins to recognise all men who commit these crimes as a danger.