Being a feminist mum to boys 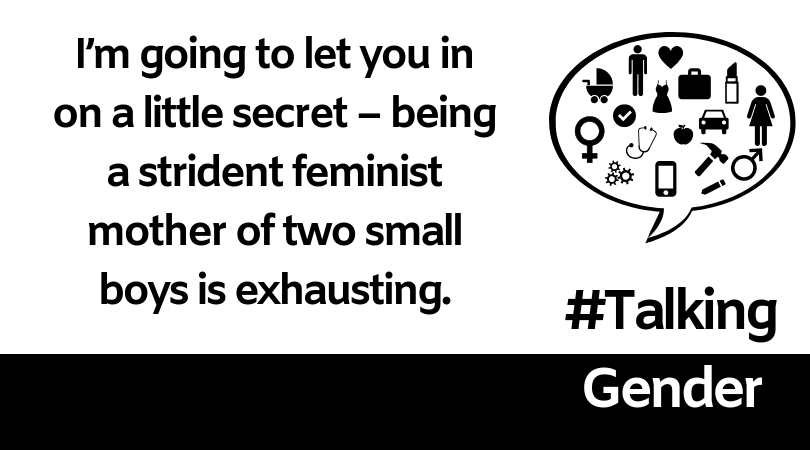 I am a mum of two small boys and I consider myself to be a strident feminist.

I know this because I once went to see Caitlin Moran give a book reading, during which she made us all stand on our chairs and shout “I AM A STRIDENT FEMINIST” at the top of our lungs and we all fell over and it was very funny and empowering. Having said this, I’m going to let you in on a little secret – being a strident feminist mother of two small boys is exhausting.

When my babies were still babies, I found it easy to choose which colours they would wear and which toys they would play with – all non-gender specific of course. I was delighted when my oldest showed an equal interest in Thomas the Tank Engine and Peppa Pig (I might have even been smug about it to be honest), and my youngest asking to have his fingernails painted purple while I was painting my own was the highlight of my year. For a long time my boys would be boys and also be girls if you know what I mean.

What mattered to me the most wasn’t that they grew up understanding that the societal gender stereotypes and assumptions that are pushed on us should be questioned on a daily basis: generally, I just wanted them to be happy and enjoy whatever they felt like, with no pressure regarding the gender-specificity of their chosen toy, book or programme.

Then came the school playground. Almost overnight my boys had abandoned their interest in Peppa and her jolly pink face. Suddenly girls were “stupid”, Princesses and the colour pink was for “babies”. I asked my oldest why he suddenly no longer enjoyed the things he enjoyed before; “The other boys at school tease me for liking ‘The Little Mermaid’ and having long hair” was his reply. Heartbreaking. Similarly my youngest, who had always mixed up the Superhero costumes in his dressing up box with an equal amount of Disney Princess dresses, suddenly announced he no longer wanted them and that I should, “put them in the bin because they’re dumb”. No amount of coaxing or encouragement could change their minds.

Peer pressure seems to be an over-arching theme in the development of children and their attitudes to society as a whole. Bullies on the school playground can do a huge amount of damage to a child’s self esteem, and the lessons being taught at home can do the same. When a parent teaches a child that something is “wrong” or “bad” or “other”, they will carry this attitude with them and project it onto the children around them. So, when other parents tell their children that dresses are “girly” and “stupid”, those children think that too. Sadly, it seems much of society still follows these archaic views of gender.

Generationally we are only just coming into the third and fourth wave of Feminism. My ex mother in law for example, is from the generation where women were best kept quiet, subservient and in the kitchen. Her views have also influenced the boy’s attitudes towards gender.

At my youngest’s 5th birthday party I was getting his cake ready when she came through and exclaimed:

“You can’t put those candles on his cake! They’re pink! Pink is for girls!!”

“It just is!” she seemed flustered at the question, and unable to think of a better response.

I not only put the pink candles on the cake, I put on twice as many and covered the cake in edible gold glitter spray. She was furious, but more than that – she was utterly confused. It’s this confusion that I feel is the centre of the problem – how do you un-teach a lesson that has been repeated and re-enforced over decades, generations and is continually pushed on a daily basis?

For me – it all starts with conversation. Every time one of my children makes a statement about gender, I try to start #TalkingGender to them about it. For every exclamation that “Girls can’t ride motorbikes!” I show them female Motocross riders doing epic stunts on YouTube and ask them if they still think that’s true.

“Hmmmm… maybe she can ride a bike” was my youngest sons conclusion. Baby steps, I guess.

I try to set an example by doing as much DIY and handiwork around the house as I do baking, cooking and cleaning. I read them ‘Goodnight Stories for Rebel Girls’ and ‘Narnia’ at bedtime. I want to show them that traditionally “girly” interests are just as good as Marvel and Minecraft.

As a single mum it’s almost inevitable that I will have to shoulder most of the daily housework tasks alone, however I make sure my boys clean and tidy around the house just as much as I do. The last thing I want is for them to grow up thinking anything is specifically a “boy” or a “girl’s” job. My youngest loves to help me make cupcakes and I will say my oldest is getting pretty adept at wielding a vacuum cleaner!

Alongside conversation is normalization. When I was growing up I learned about gender equality from my feminist Mum, and also from my Dad who was a huge fan of gender re-defining stars like David Bowie. My Dad would regularly hug and kiss his male friends on the cheeks, loved cooking and had long hair, all of which taught me that boys can be just as sensitive and “feminine” as girls.

I try to mix up the music playlists we listen to at home between male and female artists, and have introduced my boys to concepts of gender-fluidity and gender-nonbinary with artists such as Prince and Janelle Monae.

Over the course of writing this article, I am aware that I might be coming off incredibly middle-class-holier-than-thou-sanctimonious, and that really isn’t my intention. Of course, there are middle class parents who absolutely gender their children, and plenty of working class parents who do not. To say otherwise would be classist and presumptuous. Money and a University education do not automatically ensure a liberal attitude towards gender equality, and life lessons are sometimes better learnt outside of the classroom and at home.

Education on these subjects is the reason I wanted to write this piece in the first place. We are all responsible for noticing and challenging restrictive gender ideas in ourselves and in our children and we need to be well informed in order to do that. My feminism was late-blooming, and I still struggle every day with internalized misogyny. The more I read about and talk about gender equality, the more I find myself able to pass that knowledge to my children.

I want them to grow up without the limitations gender puts on them and some days I know, to some extent it is working:

“It’s the same. We all like computer games and running around and making up stories and crisps. It’s great!”

Equality, story-telling and crisps? Sounds like Utopia to me.

WHAT CAN YOU DO?

This blog is part of our Talking Gender series Anyone Can Play. It is all about how to talk to people about Gender Stereotypes and their effect on children.

If you agree that gender stereotypes are harmful to children, then join the movement for change!

1. Start Talking Gender – use our guides to have conversations with family, friends, nurseries, and teachers, about the harms of gender stereotypes on children

2. Download and print out our #AnyoneCanPlay posters and display them at home, at work, or give them to your child’s nursery

HAVE WE MISSED SOMETHING?

Do you have any other strategies and tips for approaching these conversations?

If you have any useful resources or tips about how to talk to friends and family about gender, race, sexuality, and disability please just let us know – we’d love to include it here!

We are also taking pitches for #TalkingGender blogs - we want to know how you approach and experience these conversations.

Please email info@zerotolerance.org.uk with any suggestions for additions or blog ideas.