Skip to menu Skip to content
Home|News/Views|Views|Views|Spotlight on the Scottish Media: Why language matters

Spotlight on the Scottish Media: Why language matters 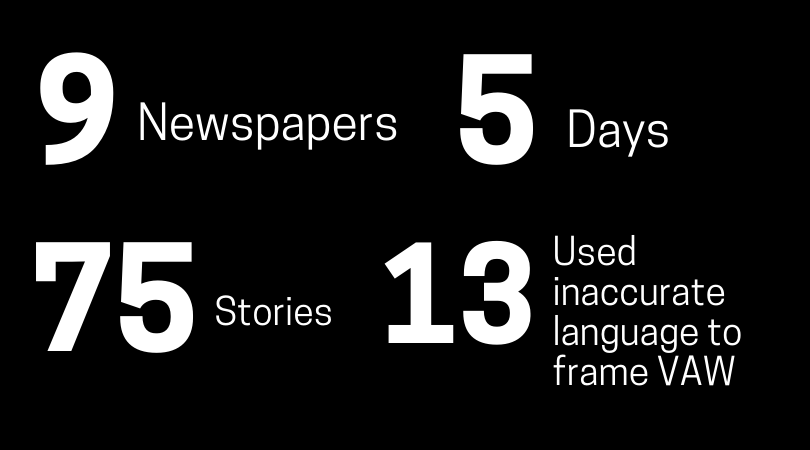 I’ve written four blogs based on my findings. The first blog was an overview of what I have found; the second blog is about non-physical abuse; the third looks at whose voices are heard and who gets to be a perpetrator; and this blog focuses on the language used to report violence against women.

13 stories out of 75 used inaccurate language to frame violence against women. For instance, one report titled the story “Raped by brute she tried to help”. This story was about a woman who was raped by a man in Glasgow. The word ‘brute’ in this example as well as other words such as ‘fiend’, ‘monster’ and ‘evil’, distort the view that perpetrators are ‘normal’ men. As the Zero Tolerance’s Handle with Care guide notes: “men who rape, commit sexual violence or domestic abuse are ordinary men, usually someone’s dad, brother, uncle or friend”. Thus, it is important to frame the perpetrator as someone who is ‘normal’, rather than attaching a name to them. 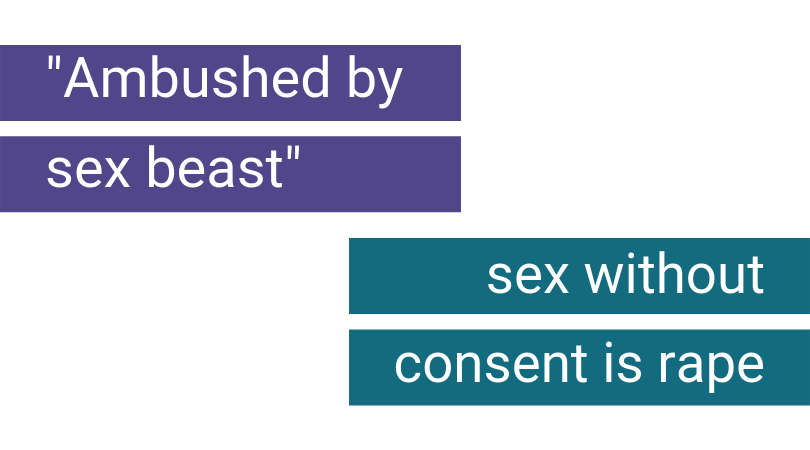 There was another news article with the title “Ambushed by blade wielding sex beast”, which reported that a man raped a woman near Methil. Similarly, to the title above, the phrase “sex beast” is inaccurate. It implies that the perpetrator is not an ordinary man, when in fact sexual violence or domestic abuse is usually carried out by someone who the victim/survivor knows. The word “sex” also insinuates that the assault was consensual, when in fact it the victim/survivor did not consent to this. There is no such thing as non-consensual sex - it is rape.

Many newspaper reports on violence against women glorify or sensationalise the perpetrator and use victim blaming language. The continuous victim blaming in media can feed into how readers view victims/survivors in domestic abuse. Rather than putting the onus on male perpetrators. Victim-blaming is harmful and problematic because the victim’s actions should not be blamed, it should be the perpetrator that should be held accountable. For example, the questions victim/survivors are asked about their sexual assault such as ‘what were you wearing at the time of the assault’? which suggests the victim/survivor was looking for trouble and ‘why were you walking there alone at night?’ this implies that the victim/survivor was putting themselves at risk. These narratives are wrong as reports should instead, ask the perpetrator why they sexually assaulted a woman.

Reflections on the project

Throughout this Media Monitoring project, I found myself having to re-read articles a few times to realise stories were using problematic narratives and language. This indicates that narratives of blaming victims/survivors for their own abuse and framing the perpetrator not as ‘normal’ men, is internalised and normalised in all of us. We have to actively work to be more critical when we read these stories.

The media have the power to construct how its readers view our society. They have the responsibility to accurately report on violence against women by telling the full story rather than just one side of it. It is important to be considerate when selecting what details to include or exclude. Working to report responsibly can ensure that stories do not senationalise the story and skew the reality of the violence as though the woman is to blame for the violence. Instead, the perpetrator’s actions should be held accountable.