On Tuesday 19th July, Lance Hart took a shotgun and killed his partner Claire and his daughter Charlotte in the Lincolnshire town of Spalding. He then turned the gun on himself.

Unfortunately, this shooting is no stand-alone incident and appears in a long line of men’s violence against women. In incidents such as this, good media reporting is vital. Men’s violence against women in any form should never be tolerated, and it should go without saying that a woman should be free to leave her relationship whenever she chooses. We wrote our ‘Handle With Care’ Media Guide for journalists with exactly this aim in mind. Download it here.

The media reaction to this story left a lot to be desired. Here are some recurring problems in both the Spalding coverage, and in similar news stories about violence against women.

Framing the incident as a ‘one-off’ tragedy


The Scottish Government, and gender equality organisations in Scotland, acknowledge that violence against women is a cause and consequence of gender inequality. Acts of violence against women, from harassment to murder, happen on a continuum and we cannot begin to challenge this violence without understanding the context of women’s relative lack of power in our society.

Unfortunately, a tendency among many newspapers is to report incidents such as the tragedy in Spalding not as part of this continuum, but as an isolated, shocking tragedy. Reports use vocabulary such as ‘one off’, ‘unpredictable’, ‘he just snapped’ rather than mentioning national statistics about men’s violence or quoting organisations that work to end men’s violence. In fact, most reports didn’t place the Spalding shooting in the context of men’s violence at all.

Our ‘Handle With Care’ guide contains useful advice for journalists on how to address this.

Removing blame from the perpetrator
Since last Tuesday reports have come out which state that Claire had told Lance she wanted to end their relationship. While this is not totally irrelevant to the story, many news reports have focused too much on this fact, with words and phrases such as ‘jilted father’, ‘heartbreak’ – one newspaper even describing it as a ‘twisted act of love’. It should be obvious that a murder is not an appropriate reaction to a marriage breakdown, but the language used by various news outlets suggests otherwise. 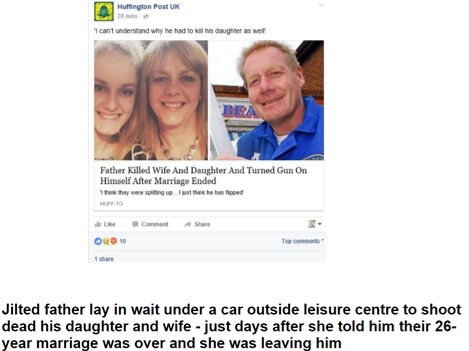 Zero Tolerance dissuades journalists from attributing external factors to men’s violence. Factors often mentioned in articles about violence against women often focus on a troubled relationship, an affair or the effect of alcohol or even a football game. None of these are reasons for an act of violence against women; the over emphasis of the breakdown of the Harts’ marriage suggests this murder was in some way provoked.

‘Handle With Care’ advises journalists how to avoid this type of reporting:


An imbalance of quotes

One of the most jarring aspects of the reports on the Spalding tragedy was the overwhelming number of positive quotes from friends and neighbours about Lance, praising his personality, neighbourliness and even DIY skills. There are no such quotes about Claire and Charlotte. We are not suggesting that events such as these cannot take people by surprise, or that a journalist is responsible for the words of the public. However journalists do have power over which quotes feature in a particular story. Favouring quotes about the decency of the perpetrator over information about the victim is a journalistic choice, and this imbalance constructs a particular narrative.

Scottish Women’s Aid has an excellent blog post from Marjory Kenny, who lends her perspective as a former journalist.

“It appalls me so often as I read reactions to the perpetrator, the abused woman and to the children in the media. My dismay can be about the way the incident is reported, the tone, the stereotyping, the comments quoted, the lack of balance or the reactions from those in authority.
Bad reporting with sensationalist comments and without balance ingrains ignorant thinking about domestic abuse. It reinforces the mentality that it is OK for women to suffer “when a guy flips”. It is somehow all right to attack or kill your wife or partner if you have previously been “a law-abiding good guy”, or in a big job, or a position of importance or …or…or!
As a journalist I thought long and hard how I would handle such reports and I am drawn back time and time again to the journalist’s code which demands that articles must be “fair, balanced and accurate.” Marjorie Kenny 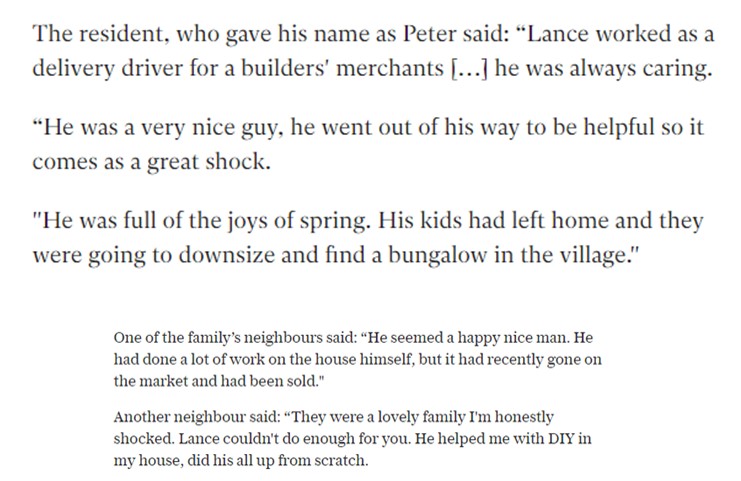 We’ve highlighted these examples, not to criticise particular journalists or even news outlets, but to highlight trends that surface again and again in reporting about violence against women. It is vital that journalists identify these acts not just as isolated incidents but as acts that occur on the continuum of violence against women. By doing so the media can make a positive contribution to ending society’s still too high tolerance of violence and abuse.

If you have seen any stand out reporting on violence against women and you think it deserves to be celebrated, why not submit it to our Write to End Violence Against Women Awards?