Zero Tolerance began as an innovative and striking poster campaign which declared that violence against women was never acceptable. During the six months campaign ran, Edinburgh was adorned with posters, billboards and banners demanding that the public, politicians and legal professionals confront their own prejudices about men’s violence against women and take responsibility for eradicating it.

The Zero Tolerance campaign was originally conceived by Evelyn Gillan, Campaigns Officer for Edinburgh District Council Women’s Unit and her colleague Susan Hart. The poster campaign was followed by a survey conducted by the Council's Women’s Committee, the project was led by Councillor Margaret McGregor and it revealed that safety was a major concern for women in the city.

Franki Raffles was the campaign photographer, known for her social documentary work and her strong feminist ethic. In line with the principles of Zero Tolerance, only strong, positive images of women were used. The campaign posters were unique in that they were rooted in the experience of women and children. This helped to convey the message that much violence against women is unseen, unheard and unspoken.

Posters were displayed on billboards and buses and distributed to shops, restaurants and pubs as well as local council venues such as libraries, community centres and council buildings.

The campaign generated overwhelming interest in and support at local and national level. You can read about the political and media response here. Before long, other councils wanted to duplicate the success of the Edinburgh campaign in their own local areas.

The campaign was designed to run in four phases with separate posters. 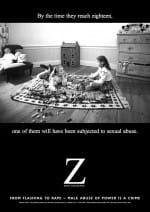 The first poster dealt with the extent of child sexual abuse: ‘By the time they reach 18, one of them will have been subjected to sexual abuse’. The image used deliberately challenged the prevailing view that child sexual abuse is a working-class problem and linked to poverty and unemployment. The definition of child sexual abuse was carefully chosen to make the point that all forms of sexual abuse of children - from flashing to rape - are damaging and part of a continuum of abuse. 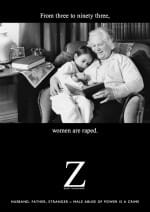 The next poster directly addressed the myth that only young, attractive women are subjected to rape and sexual assault: ‘From three to ninety-three - women are raped’. As with the child sexual abuse poster, the domestic image reinforced the message that most incidents of sexual assault are not perpetrated by strangers in dark alleys. The strapline – ‘Husband, father, stranger - Male abuse of power is a crime’ - highlighted the reality for women and children - that they are more at risk from men they know. 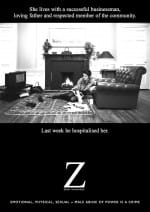 The third poster dealt with domestic abuse and again challenged the widely accepted myth that abuse only occurred in working class households: ‘She lives with a successful businessman, loving father and respected member of the community. Last week he hospitalised her’. Additionally, this poster identified emotional and sexual abuse as forms of domestic abuse. 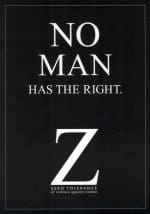 The final poster linked all three previous posters and issues under a unifying slogan – ‘No Man Has the Right’. This gave a powerful message to women and children about the rights they have and, at the same time, to men about those they do not. 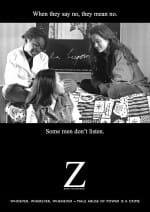 In response to demand for a poster targeting and featuring young people, a fifth poster was produced which addressed the issue of sexual assault – ‘When they say no, they mean no. Some men don't listen’.

Zero Tolerance's original campaign remains one of the most influential and well-known campaigns on violence against women in Scotland. While there have been many positive changes since 1992, there is still a lot of work to do. New expressions of violence are developing or coming to light, including online abuse and ‘honour’ crimes. Some groups of women, such as disabled women, women in the sex industry, lesbian, bisexual and transgender women, and Black, Asian and minority ethnic women, are more likely to be affected by men’s violence yet face extra barriers to accessing justice. Until we end all forms of violence against all women, Zero Tolerance will continue to campaign for change.

The power of Zero: how a bold Scotland-based campaign changed the world’s thinking about sexual violence.

Find out more about Franki Raffles on her website.

“We need this to do things differently”: A framework for a new, inclusive and intersectional organisation to transform attitudes towards women and girls and promote gender equality in Scotland.