Skip to menu Skip to content
Home|News/Views|Views|Views|Spotlight on Scottish Media: what's the story?

This March, Zero Tolerance Project Support Intern Jenny Lester is blogging about the results of her media monitoring study. She’s been scanning Scottish newspapers for stories about violence against women to get an idea about the state of media reporting in Scotland. 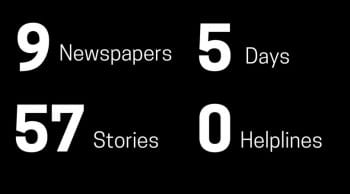 In 57 articles discussing rape, domestic abuse, violence, and murder there were 0 mentions of helplines that could be contacted if the issues affected the reader. This was one of the more disappointing findings from the media monitoring project I have undertaken for Zero Tolerance.

Domestic abuse and violence against women affects all women – 1 in 3 women worldwide experience physical and/or sexual intimate partner violence or non-partner sexual violence in their lifetime.¹ The abuse and violence that women experience is varied, it can come in different combinations, it can happen over a long period of time and it often escalates – intimate partner murder is often the end of a cycle of domestic abuse. Read more about this here.

Reporting only the “goriest” of stories, or mainly reporting on stories where the woman is white and middle class, and/or the assailant is poor and black ⁴ informs and shapes myths surrounding rape. For example that it is perpetrated by strangers – when around 90% of women know the man who raped them before the incident.⁵

There were 57 stories in total – 50% of these stories were about rape and sexual assault, 38% were about violence and murder, and only 13% covered other forms of abuse. 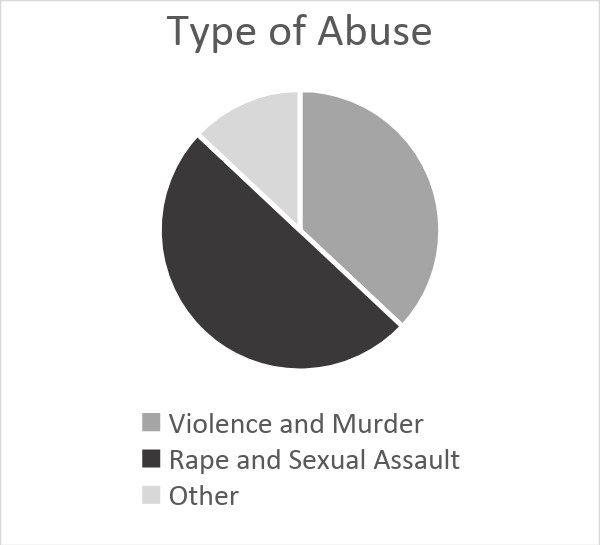 Without stories about non-physical abuse, e.g psychological or financial, , the women who suffer it may feel they are alone in what they endure, or may feel like their situation is normal, or that there is no help available. Especially when no helpline is listed next to the story!

Reporting only on violence and sexual assault does not represent the range of violence against women and domestic abuse that exists. There is an active choice to focus on sensational stories with white victim-survivors which does not portray violence against women (VAW) as what it is; an everyday occurrence that can affect #AnyWomanAnwhere, facilitated by a societal norms, that can be stopped.


It happens all the time

It was disappointing to note that almost all of the stories did not reference the magnitude of this epidemic. Feminist activists have long been trying to lift the silence on rape – and dispel the myth that it is rare and exceptional. Only one story out of 57 situated the story in the context of the scale of violence against women. This was in the Sun’s large spread on the new Domestic Abuse Bill⁶ – this newest legislation passed by the Scottish government rightfully criminalises psychological abuse such as coercive and controlling behaviour. The story was a transcript of the speech given by Justice Secretary Michael Matheson, and as such provided statistical context including reference to the #every9minutes campaign, and the gendered nature of domestic abuse; 79% of cases being with a women victim-survivor, and a male accused.

Every other story ran without this context. Leaving each of those stories to appear to be one-offs; horrible, but singularities. Things that happen to other people. Not only is this not true, but it also fails to recognise the preventable societal cause for the epidemic of violence against women.

I was pleasantly surprised by the imagery alongside the stories. Most pictures that accompanied stories were good, they showed pictures of the women as individuals, or the couple together. Ironically, the one story that used a picture of a black eye was the Sun story about Domestic Abuse bill, with their online story alongside a women flinching away from a man about to hit her. This seemed a strange choice as the story was literally covering a bill that says domestic abuse is not always physical.

Displaying pictures of bruises and physical injury, such as black eyes, does not cover the scope of harm done to women. It perpetuates the myth that domestic abuse is only when a man physically abuses a woman.

Journalists and editors told us that it was hard to find good stock images to use that didn't show physical violence. That is why Zero Tolerance in partnership with Scottish Women's Aid created an image bank of free to use stock images that can be used alongside stories about violence against women. Find these here.

Focusing only on “gory” stories of stranger rape and violence, using stereotypical images, and not providing context shape societal perceptions of what we recognise as abuse and how we view the scale of the problem and creates a culture. A culture that does not recognise what happens to some women as abuse unless they are physically assaulted. It can make those women blame themselves, feel ashamed, and scared to come forward.