It’s 1992. Zero Tolerance’s initial campaign is launched by Edinburgh District Council’s women’s committee in Edinburgh. The campaign, inspired by a Canadian family violence public awareness
initiative, was launched to an unsuspecting public, dominating the urban environment of the capital with four powerful posters addressing men’s violence against women and children.

Feminist photographer and designer Franki Raffles was commissioned to produce the pictures of the posters, driven by her commitment to the development of a radical campaign that would embody the feminist redefinition of violence against women.

The advent of the second wave of feminism in the 1970s overturned the silence surrounding domestic abuse and men’s sexual violence against women, by shifting the discussion on such violence from and individual experience narrative to a cultural and systemic narrative, demonstrating the true scale of the issue. The 1970s became a milestone for the feminist redefinition of men’s violence against women, as feminist interventions on the matter redefined it through a socio-political perspective, making such violence visible for the first time.

Zero Tolerance’s original campaign is essentially the embodiment of this very fight for visibility; as Susan Hart (1997) writes, the production of the posters was the result of intensive planning, consultation and creative design by a team of committed women, driven by Franki Raffle’s passion, talent, and commitment. The posters, imposingly displayed on billboards, bus stops and a series of other public places, along with massive black and white placards placed throughout Edinburgh’s Princes Street, were raw, stark and poignant, turning what before had been merely whispered into a powerful public statement.

The first poster addressed the prevalence of child sexual abuse, deliberately depicting children playing in an apparently upper-class household, and thus challenging a popular misconception of the time that children living in working-class households were at a higher risk of being sexually abused. Moreover, the definition of child sexual abuse at the bottom of the poster, encompassing sexually violent behaviours from flashing to rape, was a political statement that captures the continuum of abuse, what feminist author Liz Kelly (1988) theorised as the range of men’s sexually aggressive and abusive behaviours that should not be examined separately, but as rather shading into one another. 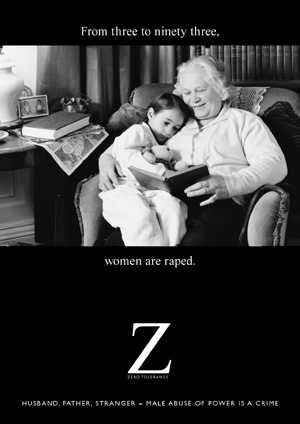 The second poster addressed rape, bearing the powerful message that women face the threat of rape throughout their entire life. Moreover, the deliberate depiction of women in a domestic environment, along with the poster’s caption that defined rapists not only as strangers but also as husbands and fathers, challenged the popular misconception that strangers in dark alleys were the only perpetrators of the crime. Reflecting feminist author Susan Brownmiller’s (1974) statement that “the typical American rapist might be the boy next door” (p. 174), the poster essentially captures feminism’s main struggle to challenge the popular narrative of the rapist as a depraved stranger and shed light on the fact that most rapes are committed by men that are known to the survivors. 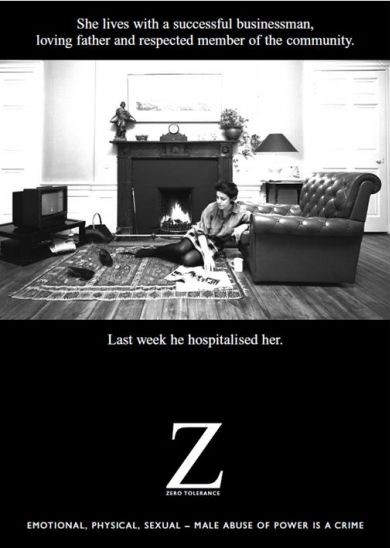 The third poster addressed domestic violence, by displaying an upper-class household and naming a successful businessman as the perpetrator of the abuse. The poster also communicated a nuanced understanding of domestic abuse, as it explicitly identified it as encompassing emotional, sexual and physical abuse. 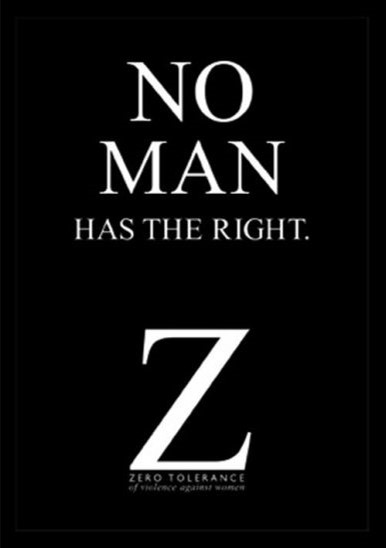 Zero Tolerance’s initial campaign was unequivocally a feminist campaign; the posters constituted a public validation of women’s experiences, explicitly speaking of men’s abuse as men’s responsibility, while giving women the power to name, and the power to reject this abuse, turning silence and voicelessness into a (public) site of resistance.

Maria Sofou has been researching our archives and finding out more about our 1992 campaign. She will be writing a series of blogs about our poster campaign over the coming weeks. Maria lives and works in Edinburgh. She originally studied History and Theory of Art in Athens, Greece, and in 2017 received her Master’s in Applied Criminology and Forensic Psychology from Edinburgh Napier University. Her dissertation focused on campus sexual assault and institutional betrayal in the United States. She is currently a postgraduate student in Gender Studies at Stirling University.