This March, our intern Jenny is blogging about the results of her media monitoring study. She’s been scanning Scottish newspapers for stories about violence against women to get an idea about the state of media reporting in Scotland. Read her first blog here, third blog here, and fourth here. 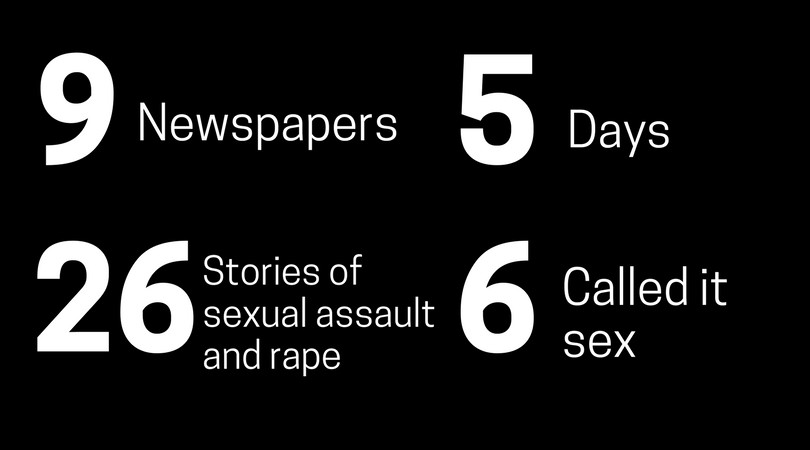 In 26 articles discussing rape and sexual assault, 6 headlines used the word “sex” instead of rape or assault. This was one of the more disappointing findings from the media monitoring project I have undertaken for Zero Tolerance.

I’ve split the findings into four blogs, this first one you can find here, discusses what the stories were about. This blog is a more in-depth analysis of the language used in the stories. The third covers whose side the stories were on. And the fourth is about the breakdown of the gender of the author of the stories.

The language that is used in these stories is so important as it shapes attitudes towards violence against women (VAW). The word choice and framing of the story informs how the reader perceives the incident, and the context of the incident.

Out of the 26 stories that were about rape and sexual assault, six separate headlines defined the story as one about “sex”¹. This is simply factually inaccurate. If a woman had come forward with a “sex claim” about a man it wouldn’t be news, it wouldn’t be a crime, there wouldn’t be a story. Sex without consent is not sex, it is rape. This word choice is not only factually inaccurate, but damaging – it blurs the very clear line between consent and rape.

Four separate stories chose to describe the assailant in sensationalised language, such as “beast”, “fiend”, “monster”, “evil”, and “brute”. All four of these stories were in tabloid newspapers; two appearing in the Mirror, and two in the Sun². Dehumanising these men who perpetrate violence against women allows the reader to set them apart from ‘normal’ men. This does not challenge the reader to question why some men think it is acceptable to behave in this way. As Zero Tolerance’s Handle With Care Guidelines put it: “A man who is a ‘sex-beast’ does not warrant further investigation for his evil is inherent and unexplainable; an ordinary man who commits a horrific crime is much more perplexing”. To tackle the cause of violence against women we need to do more than label some men as monsters and ignore the toxic culture that permits this behaviour.

I was happily surprised that no stories used adjectives to describe the victim-survivors that made them appear weak e.g. innocent, pure etc. However, there was still some trouble word choice. One story about the murder of Cheryl Hooper, used quotes from the local community to describe her, and the journalist chose to include the slightly disturbing comment of, “an attractive girl”³. Cheryl Hooper was a 51 year old woman who had just been murdered – not an “attractive girl”. Although the journalist is not saying this about Cheryl Hooper, they still chose to print that specific quote – when they very easily could have left out that irreverent and sexist comment altogether. Printing comments like that tell the reader that she deserves our pity; not our rage, and that we should be focusing on her looks, not his crime.

Calling out this problematic language is not curtailing of free speech or censorship. This is about asking journalists to recognise their duty in shaping of societal perceptions, and to use factual unbiased language. The language that is used when reporting these stories can be part of creating a climate where we challenge the cause of violence against women. It is the duty of the media to be part of that change.

It is very easy to be part of this change and not part of the problem a journalist or editor. As such, I’ll be ending each blog with a simple set of recommendations, because writing about violence against women in a way that is not harmful is really very basic.

For full recommendations on how to write about Violence Against Women see our guidelines. Guidelines on language use can be found on page 19.