Skip to menu Skip to content
Home|News/Views|Views|Views|Media Monitoring: celebrities can be perpetrators too

Media Monitoring: celebrities can be perpetrators too 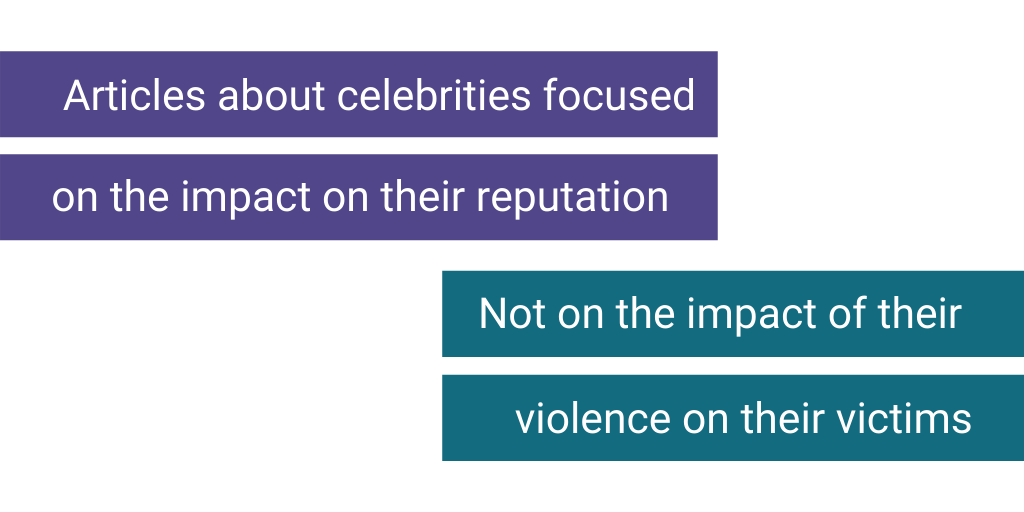 Our Project Support Intern, Saffron Roberts, is blogging about her media monitoring project during the COVID-19 Lockdown. She has monitored 10 Scottish news sites for the first 7 days of Lockdown (24 – 30 March) and analysed their coverage of violence against women.

In the first week of lockdown, 12 of the 37 stories about violence against women we found were about celebrities. Two stories referred to Camilla’s callouts to domestic abuse victims during coronavirus, one was about Denise Van Outen’s brother (though largely used her as the focal point), and others were about specific alleged cases involving celebrities, such as Alex Salmond and Floyd Mayweather.

In the wider context of the #MeToo movement, the way we report cases involving celebrities is extremely important. The reporting should be mindful of the power that celebrities hold in comparison to their victims. It should show that anyone who is abusive, no matter the amount of power they wield, will face consequences for their actions.

During the week I was monitoring (24-30 March), Harvey Weinstein had just been sentenced, and Alex Salmond’s court case was drawing to a close. I was optimistic that Weinstein’s sentencing would impact the way people were writing about VAW by famous perpetrators, but unfortunately, I was wrong. In these articles the reporting always centred around the celebrity, the impact on their reputation, and not on the impact on their victims.

For more information about reporting on sexual assault trials see this guide from the Gender Equal Media Project.

There were two articles about ‘super middleweight champion’ Billy Joe Saunders’s apology video. However, there were no articles talking about what he was apologising for! He had filmed and circulated a video of himself showing men how to hit their girlfriends during quarantine if they were “annoying them”. Both articles covered his apology, but neither identified this apology as lacking or half-hearted (which it was). But both articles managed to mention his sporting success multiple times. Neither mentioned the implications of someone in the public eye openly, mockingly, encouraging domestic abuse during a time period where domestic abuse helplines are already experiencing surges. Neither articles provided any helplines. 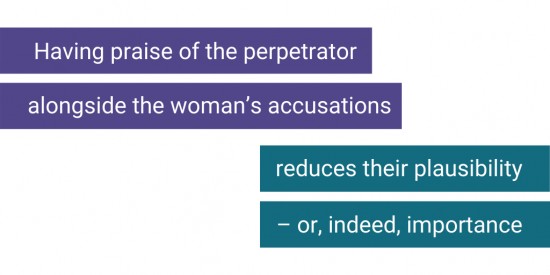 Similarly, in an article about ‘Floyd Mayweather’s late ex-girlfriend’, whose memoirs talk about his violent abuse of her, the Daily Mail writer chooses to focus on the ‘famed boxer’, ‘former world champion’, and ‘legendary boxer’. It is almost impressive that they managed to fit in three aggrandising terms in a very short article about his supposedly abusing his ex-girlfriend. By focussing on the famous athlete, as opposed to his victim, the article ends up combining praise of the perpetrator alongside the woman’s accusations, thus inevitably reducing their seeming plausibility – or, indeed, importance.

An extremely disappointing read was a Daily Mail article entitled ‘Denise Van Outen's brother 'avoids jail after beating up his wife and smashing her head against a wall'’. This article, throughout, focussed on the perpetrator’s connection to celebrity, calling him ‘the brother of the Loose Women star’ despite its acknowledgement that Van Outen hadn’t been known to have contact with him since the incident. As such, due to her fame, a woman is brought into connection with a perpetrator, thus effectively weighting her name alongside his.

Focus on the impact on victims not abusers

When writing about celebrity perpetrators or alleged perpetrators articles should focus on the violence they have committed. Their accolades should not be listed in eulogy to them, but instead, should be used to talk about the power that they held and used to commit abuse and avoid consequences for so long. There is very real evidence, sitting in the White House, that allegations of violence do not have the huge negative impact on men’s careers or lives that media pieces often harp on about. Instead of worrying about the reputation of powerful men who will probably remain powerful, pieces should consider the victim and the impact the abuse and the coverage will have on them.

Free and confidential service for anyone of any gender who has experienced domestic abuse or forced marriage.

helpline@ndafmhs.org.uk (response within 2 days by email)

Full details of access to support for people who are deaf or hard of hearing can be found at https://www.rapecrisisscotland.org.uk/help-deaf-access-to-support/

We can arrange for language interpreters.

Free and confidential support and information for anyone, women and men, affected by sexual violence, no matter when or how it happened.

Free and confidential help for anyone who is worried a child is at risk of, or has had, FGM.

Free and confidential service to help anyone under 19 in the UK with any issue they’re going through.

Free and confidential service for anyone who is concerned about their own behaviour towards their partner (male, female, in heterosexual or same-sex relationships).

Help for black and minority ethnic (BME) women, children and young people who are experiencing, or who have experienced, domestic abuse.

Help for self-identifying women aged 16 and over affected by violence and abuse by providing free legal information and advice through helpline, legal surgeries and ongoing casework.

This is a confidential service if you're impacted by stalking. They'll provide impartial advice and information to men and women, including:

Gives free and confidential support to men and women, and practical help for victims and witnesses of crime.