Skip to menu Skip to content
Home|News/Views|Views|Views|Spotlight on the Scottish Media: Whose voices are heard?

Spotlight on the Scottish Media: Whose voices are heard? 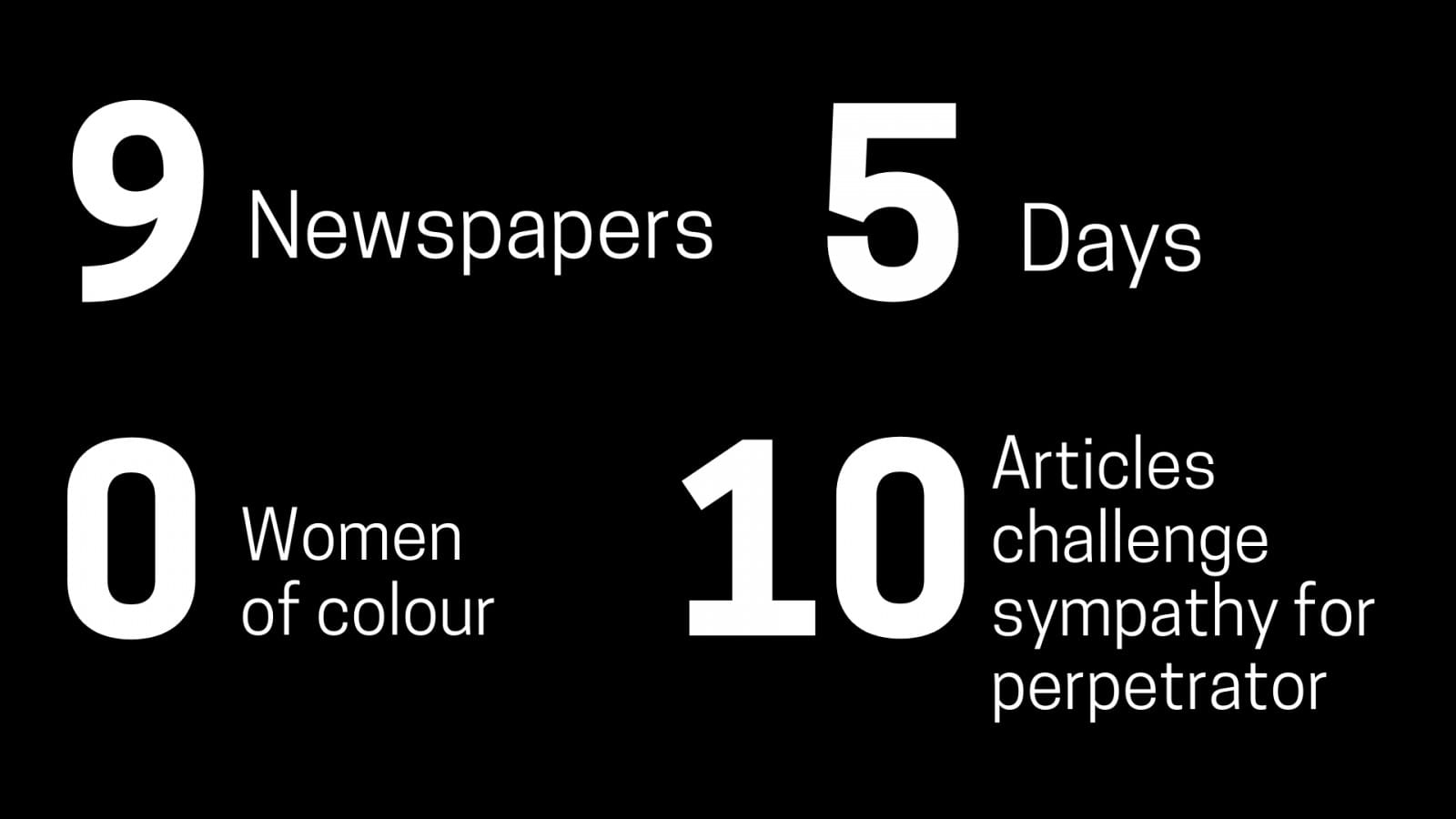 I’ve written four blogs based on my findings. The first blog gives an overview of what I’ve found; the second blog is about non-physical abuse; this blog looks at whose voices are heard and who gets to be a perpetrator?; and the fourth focuses on the language used to report violence against women.

Whose stories are told? Whose voices are heard? And whose are not? Of the 75 reports, none had specified that the victim was a women of colour. While this may be a coincidence in that there were simply no reports to be made on violence against women of colour that week, this can distort the true reality of violence against women - which can affect Any Woman, Anywhere.

It is important to recognise how different identities intersect such as race AND gender, rather than race OR gender can impact women differently. The combined identities of race and gender interact to create double-discrimination. That is, while one woman may experience sexist abuse, women of colour can experience abuse on a sexist AND racist level. Thus, it is imperative to recognise the ethnicity of women’s experiences of violence. You can read more about Kimberle Crenshaw’s work on intersectionality here. There is also an introductory video on intersectionality delivered by Crenshaw.

Including stories of women with diverse backgrounds and identities may help the victims to recognise the signs of violence and abuse they’ve experienced and encourage them to report it and seek help. In particular, female genital mutilation (FGM) and traditional harmful practices disproportionally affect women of colour. It occurs to between 120 million and 140 million women across 29 countries across the globe.[i] 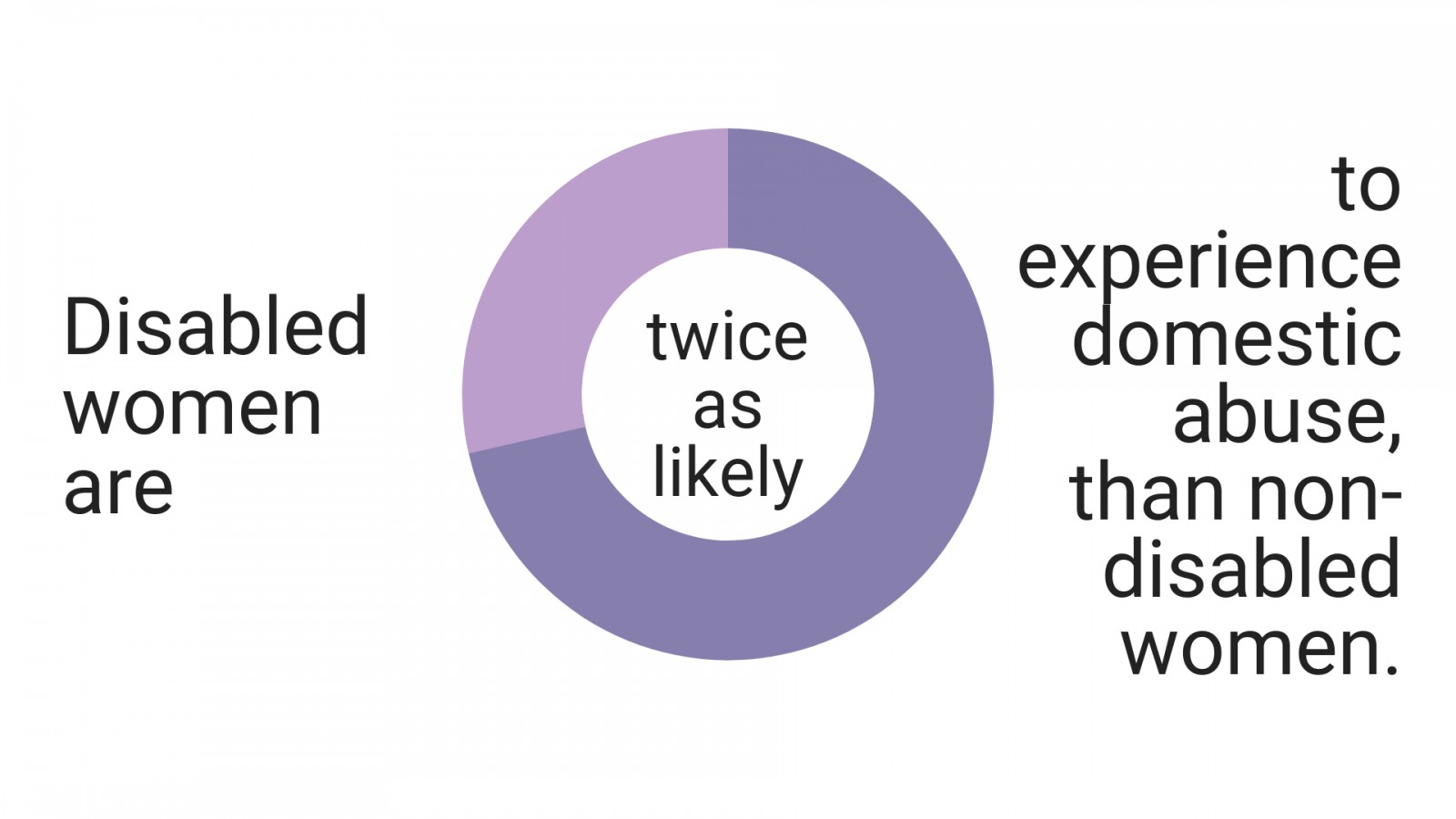 Who can be a perpetrator? And what do they look like?

There is not a one size fits all description. During this week of media monitoring, ten out of the 75 stories were covering the Christopher Daniel story. Christopher Daniel was found guilty of sexually abused a six-year-old girl but was granted an absolute discharge; he will not serve time, he will not be on the sex offenders register and he will not have any criminal record. 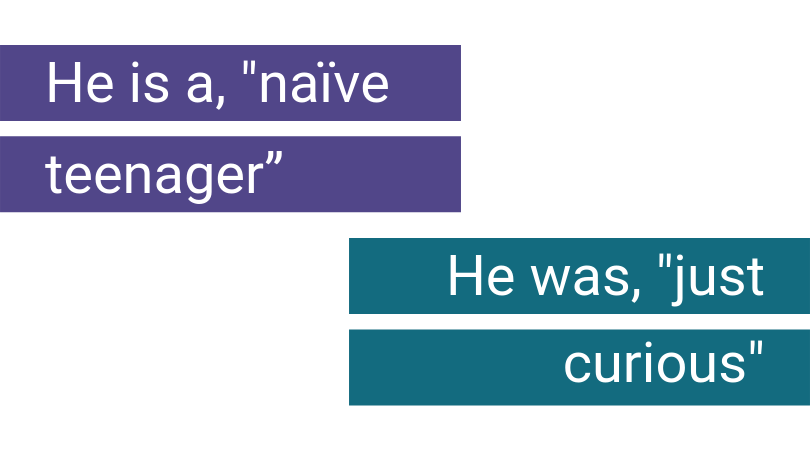 The main reason for this outcome was because the sheriff saw the perpetrator as a “naïve teenager” who sexually abused a girl because he was “just curious”.

This justification of the perpetrator’s actions is wrong - there is never an excuse for violence against women. It appears that the sheriff was lenient with perpetrator because he is ‘middle class’ and is going to university to study Dentistry. This unfortunately reinforces the idea that class determines who gets to be a perpetrator or not. These are important points to remember when thinking about who gets to be a perpetrator and who does not. It makes me wonder if he would have faced different consequences if he did not have a middle class background and/or if he was not going to university to study Dentistry.

All of the stories reporting on this case challenged the sheriff’s decision to not punish the assailant. For example, one journalist, Richard Elias (Daily Express 29/1/19) identified that “the ruling means that future employers may not know about his crime”. This acknowledgement is good as it recognises the consequences of the decision ruled by the court – that Daniels will not be punished for sexually abusing a child and that it will not affect his future career.

One report also consulted with a woman’s organisation. This was after the report that granted Daniels absolute discharge was to be kept confidential. The Chief Executive of Rape Crisis Scotland, Sandy Brindley commented on the case. She “questioned the decision to grant an absolute discharge…in such circumstances there are significant issues of public protection and safety, not least because the perpetrator will not be placed on the sex offenders register"[iv]. This reporter also included comments made by a professor at the University of Glasgow. The quote suggests that the sheriff probably had his reasons for not punishing Daniels, however he also wrote that "it damages public confidence in the justice system if the reasons for a sentence like this are not made public”. A Crown Office spokesman also commented and said the decision not to appeal was made after ”full and careful decision”. This article is a good example of well-balanced reporting as the journalist is critical of the story and seems to be calling out the sheriff for his actions. It calls attention to the injustice that the victim/survivor has received as a response to the court‘s decision.