A vital part of Zero Tolerance’s original campaign’s success was the overwhelmingly positive political and media response it received at the time of its launch, allowing for widespread diffusion of its radical message.

The campaign took place within a context that differed significantly from the overall British picture. Fiona Mackay (2001) notes, that the majority Conservative Government in the House of Commons was widely unpopular in Scotland with just 11 Conservatives MPs being elected, by 1992. In contrast, 49 out of 72 Scottish MPs in 1992 belonged to the Labour Party. The Labour Party also held majorities in 41 councils across Scotland, including a progressive Labour Left administration in Edinburgh. It was in this administration, with women councilors and officers and an active women’s committee, that the Zero Tolerance campaign was conceived and launched with wide political support. Although there was criticism from politicians from all parties, most notably the SNP Lord Provost of Edinburgh’s public complaint against the ‘extreme’ campaign to the Sunday Times Scotland, declaring his powerlessness to act as “any word of criticism is seen as male chauvinism”. (Mackay, 2001), the overall political response to the campaign was positive, with support coming from all parties. Interestingly, one of the key supporters of the campaign in Edinburgh was a Conservative woman councilor.

Crucially, media response was similarly positive; since the launch of the campaign, press interest, including print, radio and TV, was extensive and generally favourable. A 1993 report by the Women’s Unit, part of the Council’s Women’s Committee, even posited that media interest around the campaign was disproportionate, considering the actual size and scale of the campaign. During the Zero Tolerance campaign’s inaugural week, the Edinburgh Evening News, ran news coverage and feature articles on a daily basis, making a significant contribution to the campaign’s cause.

Additionally, in tandem with this, the paper ran its own campaign against men’s violence against women, entitled ‘Free Us From Fear’. This sparked readers’ interest and suggestions, directed to decision-makers and city officials, on how Edinburgh could be a safer place for women.

Overall, media clippings stored in the Zero Tolerance archive collection at Glasgow Women’s Library reveal that the press extensively increased the reach of the campaign’s radical message While the campaign’s success lies in its counter-hegemonic message at a time when men’s violence against women was swept under the rug, the extensive press coverage of the time made a significant contribution to the reinforcement of the campaign and its cause. 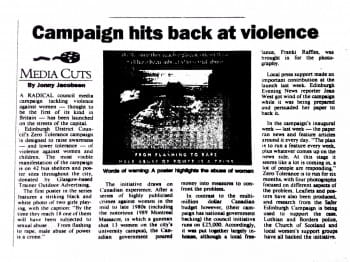 Maria Sofou has been researching our archives and finding out more about our 1992 campaign. She will be writing a series of blogs about our poster campaign over the coming weeks. Maria lives and works in Edinburgh. She originally studied History and Theory of Art in Athens, Greece, and in 2017 received her Master’s in Applied Criminology and Forensic Psychology from Edinburgh Napier University. Her dissertation focused on campus sexual assault and institutional betrayal in the United States. She is currently a postgraduate student in Gender Studies at Stirling University.