Winners announced for the Write to End Violence Against Women Awards 2019! 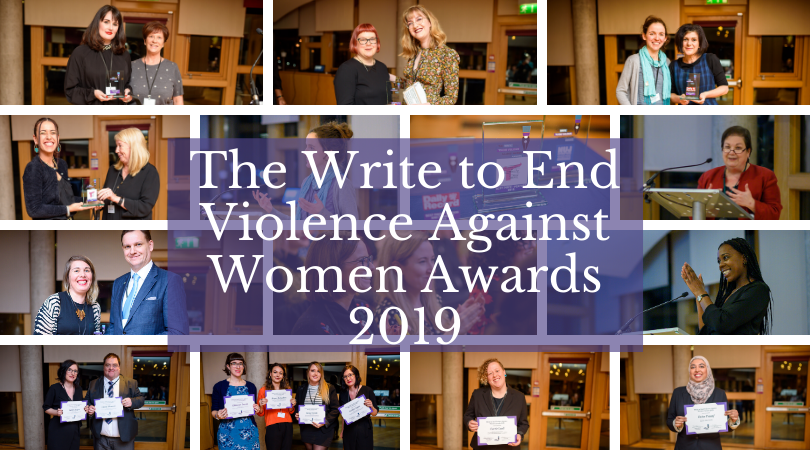 On Wednesday night, we announced the winner of the 2019 Write to End Violence Against Women Awards, at a ceremony at the Scottish parliament sponsored by Jackie Baillie, MSP.

It is encouraging to see that so many journalists, editors, creative writers and bloggers are committed to rewriting the story we too often hear about violence against women - one which forefronts and excuses the perpetrator - to one which shines a light on gender inequality and ensures the stories of victims and survivors are heard, challenging the narrative that says violence against women is ever acceptable.

Once again, in 2019, there have been plenty of opportunities to cover violence against women and gender inequality. In the last 12 months we celebrated the Domestic Abuse Bill coming into law, become enraged by Brett Kavanaugh being sworn into Supreme Court, and mourned Grace Millane, Alesha MacPhail, Poppy Devey Waterhouse, Lucy McHugh, Shana Grice, and countless other victims of men's violence.

All the work shortlisted shows that it is possible to create insightful and well written pieces that sensitively cover violence against women and gender inequality. At the awards tonight, we want to celebrate the writers who are doing just that.

And the winner of Best Piece - News, Sponsored by NUJ Scotland is...

Karin Goodwin for The Ferret and the Sunday National, "Call to Review Domestic Murders to help prevent further deaths". 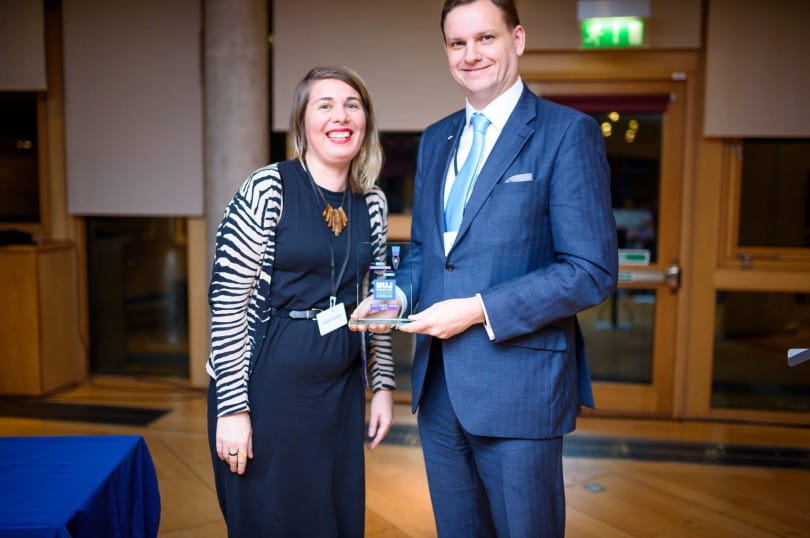 The judges said of the winning piece her that the case studies gave a voice to the victims and the use of statistics showed the scale and gendered nature of the problem, good use of sources from women’s organisations and a strong ending.

The award was presented by Nick McGowan-Lowe from NUJ Scotland.

And the winner of Best Piece - Feature, Sponsored by NUJ Glasgow is... 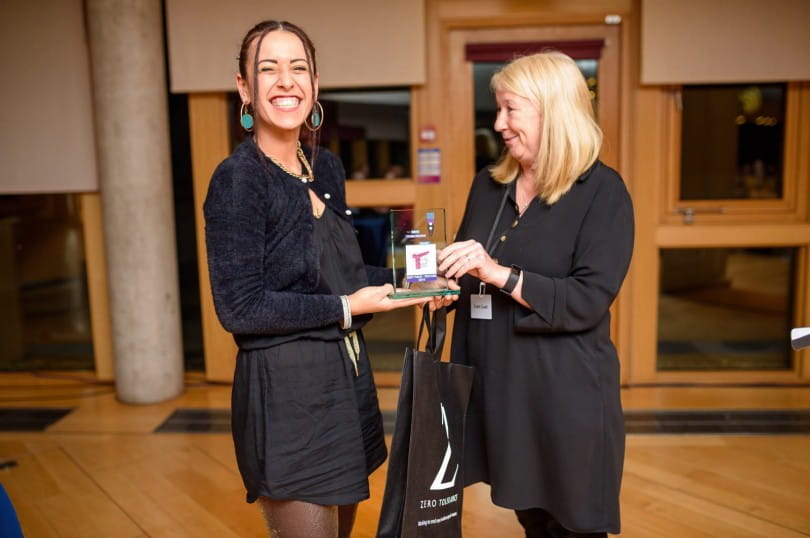 The judges said of the winning piece “tells the story of a rape survivor’s unique way of sharing her experiences and also helping others to open up about their own personal experiences. There’s good use of quotes from support groups and feedback on positive aspects already with a survivor speaking up about her personal experiences after 30 years”.

Mary sadly couldn't join us this evening, so her award will be accepted by Bee on her behalf.

The award was presented by Fiona Davidson from the National Union of Journalists Glasgow Branch.

And the winner of Best Piece - Opinion and Comment, Supported by our media partner the Daily Record is...

Dani Garavelli, for the Scotsman, for "Marshae Jones case shows US is close to dystopian nightmare". 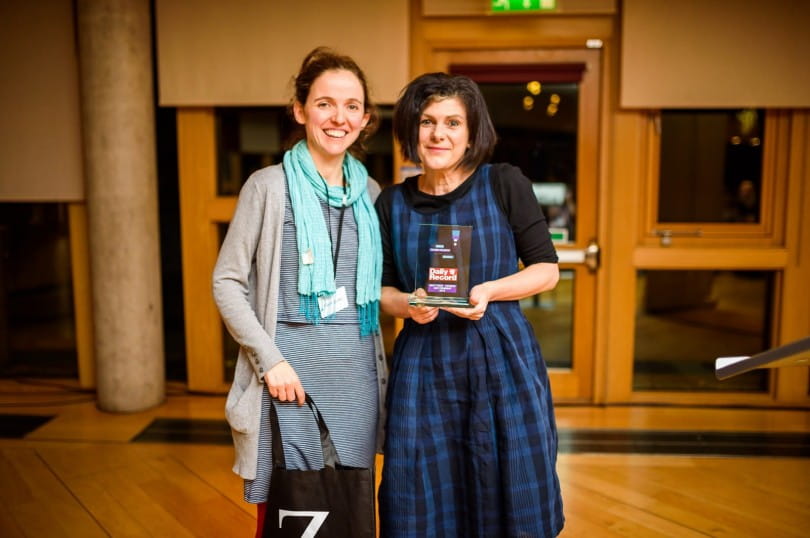 The judges said of the winning piece “the style is powerful, personal yet also international in scope. This important, richly researched piece covered the women's stories with great humanity- and helped the reader understand not just what happened, and what was being said, but what was being meant and the factual and political context of the arguments being made.

Sadly, Lesley Riddoch could not join us on the evening to present the award, so it was instead presented by our Co-Director Rachel Adamson.

And the winner of Best Piece - Blog and Self-Published 2019, sponsored by the University of Strathclyde is...

Elspeth Wilson, for the Engender Blog, for "Why Contraception Needs a Me Too movement" 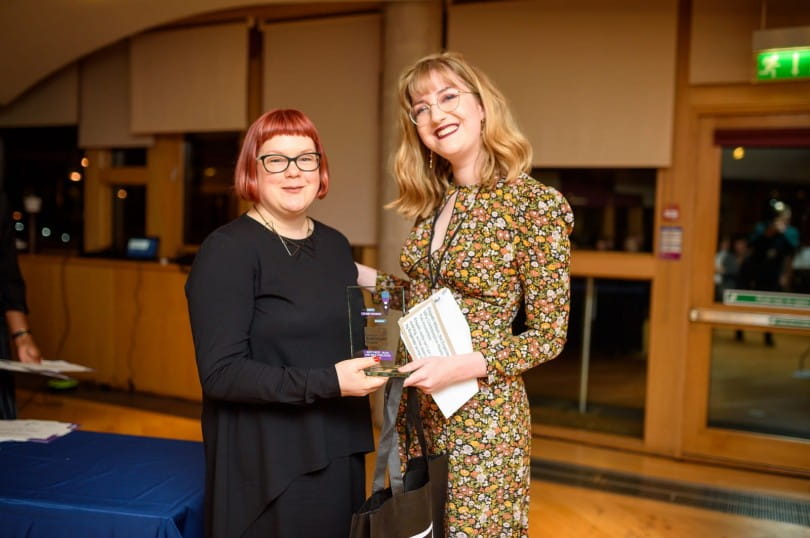 The judges said of the winning piece covers the subject in a way that’s both personal and informative- something that’s difficult to do when writing about such an emotionally charged issue. And it is well-written, clearly evidenced, and thoughtfully considered, placing the history in the context of entrenched gender stereotypes, the privilege and marginalisation involved. It uses appropriate language, is challenging normative assumptions and shines a light on a site of inequality and violation for many.

Sadly Elspeth could not join us on the evening so the award was accepted by Emma Ritch, Director of Engender, on her behalf.

Colleagues from Applied Gender Studies and Media and Communications at Strathclyde are unable to present the award tonight as they are participating in the UCU’s strike action, but send their warm wishes to the winners.

The award was presented by Jenny Constable, the Write to End Violence Against Women Awards Bursary Winner 2018/2019.

And the winner of the Gender Equality Award - Women and Sport 2019 is...

Laura Waddell, for the Scotsman, for "Scotland Women ‘really shake them up’ and may even win World Cup". 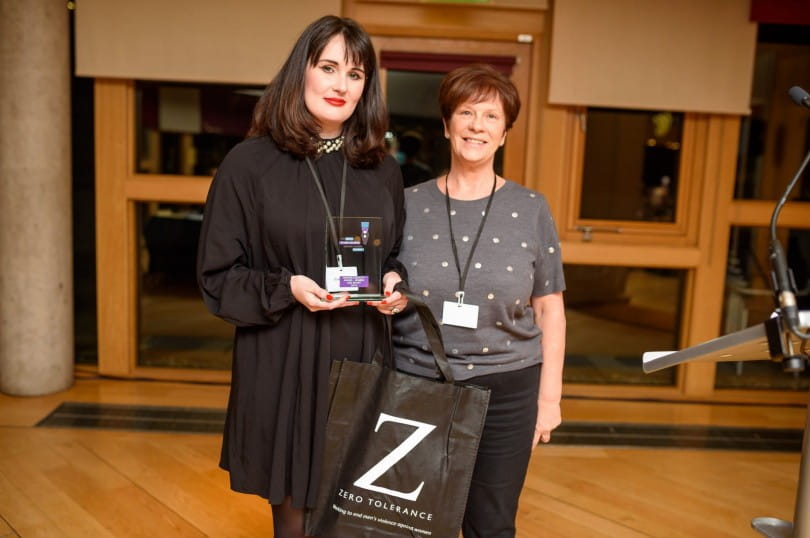 The judges said of the winning piece “is uplifting and well as educational, was also quite inclusive in her terminology and it made me smile”.

The award was presented by Maureen McGonigle, Founder of Scottish Women in Sport.

And the winner of the Wooden Spoon award goes to...

"Sex Game Gone Wrong" as a defense for murder. Fiona MacKenzie, founder of the We Can't Consent to This campaign have a rousing speech calling out the injustice of this. 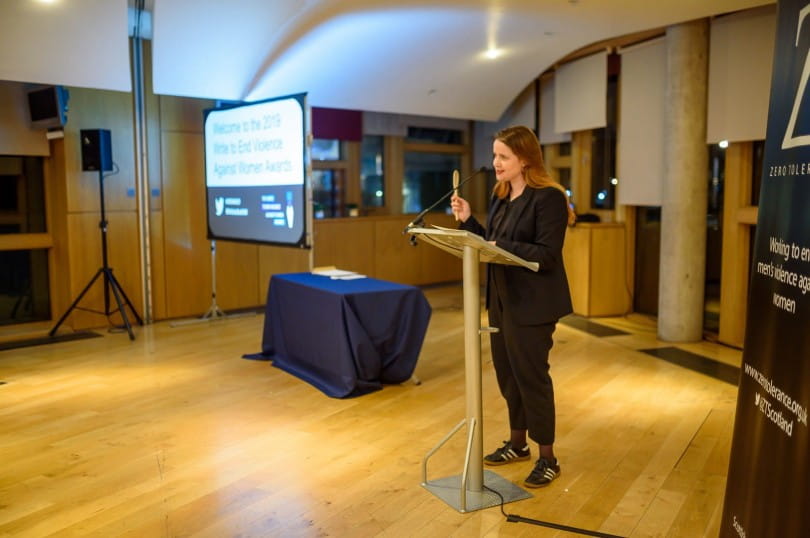 We have seen an increasing number of women and girls killed and injured in violence that is claimed to be consensual. The We Can't Consent to This campaign found in the last 5 years this defence was successful when used in criminal courts in 6 of the 14 killings of a woman, with the man being found not guilty or receiving a manslaughter conviction.

The media reporting of these cases is often uncritical. The coverage sensationalises the story and uses the narrative of the defence as the narrative of a story. Legally, no one can consent to injury or death. Even if a woman has agreed to an act, she may have been coerced into it by an abusive partner. “Sex games” do not kill women, abusive men do.

Find out more about their campaign here.

We have so many thank yous to give!

Thanks firstly to everyone who submitted or nominated a piece. It is truly inspiring to see the quantity of excellent writing in Scotland.

Thank you to the shortlisting committee who managed to turn 196 submissions into just 20 shortlisted pieces.

Read all of the shortlisted pieces here - they are truly fantastic!

Thank you to all of the shortlisted writers!

Thank you to the amazing judges who had the incredibly difficult job of selecting the winners. To give you an idea of how close all the pieces were - almost every category had to be sent to a tie-break judge!

Thank you to our host for the evening Tomiwa Folorunso who welcomed our guests and thanked everyone for all the work they have put in; the judges, our shortlisting committee and our sponsors.

Thank you to Jackie Baillie, MSP, who sponsored our awards at the Parliament and spoke about the importance of the awards and her own role in tackling violence against women in the parliament. She reminded us that reporting on violence against women can raise awareness that it is caused by gender inequality.

Thank you to Bee Asha Singh who blew us all away with her truly outstanding poetry performance - receiving a standing ovation from some of the audience. You can find out more about the her in the documentary Spit It Out created by Aruna Productions.

Thanks to our Co-Director Rachel Adamson, who spoke of the impact of Me Too and the media coverage of this violence. "We need to progress for the most vulnerable women among us. It is in the interests of the powerful and the privileged to divide us. Working together, we can fight back."

Thanks to Briana Pegado for the live Instagramming of the event!

Thanks to Jenny Lester, our Communications and Events officer, for managing everything from the entire process of selecting the winners, organising speakers, venue, and invites, to designing the certificates, live tweeting on the night, and ordering vegan canapes!

And thank you, of course, to our sponsors - NUJ Scotland, NUJ Glasgow Branch, and the University of Strathclyde. The awards would not be possible without your support.

What can you do?

We are looking for feedback on the Write Awards project as a whole. If you follow the awards, nominated a piece, were on the shortlisting committee, attended the awards, or are reading this blog we'd love to hear your thoughts! Please fill in a short survey here.

If you'd like to find out more about the Awards you can read everything there is to know here.

We shortlist and judge the pieces for the Write Awards based on how well they are written and if they follow best practice from our Media Guidelines on Violence Against Women. Find out about these guidelines here.

If you'd like any more information please get in touch with us at info@zerotolerance.org.uk