Our #16 Days of Activism Against Gender Based Violence 2019

Every year we work with activists, community groups and a range of organizations across Scotland to raise awareness on prevention of violence against women during the 16 Days of Activism Against Gender Based Violence.

We've been very busy this year so read our round up of all the events and campaigning we've been doing across Scotland! 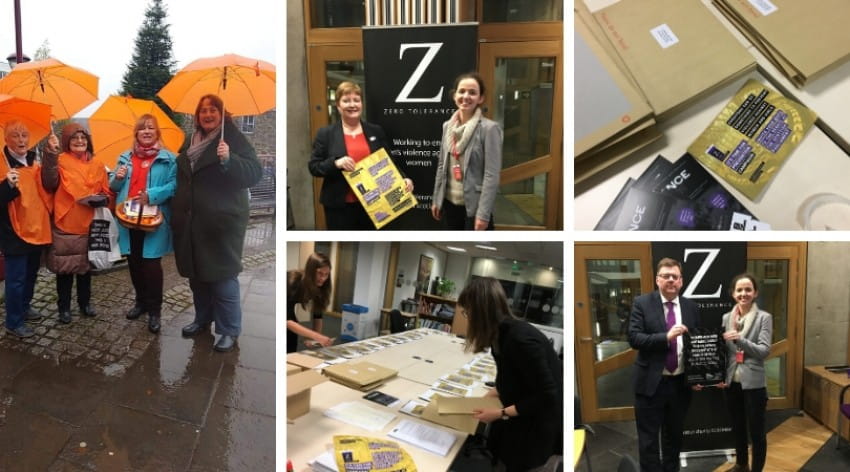 The goal of the #TimeForPrevention campaign was to start a national conversation about primary prevention of violence against women.

We asked members of the public to invite their MSPs to the annual 16 Days of Activism on Gender Based on Gender Based Violence debate at the Scottish Parliament, as last year, just 15% of MSPs spoke at this debate.

Thanks to the support from many organisations, community groups and individuals, members of the public sent an amazing 1,314 emails that reached 111 out of 129 MSPs emails!

It was very disappointing that the debate this year was announced less than a week in advance and it took place on took place on the 27th November between 5.15-6.30pm. Moreover, last year it was a Scottish Government debate, this year it was deprioritised to the less prestigious Members Debate. And that the time for the debate also conflicted with other events at the Parliament on that day.

The content of the debate was of a very high quality, and lots of MSPs spoke about the importance of prevention. However, despite all the emails members of the public sent only 13 MSPs spoke at this debate, comparing to 20 MSPs last year.

We are thankful to those MSPs who decided to speak out, but the low attendance demonstrates that there is still a lot of work to be done to raise awareness on the importance of violence against women.

We will continue to campaign to raise the importance of preventing violence against women and girls. If you want to be informed about our future campaigns, sign up to our mailing list here.

We hosted our annual Write to End Violence Against Women Awards to celebrate journalists and writers challenging violence against women and gender inequality.

The awards ceremony was hosted at the Scottish Parliament by Jackie Baillie, MSP.

We heard from Fiona MacKenzie, founder of the We Can't Consent to This campaign - who called out the injustice of the "Sex Game Gone Wrong" defense.

Bee Asha Singh blew us all away with her truly outstanding poetry performance - receiving a standing ovation from some of the audience. You can find out more about the her in the documentary Spit It Out created by Aruna Productions.

You can read all of the shortlisted pieces here and read about the winners and the awards ceremony here.

Tell it to the Bees

Together with Out At The Cameo, we hosted a film screening and Q & A about violence against LBT women.

Tell It to the Bees (Annabel Jankle, 2018) is a British drama, based on Fiona Shaw’s bestselling novel of the same name. The film follows the love story of two women in 1950s Scotland: single mother Lydia (Holliday Grainger) and small-town doctor Jean (Anna Paquin.)

You can watch panel discussion about the film and more wide conversations about violence against LBT women here: https://twitter.com/CameoOut/status/1201931219514068992

Out at the Cameo are a group of LGBT+ amateur programmers, aged 18 - 25. They focus on screening queer cinema and camp cult classics old and new, as well as creating a welcoming environment for all. 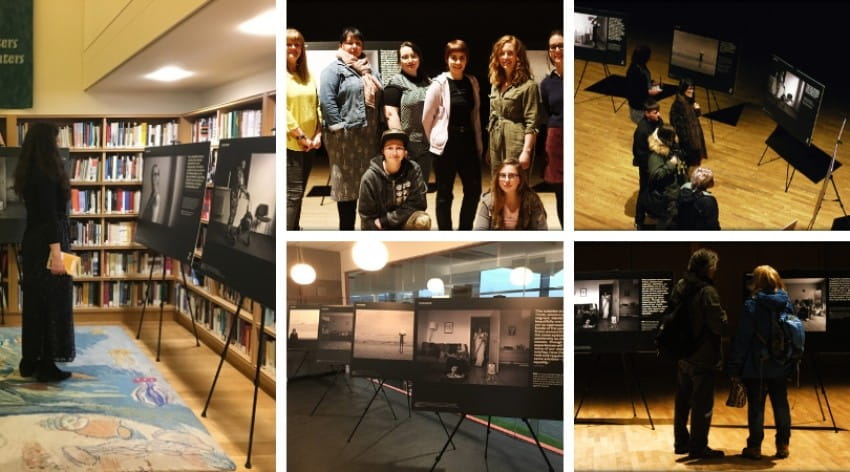 Thanks to our partner organisation Shetland Rape Crisis our Violence Unseen Exhibition visited 3 location in Shetland. Violence Unseen was launched at Mareel on Thursday 21 November and stayed at the arts venue until 24 November and was then displayed at Sumburgh Airport (28 November-2 December) and then Hillswick Wildlife Sanctuary (5-10 December).

Here is a press coverage of the exhibition in Shetland News: https://www.shetnews.co.uk/2019/11/19/challenging-myth-and-helping-victims-of-sexual-violence/

You can also read the review here: https://www.shetnews.co.uk/2019/11/23/review-defiant-dignity-in-the-face-of-oppression/

We worked in partnership with Dumfries and Galloway Public Protection Partnership and Violence Unseen exhibition was displayed as a part of awareness raising activities at Dumfries College and Stranraer College.

‘Violence Unseen Exhibition was placed in an area adjacent to the Library which is attended by College and university students (Glasgow Uni and the University of the West of Scotland)  and students kept on commenting on how powerful VU was. People at the college told me I quote: “It was a total hit!” – Luis Pombo, Research and Information Officer – DA&VAWG

In collaboration with the Scottish Poetry Library, and funded by Book Week Scotland, we hosted a panel discussion between three experts who have worked on and around the writing of VAW. The panel included our own Communications and Events Officer, Jenny Lester (standing in for journalist Anna Burnside), Manager of Forth Valley Rape Crisis Centre, Mridul Wadhwa, and poet Jenny Lindsay, chaired by Nadine Aisha Jassat.

The evening examined questions around the challenges of writing about VAW, the common issues with its language, and how we can improve the written depiction of VAW in journalism, poetry and prose.

After all that busy-ness it is time for a wee break.

We will be back to fight violence against women and gender inequality in a new decade! See you soon!