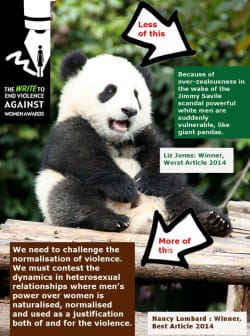 A group of women’s charities, the National Union of Journalists Scotland and media partner, The National Newspaper are encouraging the public to get involved with the 2015 Write to End Violence Against Women Awards and campaign.

The public are invited to submit good (and bad) writing for consideration through the www.writetoendvaw.com website. The winners will be announced in December at the Scottish Parliament.

The media has a vital role in challenging a culture which supports violence. Journalists, editors and other media professionals have the choice aid public understanding of violence against women, or to fall back on stereotypes and sensationalism.

Many journalists, bloggers and student writers produce high quality work which confronts violence and gender inequality. Their hard work deserves to be recognised, and there are several categories to award different types of writing.

Unfortunately, irresponsible writing about Violence Against Women is still too often a feature of media reporting. Therefore the awards include a Worst Article, or ‘Wooden Spoon’ category. Last year's Wooden Spoon “winning” article contains this ‘advice’ to women who are concerned about sexual harassment and assault:

"Don’t dress like a prostitute, or be too drunk to know what you are doing, but beyond that, live your lives. Stop being victims." – Liz Jones, Daily Mail 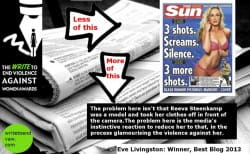 This year’s public campaign builds on the success of the awards themselves, which is now in its third year. As the awards fall between two elections that prominently feature women – with some disappointing press coverage at times – this year's ‘Gender Equality Award’ is themed around Political Reporting and is sponsored by Women 50:50.

Writer, Journalist and Violence Against Women Researcher Anni Donaldson won the inaugural "Best Article" Award. She says this about the importance of good media reporting:

"A great deal of reporting remains voyeuristic and exploitative with victims and survivors’ voices screaming to be heard above the clamour often focussed on the male perpetrators and public sympathy for them. Recent critiques of coverage of the trial of Reeva Steenkamp’s killer and the Ched Evans rape case show what we are still up against. Similarly, revelations of high profile celebrity child sexual abuse predators, the systematic and almost industrial scale sexual exploitation of children and young people by large numbers of men in Rotherham, Oxford and Rochdale all require our continued vigilance in challenging inadequate reporting, biased journalism and in promoting an ethical alternative."

Awards organisers are also delighted to announce that there is a bursary opportunity for an aspiring writer to play a key role in helping to continue to grow the profile of the Awards campaign, while raising the awareness of news consumers as well as journalists and empowering them to take action. For more information, visit the writetoendvaw.com website. 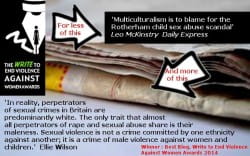 A pdf copy of this press release is available from our Press & Media page.