RESEARCH REPORT: 'How do young people learn about sex?' 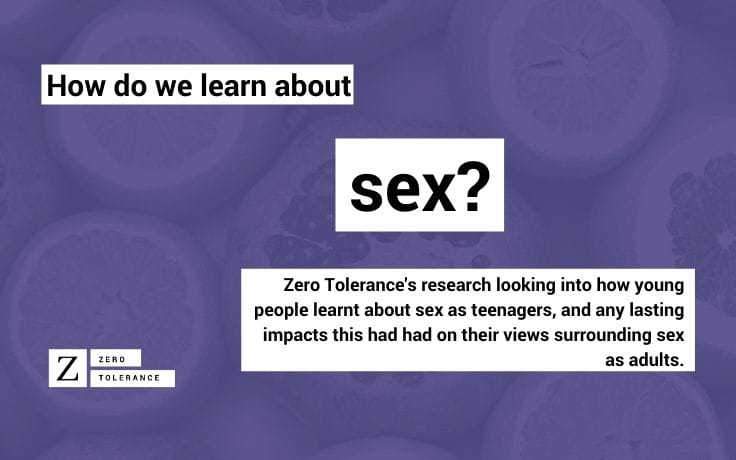 To gain an understanding of how young people learnt about sex as teenagers, Zero Tolerance developed a 22-question survey aimed at 18–25-year-olds, asking them how they learnt about sex as teenagers, what methods they relied on for this education, and how this consequently informed their attitudes as adults. The research aimed to support, inform, and shape Zero Tolerance's future resources and strategy for young people.

The survey was disseminated online and shared through our social media pages in October 2020, leading to 118 analysable responses. 86% of respondents were women, 12% were men, and 2% were non-binary, 42% identified as being LGBT+, and just over 80% of respondents were White British/Scottish/English.

We chose to undertake this project due to Zero Tolerance’s interest in social attitudes around issues that impact gender inequality, the root cause of violence against women and girls (VAWG). Sex education relates to gender inequality due to the ways in which learning about consent, pleasure, and desire can become gendered, and often adhere to gendered stereotypes around how we can and cannot interact with sex, depending upon our gender. Gendering sex education in a way that creates attitudes around sex that are not equal is hugely detrimental to both boys and girls, and creates an environment in which gender inequality thrives.

We would like to thank everyone who responded to the survey; here are some of our key findings:

Many participants made additional comments about the need for inclusion of information around female desire and pleasure within sex education:

“sex education could have been less focused on the biological act of sex and more on the emotional side, more about consent, more about the different types of sex and who with. More about female pleasure, which should be encouraged.”

In terms of how learning about sex in various ways made participants feel, responses were varied. Over half felt ‘curious’ (58%), just under half ‘embarrassed’ (48%) and ‘confused’ (43%). Meanwhile, over a fifth felt ‘anxious’ (31%), ‘aroused’ (28%), and ‘guilty’ (24%). Other emotions commented by respondents were “strained”, “under pressure”, and “inadequate”. Almost four times as many LGBT+ people responded that it made them feel ‘guilty’, 40% in comparison to 12% of heterosexual participants. What’s more, 54% of LGBT+ participants said that learning about sex had made them feel ‘confused’, in comparison to 36% of heterosexual participants.

When responding on how learning about sex made participants feel about their bodies, most responded ‘uncomfortable’ (45%) and ‘dissatisfied’ (40%). Meanwhile, around a quarter responded ‘ashamed’ (25%) and ‘it didn’t make me think about my own body’ (22%). Other responses included “fetishised”, “unsure”, and “my body was for male pleasure only”. 52% of LGBT+ participants answered that it made them feel ‘uncomfortable’, in comparison to 40% of heterosexual participants.

Many of the general comments left at the end of the survey surrounded the consequences of lack of discussions around the emotional sides of sex, and reiterations of pleasure taboos during sex education negatively leaking into adulthood, largely among women participants:

“It made me shy, and very anxious while being displeased about my body. I felt that boys would use me for their own pleasure so didn't partake until I was in my 20s which now makes me feel uncomfortable. I wish I was taught about my own pleasures and how to be more open during sex and maybe it wouldn't feel this way now I am older”

When asked how their learning experiences as teenagers could have been better, many participants responded about the need for education surrounding what is ‘normal’, inclusion of LGBT+ sexualities, asexuality, female pleasure, emotions surrounding sex, and the realities regarding pornography’s representations of ‘sex’:

“There should definitely be more detailed information taught at school about all aspects of sex and sexuality, children shouldn't have to search things on the internet which could potentially bring up images/websites that are inappropriate for them.”

It is worth noting that only 9% of participants responded ‘at school’ as their primary means of learning about sex. This means that more than 9 out of 10 young people are learning about sex primarily outside of school, thus not everyone is getting the same access to information. We must address the fact that young people are left unsatisfied by their sex education and ensure all young people have an equal and sound understanding of healthy relationships and consent.

Considering that the vast majority (72%) of participants identified first learning about sex aged 13 and under, it is important to consider the ways sex is presented to young people within wider society, as the majority of learning about sex within an education setting does not come until after this age. As most respondents identified learning about sex through their peers (31%), it is important to question where those peers, also underage, are getting the information about sex that they are then sharing. The increasing prevalence of the internet in our lives means that more young people are getting information online (53% selected ‘social media’ as one of their means of learning about sex as a teenager, whilst 8% learnt most from ‘social media’, and 3% learnt most from other online platforms e.g. ‘YouTube’ and ‘Fanfiction’). It is important to focus on ensuring that the information they are getting is as sensitive, accurate, and feminist as possible, to ensure that when this information is then, inevitably, shared among peer groups, it does not perpetuate harmful attitudes surrounding sex.

“Social media accounts talking about inclusive queer intersectional sex, sexual health and healthy relationships are amazing and I think the school system and media moguls have a huge amount to learn from these thought leaders.”

However, it is important to ensure young people are receiving adequate sex education elsewhere that is both representative, informative, and unthreatening, so that they do not become dependent upon internet chambers for this information.

The overarching findings from this survey are the demonstrable gender imbalance in young people’s learning about sex when it comes to gendered desire and pleasure, and the differences in young LGBT+ people’s learning about sex in terms of the way it made them feel about themselves – largely confused and excluded. Young people very clearly desire intersectional and representative sex education that is centred on reality and equal pleasure. It is essential that we provide it for them.

Here is the link to our full report, with more detail on our findings from this research:

Research Report: How do young people learn about sex?