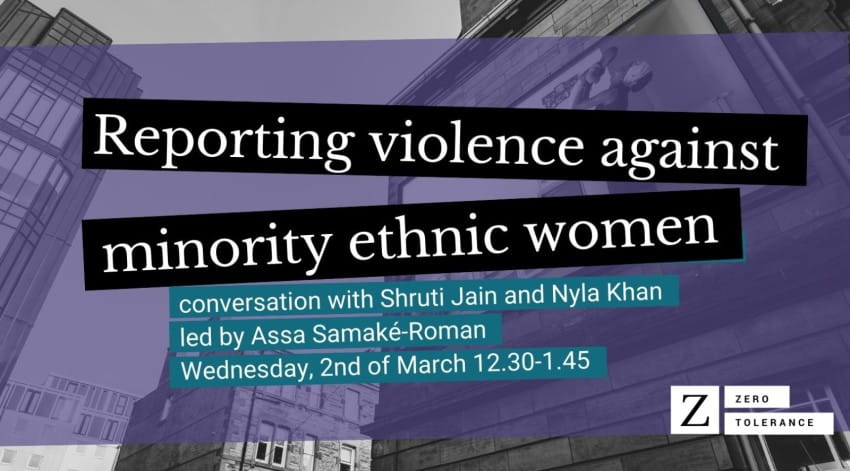 This online event aims to help journalists and editors to more fairly and accurately report on violence against ethnic minority women and girls and will discuss how to engage ethically with misrepresented and underrepresented communities. The talk will be given by Shruti Jain - Chair of the Sahelya a specialist mental health and well-being support organisation for black, minority ethnic, asylum seeker, refugee and migrant women and girls and Nyla Khan - lived experience leader, forced marriage survivor, campaigner to end forced marriage and founder of Universal Truth - aftercare service for women who are moving from abuse. Discussion will be led by an Edinburgh-based journalist Assa Samaké-Roman.

Shruti Jain is a Chairwoman of Saheliya, a specialist mental health and well-being support organisation for women and girls (12+) with experience of racial inequality and gendered abuse in the Edinburgh and Glasgow area. She is passionate about dismantling the structural and systemic inequalities that exist for marginalised and vulnerable communities that extend through healthcare, housing, education, employment, immigration and access to justice. Shruti works in public health at Public Health Scotland, and was highlighted as a Charity Leader to watch out for in 2022 by the Charity Times.

Nyla Khan is a woman who cannot be put into a box no matter how hard family members and communities may try. She has surpassed every block that was put in her way following her forced marriage and her purpose in life is to demonstrate that all women can follow the same path. Nyla has healed herself and is living her life’s purpose which is to share her story and start Universal Truth so to be a role model that most ethnic minority women don’t have or can use more of – a successful and independent woman who surpassed tradition and limitations that were placed on her by archaic cultural conditions which resulted in community isolation tactics and silence in the name of honour. Thus, Universal Truth was born - a subjective, inclusive platform refrained from judgement where difference is celebrated and not something that is feared; a platform where all are received with unconditional love and supported throughout to develop this same love for the self and the rest of the universe. BBC Scotland held an interview with Nyla where it reached audiences all over the world. She has also given workshops to local organisations and public service entities. In addition to this, Nyla has over 13 years of experience in social services in Scotland.