Every year, through the Write to End Violence Against Women Bursary, Zero Tolerance works to help launch the career of an aspiring journalist who is committed to tackling violence against women and its cause – gender inequality.

The recipient is paid to write news and feature pieces covering these topics in a sensitive and responsible way. These pieces are then published in a national newspaper.

Reporting on violence against women and gender inequality can play a vital role in increasing understanding and challenging their place in our society.

In 2019/20 we will be working with the Daily Record who will be jointly commissioning articles, our bursary winner this year is Poppy Joy Watson. We are very excited to read her articles that will be written this year! 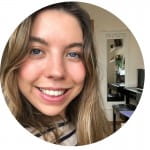 My name is Poppy and I’m from a small village in the Highlands. I graduated with a degree in English, Journalism & Creative Writing from the University of Strathclyde in 2018, before setting off to Australia on a working holiday. I’m now studying for my NCTJ Diploma at Glasgow Clyde College. Being awarded the Write to End Violence Against Women Bursary is one of my proudest achievements and I have since had the opportunity to work with some incredibly inspiring people at Zero Tolerance and the Daily Record. I feel much more confident about my future job prospects in the journalism industry now I have experience writing for a national newspaper.

Here are my articles published in the Daily Record:

Domestic abuse and lockdown: The rules

‘Stay at home, protect the NHS, save lives.’

This was the key rhetoric of the UK government for two months up until this week and in Scotland, it remains so.

But for women living with an abusive partner – victims of a pandemic that has been around far longer than coronavirus – home is not a safe option.

Despite this, it has emerged many are afraid of the police response if they violate lockdown rules by fleeing.

Dr Marsha Scott, chief executive of Scottish Women’s Aid, said: “The messaging hasn’t been clear that one of the reasons it’s okay to leave your home is if you need to minimise your risk of domestic abuse… we are working with the government and police at the moment to rectify this.”

The Scottish Government has underlined that the reference to escaping a risk of “harm” in the coronavirus regulations includes fleeing any form of domestic abuse.

But the message is failing to make an impact.

Dr Scott reveals the Domestic Abuse and Forced Marriage Helpline has heard abusers have threatened to call the police if they try to leave.

She said: “We have had several queries from women seeking to take themselves and their children to a relative’s by using public transport but concerned they will be returned home by police.”

The police are keen to stress this will not happen.

Detective Superintendent Debbie Forrester, Head of the Domestic Abuse Task Force, said: “It is so important that people understand that we are here to help. We will continue to treat reports of domestic abuse as a priority, we will listen and we will investigate. Your safety is our priority.”

And it is evident their support is needed.

Calls to the National Domestic Abuse helpline run by Refuge have risen by 49% since lockdown measures were introduced, while researchers at the Counting Dead Women Project found killings doubled in the first three weeks of lockdown.

This has driven UK businesses to step in and help.

Train companies nationwide are offering free travel to those fleeing domestic abuse through a partnership with Women’s Aid.

And now Boots pharmacies have introduced a scheme to help victims access support from a safe place. People living with domestic abuse can ask staff at the counter to use the consultation room, where they will be able to contact services for help and advice.

UK Ministers have also recently announced a £76m fund to help victims of domestic abuse and rough sleepers, while the Scottish Government will boost Scottish Women’s Aid with an extra £1.35m over the next six months.

There is still help available during lockdown.

All Women’s Aid services in Scotland are still running and offering support.

Dr Scott said: “Our Domestic Abuse and Forced Marriage Helpline is still 24/7… and in case people are concerned about being overheard, they can communicate with us via webchat or via email.”

Co-director of Zero Tolerance, Laura Tomson, said: “Coronavirus has proved we are capable of taking drastic action to protect each other. It is important to support women through this time. We also have to think about changes that need to happen to end gender inequality and violence against women.”

If you or anyone you know are at risk of domestic abuse, please call Police Scotland on 999 in an emergency or contact the domestic abuse and forced marriage helpline on 0800 027 1234. Help is available 24/7. 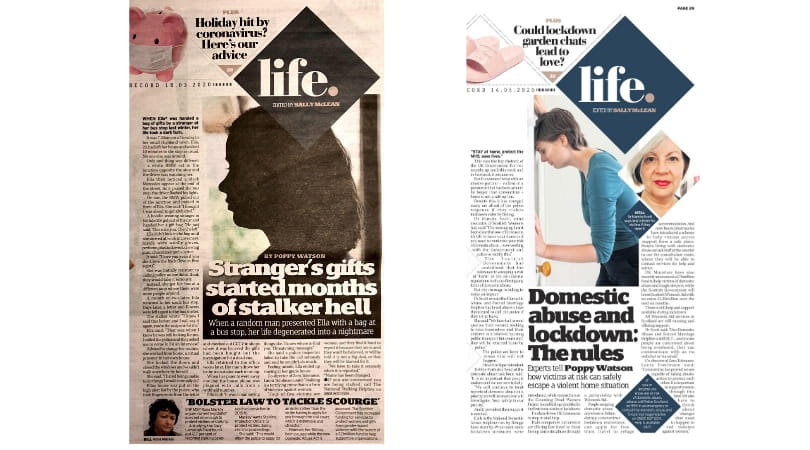 When a random man presented Ella with a bag at a bus stop, her life degenerated into a nightmare

When Ella* was handed a bag of gifts from a stranger at her bus stop last winter, the 23-year-old’s life took a dark turn.

It was 7:20am on a Tuesday in her small Highland town. Ella had just left her house for work and walked ten minutes to the bus stop as usual. No one else was around. Only one thing was different - a white BMW sat in the junction opposite the bus stop and the driver was watching her. Ella then noticed a black Mercedes appear at the end of the street. As it passed the bus stop, the driver flashed his lights. On cue, the BMW pulled out of the junction and parked in front of Ella. She said: “I thought I was about to get abducted.”

A hoodie-wearing stranger got out of the car and handed her a gift bag. “He just said ‘this is for you’. Then he left.” Ella didn’t look in the bag until she arrived at work in Inverness. Inside were woolly gloves, perfume, plastic flowers, chewing gum, chocolates, and a letter.

It said: ‘I love you even if you don’t love me back (love at first sight).” She was initially resistant to calling police as she didn’t think they would take it seriously. Instead, she got her bus at a different stop where there were more people around.

A month or two later, Ella returned to her usual bus stop. Days later, a letter and flowers were left taped to the bus shelter.

The stalker wrote: ‘I know I said this before and I will say it again, you’re the only one for me.’ Ella said: “That was when I knew he was obviously still looking out for me. I called the police from work and they asked me to come in for an interview.”

Advised to change her routine, she worked from home, a virtual prisoner in her own house. She locked the doors and closed the windows and wouldn’t walk anywhere by herself. She said: “I hated being unable to do things I would normally do.”

Ella’s house was put on the high alert list by the police, who took fingerprints from the letter and checked out CCTV in shops where it was believed the gifts has been bought, but the investigation hit a dead end.

Ella returned to the office weeks later. Her mum drove her to the train station each morning. When her parents were away one day, the house phone was plagued with calls from a withheld number. Ella said: “It was a man saying things like, ‘I know where to find you.’ Threatening messages.”

She said a police inspector failed to take the call seriously and said he couldn’t do much. Feeling unsafe, Ella ended up staying at her gran’s house.

Co-director of Zero Tolerance Laura Tomson said: Stalking is a terrifying crime that is a form of violence against women.  Four of five victims of stalking are women and they find it hard to report it because they are scared they won’t be believed, or they’ll be told it is not a big deal, or that they will be blamed for what happened to them.  We have to take it seriously when women report it.

*Name has been changed.

SNP MSP Rona Mackay argues current legislation does not do enough to protect victims of stalking.

A study by the Suzy Lamplugh Trust found just 12.7 per cent of recorded stalking cases reached conviction in 2015-2016.

She said: “This would allow the police to apply for an order, rather than the victim having to apply for one through the civil court, which is expensive and stressful.”

However, her Bill has been paused while the new Domestic Abuse Act is assessed.

The Scottish Government has increased funding for services to protect women and girls from gender-based violence with the launch of a £13 million fund to help supportive organisations.