What should an ideal Scottish male leader look like? 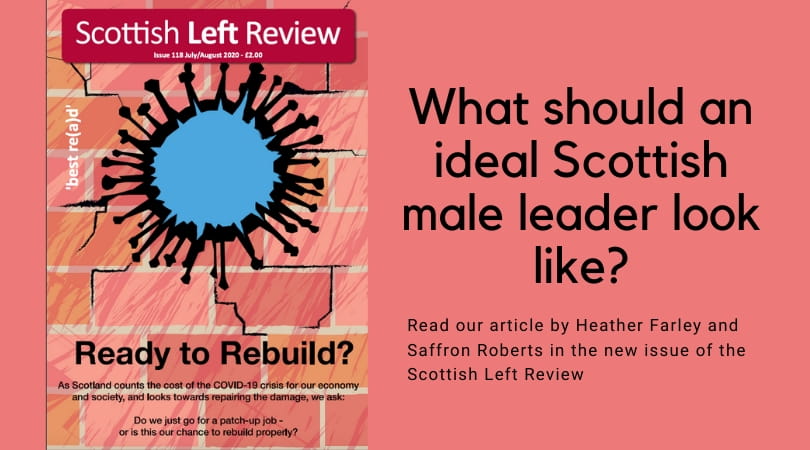 What should an ideal Scottish male leader look like?

Abuse of power by leading men has dominated the headlines in Scotland over recent years. Yet, compared to England’s leading men, with Johnson’s ‘letterbox’ comments and Cummings’s Durham trips, you’d be forgiven for thinking Scotland was, relatively speaking, progressive. Yet this is far from true; from harassment accusations by female colleagues to unsolicited messages to teenagers, men in powerful positions in Scotland are in disgrace.

In this climate, what should a man in a powerful, public leadership role look like? Charisma is often listed amongst crucial leadership qualities, but this is often problematic and male-centric. Charisma is something that has long been used to justify men’s actions when they behave poorly in the name of ‘charm’. The National (11 February 2020) talked of Derek Mackay: ‘while not now in any way condoning his despicable private behaviour, recall[ed] his wit and charm on public occasions in the past’. Here, we have an example of that ‘essential’ leadership charm that men are allowed to keep, often alongside their positions of power, even after accusations rife with predatory behaviour.

Scottish parties appear united in their scandal. In 2018, Tory MP, Ross Thomson, was drawn into the public eye when another MP accused him of ‘unwanted physical touching’. Thomson stepped down from his position, after another instance of ‘inappropriate sexual touching’, though continued to deny all accusations against him.

Leadership that utilises threatening behaviour to assert dominance goes far beyond the spheres of politics. STV in early October 2019 reported that Forres Police station in Moray is claimed to be home to a ‘boys club’ of officers who, in addition to a number of other such acts, made the headlines for driving a woman officer into the woods in the middle of the night and abandoning her ‘to ‘teach her a lesson’ after she made a report of domestic abuse and sexual assault against her police officer ex-partner’.

Abuse of leadership not only impacts the individuals harmed, but influences community attitudes regarding what authority figures and men can get away with. These attitudes present ‘get-out-of-jail-free’ cards and prevent survivors from seeking help and reporting the crime. Abuse of power by individuals is damaging to the systems that they represent, and to the youth for whom these people should resemble role models.

So, the question we should, instead, be asking is not what makes a good male leader, but what makes a goodleader. Men and women should not have to conform to different standards, especially when it comes to positions of power. In 2020, when we are teaching our children that their identity does not and should not limit their aspirations, we must also acknowledge that both stereotypically ‘feminine’ and ‘masculine’ characteristics belong in our leaders. In doing so, we must be careful not to maintain the hegemonic binary that suggests that ‘feminine’ traits exist only to support and cushion more leader-like ‘masculine’ traits. This rhetoric is condescending and encourages the idea that leadership is for men, and that ‘feminine’ qualities in leadership can only be implemented by men.

Further to this, when we dismantle the gender binary, enabling all genders to express themselves and lead in a way that reflect their politics, circumstances and personality, we must do so in a way that acknowledges the structural inequality that women and other marginalised people experience. This means cis-gendered, white men and women in power acknowledging their privilege while actively facilitating and developing organisations that are representative of the diverse society we live in.

Concrete steps must be developed and taken to address gender inequality in all areas of our lives, and to achieve full social, economic and political equality we need more women in positions of power. It is imperative that these processes facilitate more leaders that identify as LGBTQI+, are disabled, or are black or from an ethnic minority. Dismantling the gender-binary does not mean that we aim to be gender-blind. We must see gender, as only in having constant awareness of traditional gender norms and the oppression that they present can the gender binary be dismantled. Taking responsibility for gender inequality, while enabling a leadership which is fully representative, is the only way forward for Scotland.

There is a long way to go in addressing the power imbalance created by men’s oppression of women and girls and to change this we need good leadership at all levels. We need to replace domination and repression with power based on empowerment, mutual support, and collaboration. A good male leader looks the same as a good person who is also held accountable for their actions. Otherwise, we end up with a community both ruled and influenced by predatory criminals.

In these troubled times, we should be aspiring to a male leader who can deal decisively but empathetically with a major terrorist attack, a volcanic eruption, and a pandemic all in the first term of office, at the same time as caring for a newborn. The female version is known to us all.

Heather Farley and Saffron Roberts are Project Support Interns at Zero Tolerance. Heather is a recent graduate in International Relations from the University of St Andrews. During that time, she ran a student-led Got Consent initiative which educated students in bystander intervention. Saffron is a recent Edinburgh English Literature graduate and activist. In early 2018, she founded the campaign Period Poverty Edinburgh.