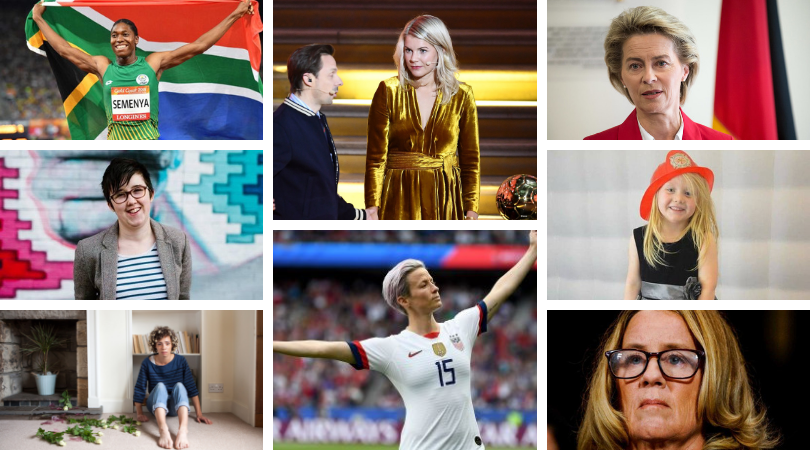 Let’s look back on what we have achieved, uncovered, and are yet to overcome.

If you have read or written something thought provoking on any of these topics, or Violence Against Women more generally why not submit it to the awards?

Saturday 13 October – Police urge women not to use headphones or mobile phones when walking on their own.

Early November – Police were investigating sexual harassment allegations made against Alex Salmond. The case will be heard in January 2020 at the high court Edinburgh.

Monday 3 December - Norwegian footballer Ada Hegerberg is the first woman to win the Ballon d’Or. Prior to her victory, which previously has been awarded to a men’s player since 1956. Her moment was overshadowed by DJ Martin Solveig who asked if she could twerk.

Wednesday 5 December – 22 year old Grace Millane is reported missing in Auckland, New Zealand. It was revealed on 8 December that she was murdered by a man.

Wednesday 30 January – it was announced that judges and sheriffs in Scotland will receive training around what psychological domestic abuse is.

Thursday 31 January - Two of the five students from Warwick University who spoke about raping their fellow students had previously been banned from the university for 10 years. Two of them received a 10-year ban, which was then reduced to 12 months after they had appealed the decision. The University now say that the boys will not be back.

Saturday 22 February – Alesha MacPhail’s killer’s name is revealed. He kidnapped Alesha, before raping her and then murdering her.

Thursday 21 March – Aaron Campbell receives a life sentence for the raping and murder of Alesha MacPhail. A lot of articles glorified the assailant, describing him as “popular Campbell” and was “excelling at maths” or framed him as a “monster”. Find our guidelines for how to report on Violence Against Women here.

Friday 5 April - Joe Atkinson found guilty of killing Poppy Devey Waterhouse. A few articles glorified the perpetrator’s graduate status and referred to Poppy (his then girlfriend) as his ‘university sweetheart’. Poppy, too, was a graduate however, many articles failed to mention this.

Thursday 18 April – Lyra McKee, a journalist, writer and campaigner from Nothern Ireland was shot dead in Londonderry whilst she was covering a riot.

Tuesday 7 May – Alexander Heavens who admitted to controlling his now ex-girlfriend (Stacey Booth) and physically abusing her has been spared jail. Heavens only was given a 12-month community order and received a ban on contacting Stacey Booth. The judge (Martin Rudland) told him “there are lots more fishes in the sea and watch how you go.”

Tuesday 14 May – Aaron Campbell who abducted and raped Alesha MacPhail before killing her has been allowed to appeal against his sentence.

Monday 3 June – Olympic 800m champion Caster Semenya is ordered to restrict her testosterone levels imposed by the Association of Athletics Federations’ (IAAF). Switzerland’s Federal Supreme Court suspended an IAAF ruling on this. However, Semenya lost her appeal against IAAF after they did not allow her to compete in women’s events unless the reduced her natural testosterone levels. Semenya will now not be allowed to compete in the 2019 World Athletics Championships in Doha in October 2019 because the Swiss Federal Supreme Court reversed their earlier suspension.

Friday 7 June – Sally Challen did not face a retrial after she killed her husband who abused her.

Friday 7 June – Lesbian couple physically abused by group of men because they refused to kiss infront of the men for their ‘entertainment’. We need to recognise the intersections of different forms of inequality e.g. gender and sexuality and how they combine to create multiple levels of discrimination.

Tuesday 2 July – Germany’s Ursula von der Leyen elected as the President of the European Union Commission after MEPs vote. She is the first woman to hold this position.

Monday 8 July – Piers Morgan calls Megan Rapinoe ‘arrogant’ and that she ‘sure does love herself’ after he tweeted an image of her wide her arms spread open after scoring against France.

Friday 19 July – 13 year old Lucy McHugh raped and stabbed 27 times by Stephen Nicholson jailed for life. One headline read ‘Lucy McHugh, 13, ‘murdered after pregnancy claim’ implying that Lucy was killed because she told the assailant that she was pregnant rather than because Stephen decided to kill her. Find our guidelines for how to report on Violence Against Women here.

Tuesday 30 July - Michael Lane, who stalked and murdered Shana Grice has been imprisoned for 25 years. She reported him to the police several times but she was ignored; instead, she fined £90 for wasting police time.

Saturday 10 August – Jeffrey Epstein found dead in cell. He was convicted of sexually exploiting girls under the age of 18 between 2002 and 2005 in his Manhattan and Florida residence.

Sunday 11 August – Dani Bradford, a former undergraduate at Cambridge University spoke out about her experience of reporting sexual harassment against a supervisor to the institution. Read Dani’s full Twitter thread here.

Wednesday 21 August – Equality Union inundated with complaints of sexual harassment and assault from workers and performers at the Fringe Festival.

You can still enter your writing on gender equality or violence against women to the Write to End Violence Against Women Awards until midnight on Monday 30 September.