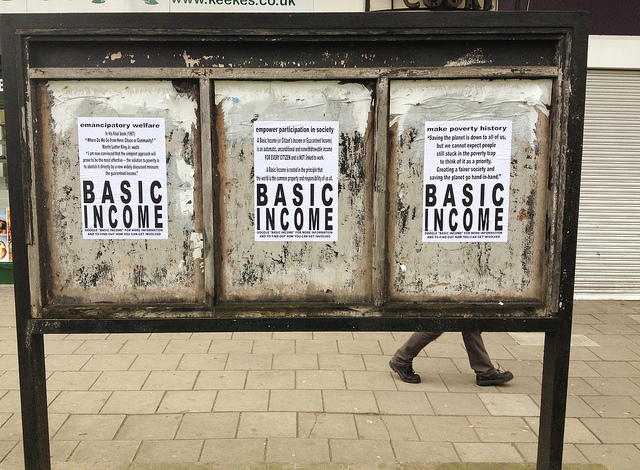 In January Women in Scotland's Economy (WISE) hosted a conference on feminist economics to celebrate and continue the life work of much missed 'feminist legend' Ailsa McKay. The event covered a wide range of feminist economic issues, from childcare to gender budgeting – all of which have massive implications for gender equality and violence against women (VAW) prevention.

The penultimate session focussed on a citizens’ income (also know as “Basic Income” or “Universal Income”), a concept which has gained publicity recently as an aspect of the Green Party's social security policy and as a radical way to re-organise our social security system. The basic premise is that every individual would be given an amount of money that is enough to live on, and most other benefits would be removed. It has been described as being 'like child benefit, but for everyone'.  It would be paid to the individual, with no means-testing, removing both the stigma and unwieldy expensive bureaucracy of our current social security system.I do not mean to suggest that a citizen's income by itself would end gender inequality or prevent violence against women. That being said, it is possible to envision three ways in which a successfully implemented basic income could support the prevention of violence against women.

1. It could prevent financial abuse.

We know that domestic abuse is an abuse of power and a form of control. The current benefits system actively creates power imbalances that can facilitate financial abuse and coercive control. In order to receive job seekers allowance or housing benefit the incomes of both people in a couple are taken into account. On even a relatively modest salary you can be expected to fully support your partner. This situation creates a massive power imbalance where the earning partner has full control of the finances in a couple, secure in the knowledge that the non-earning partner has no money of their own. If everyone was entitled to their own basic income, women would have access to a level of financial control that is actively denied by the current system.

2. It could support women to leave abusive relationships.

As mentioned earlier, women living with their partners, who are either unemployed or unpaid carers are not entitled to any benefits (such as housing benefit, or JSA) in their own right. This creates a significant financial barrier for women who need to leave an abusive partner. For many women, the choice may be a stark one: stay with an abusive partner or risk homelessness. The combination of the costly deposits often required by letting agents and landlords and the amount of time it takes for housing benefit to be awarded creates more obstacles during what is already a very risky time – women are at the greatest risk of homicide at the point of or immediately after splitting up with their partners. A citizens’ income could give women the means to save money for rental deposits and other necessities. It would also take away the need to navigate our complex welfare system at a time when women are already under extreme stress. There are many non-economic reasons that women do not leave abusive men which would not be affected by this kind of policy; however a citizen's income could take away the financial imperative to stay in an abusive household and give more women the resources and confidence to leave

3. It could prevent commercial sexual exploitation.

Commercial sexual exploitation, prostitution and sex work are easily the most contentious issues in modern feminism. Despite entrenched divisions around this issue, one thing we could all potentially agree on is the fact that poverty should not force women into the sex industry against their will. By providing a stable basic income, the compulsion to enter the sex industry as a result of poverty could be significantly reduced. To find out more about other aspects of citizens’ income check out the Citizen's Income Trust.