Skip to menu Skip to content
Home|News/Views|Views|Views|Spotlight on the media: why are we still blaming the victim?

Spotlight on the media: why are we still blaming the victim?

This March, our intern Jenny is blogging about the results of her media monitoring study. She’s been scanning Scottish newspapers for stories about violence against women to get an idea about the state of media reporting in Scotland. Read her first blog here,her second here, and her fourth here. 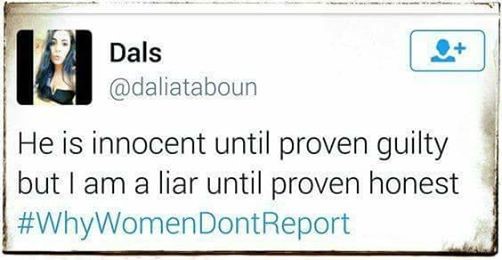 When reading the 57 stories as part of this project I was trying to gauge who the story make us want to believe. This is a difficult line to tread for journalists when reporting on stories of the cases have not been through court. If charges have not been risen and gone through due process we must assume that the alleged perpetrator is innocent until proven guilty. However, the assumption of innocence should also be extended to the accuser - the women who come forward also deserve fair treatment in the press and assumption of innocence. What I mean by this is that being neutral towards the accused should not mean framing a woman who has come forward as distrustful, malicious, or unrapeable. During this project, three stories stood out as being highly distrustful of the women they were about:

The Times story covering Sophie Spatz’s accusation of the French politician Gérald Darmanin describes her as a, “former call girl"1. It is difficult to see another reason that her previous job is included, other than to try to discredit her. It should be exceedingly obvious that her previous career is not relevant to her claims. Would the writer have chosen to describe her with her previous career if she used to be a nurse? Or a teacher? Referencing her previous employment in prostitution, is not only irrelevant, it actively encouraging damaging myths that women who sell sex cannot be raped, lie about rape, or that they are in part to blame for rapes. It is disappointing to have to state that women who sell or used to sell sex have a right to their bodies. No man has the right to a woman's body.

2. Worried for her mental health

One of the main stories that was covered in the 5 day period was about Jessica Moore’s accusations that she suffered abusive behaviour from her estranged husband Nick Knowles, a B-list TV personality. Most of the reporting of this story frames it as Moore running a smear campaign against a normal, friendly, family man in order to extort him for money in the divorce. It is frustrating to see journalists so ready to suggest that she is making the whole thing up for money. The case has not been reported to the police, or gone through court but stories continually describe Knowles in sympathetic language, such as “distraught”. And repeatedly reads as if the story is about the fact that she wants more money from him, not about the claims of abuse - with one stories headline reading “DIY Nick pays ex £48,000 a year”2. Many more describe her in language which makes it seem like she is not trustworthy and her claims are false, one calls her, “very bitter”3, another cites Nick being worried for Jess’ mental health4. Calling women crazy is a long standing sexist tactic to doubt the credibility of women’s words by invoking problematic mental health stigmas5. Without waiting for a verdict, these journalists have implied that Moore is lying - this creates a hostile environment for other women to come forward as they are worried they will not be believed either.


3. After she dumped him

The worst story by far is the Mirror’s coverage of a murder of Molly McLaren by Joshua Stimpson. The story is not attempting to claim that Stimpson is innocent; he has already admitted to the crime; it is attempting to say that it isn’t his fault. The story, by Flora Thompson, titled Killer "unable to take being abandoned”, describes the man as, "hypersensitive to rejection", "after his mother left", meaning he was "desperate to avoid abandonment". Thus “after she dumped him”, he was distraught, and that along with an, "abnormality of mental function" resulted in her murder.6
The story is focused completely on him, leaving Molly McLaren to be largely invisible in the narrative of her own murder. Not only this, but it attempts to excuse his behaviour and amass sympathy for Stimpson, by blaming mental health problems and Molly herself. The coverage of this story made me so angry, and then really sad. As it is really depressing to have to write this next paragraph in 2018 but in response to this I feel like I have to:

Women are allowed to leave relationships. Women do not deserve to be murdered for leaving relationships. Being a woman who wants to leave a relationship is not a crime; murder is. Lots of people have abnormalities of mental functions and don’t murder people. There is no excuse for murder, even if you are really, really sad. It was Joshua Stimpson that murdered Molly McLaren, not his hurt feelings.

These three stories highlight a societal problem of where blame and trust is placed in cases of violence against women. Trust is not often extended to women7 - especially women who sell sex or have sold sex8, women of colour9, and disabled women10. This lack of trust is perpetuated by a patriarchal media that reports on stories in this way.

Women read these stories and the stories shape their understanding of what happens if you come forward. An expected lack of trust makes it difficult to come forward - women are scared of not knowing if they will be believed, and how they will be treated in the press. In 2015-2016 in Scotland there were 58,104 incidents of domestic abuse11 and 1,809 rapes or attempted rapes recorded by the police12. As high as these figures are, they would be higher if we created a society that empowered women to speak out.

This is why the #Metoo and the Harvey Weinstein coverage seems to have sparked a wave of women coming forward in lots of different industries. Women now feel we will be believed. When we read stories of brave women coming forward this can spark a desire to come forward ourselves, either for help or to seek justice. So it is important to have the helpline next to stories.

It is really disappointing that no stories did this.

Scotland’s domestic abuse and forced marriage helpline – 0800 027 1234
Scottish Women’s Aid runs a helpline, open 24 hours a day, 7 days a week, which supports anyone with experience of domestic abuse or forced marriage, as well as their family members, friends, colleagues and professionals who support them.