Skip to menu Skip to content
Home|News/Views|Views|Views|Sexism is a waste: the need to tackle violence and misogyny in Scotland’s workplaces

Sexism is a waste: the need to tackle violence and misogyny in Scotland’s workplaces

In this blog, Zero Tolerance Educators and Employers Development Officer Amy Marshall discusses our latest report on violence against women in the workplace.

In Scotland, the number of women in the workforce is increasing. As of 2015 over 70% of women are in form of employment. However the fact that we see more women in the workplace doesn’t necessarily mean we have achieved gender equality. The enduring pay gap1, caring responsibilities2, and male violence remain powerful factors which concentrate women in precarious low wage economies where they are vulnerable to exploitation3.

In 2016 the Trade Unions Congress (TUC) presented its findings on women’s experiences of sexual harassment across the UK4. At Zero Tolerance we recently published our own research which shed a light on similar experiences from women in Scotland. Over 70% of respondents to our survey said they had experienced or seen sexual harassment, teasing or innuendo, and a further 1 in 10 respondents reported experiencing mental or physical abuse at work. 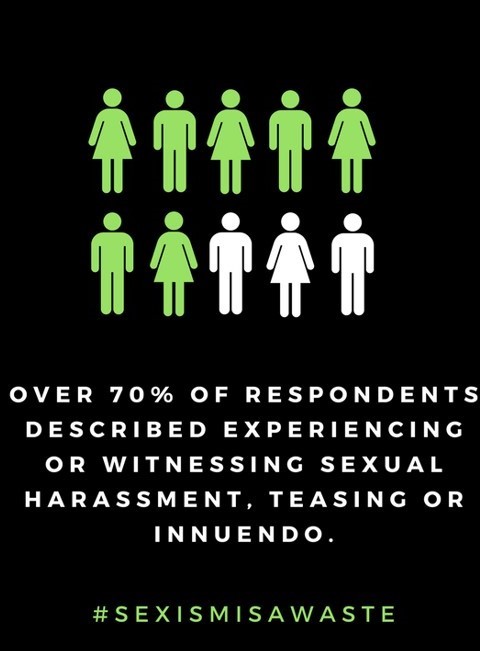 It can be tempting to think of harassment at work as a thing of the past, however testimonies from our respondents suggest that this is not the case.

“He suddenly stopped and said ‘you are so unbelievably beautiful’. I just kind of laughed awkwardly and tried to change the subject. He later said he’d like to get me alone ‘to see if I was beautiful all over’. He returned later to get me alone with no security cameras. When I reported to my line manager he did nothing, simply saying he was a customer and there was nothing he could do”

Wider research suggests that this is not an isolated experience. In 2014 the law firm Slater and Gordon found that over 60% of women had someone behave inappropriately towards them5, and a European wide study found that between 40% and 50% per cent of women have experienced unwanted sexual advances or other forms of sexual harassment since the age of 156.

We live in a world where gender stereotypes persist, and sexism, harassment and violence in the workplace are not taken seriously.  When women are dismissed as neurotic or its implied that they deserve the abuse they receive, this creates a culture which prevents women from coming forward and reporting instances of harassment or abuse.

Sexual harassment, and other forms of violence in the workplace are inextricably linked to sexist attitudes and women’s inequality more broadly. To prevent violence, we must also challenge the misogynistic attitudes which allow it to continue, alongside making concrete steps to promote women’s economic equality with men.

Our report marks out a clear space for this kind of primary prevention approach7 to tackling gender inequality in the workplace. Governments and the public sector should strengthen but also look beyond ‘respond and protect’ approaches. This means challenging the attitudes that uphold violence and ensuring that policies and strategies aimed at enhancing women’s position in the workplace also consider how they can explicitly prevent violence.

This work will also require leadership from employers. The launch of Scotland’s strategy to prevent violence against women and girls8, Equally Safe, gives public sector employers an excellent opportunity to make violence prevention a priority. Those who do can be confident that their actions will be well received by their employees - 77% of our respondents said that ‘employers should do more’ to promote gender equality at work, with many commenting that they wanted to engage with employers on equalities issues.

Employers have a variety of options available to create healthy cultures which value diversity and positive relationships between all genders. Enacting a clear code of conduct is a vital first step to counteract sexual harassment, promote gender equality and challenge unconscious bias. Employers can also audit their workplace to assess whether there are hidden gender inequities, including barriers to women’s leadership.

Workplaces need gender equality plans which are well understood and enacted at every level. This work is long term and requires leadership; there are no quick fixes, but, concerted action is vital if we are to ensure that women are equally safe at work.

Sexism is a waste In 2016 Zero Tolerance undertook research to gain further insight from a Scottish perspective on what violence against women in the workplace looks like.