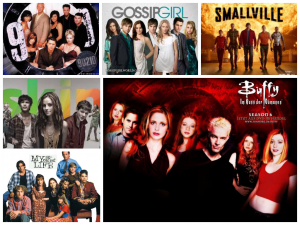 In recent years, the sexualisation of popular culture, and specifically the impact of this on young people, has been a great source of anxiety, prompting lots of popular media commentary as well as academic research and policy intervention (APA 2007; ASA 2008; Papadopoulos 2010; Gill 2012).

Personally, I don’t believe that teenagers and young people engage with media uncritically – I don’t buy into the notion that young people are passive sponges who absorb all they see and then copy it – but at the same time, representations matter. They’re not necessarily reflective of reality, but they are generative and productive and play a key role in how we make sense of the world and our place within it. Certainly, I didn’t first learn about sex and relationships from the (woefully inadequate) sex education class at school, but from watching teen shows like My So-Called Life, Beverly Hills 90210, and reading the problem pages of my older sister’s Just 17.

When I began my PhD at the University of Glasgow in 2007, I set out to explore not the effects of sexual representations on TV on teens, but the kinds of stories about teenage sexuality and sexual violence that are told (or not told) in teen drama series, programmes that are explicitly aimed at teen viewers. The types of programmes I was interested in all prominently featured teenage characters and issues. I looked at 14 different series across a twenty-year period, from early US teen dramas such as Beverly Hills 90210, to supernatural series like Smallville and Buffy the Vampire Slayer. I also looked at British teen series such as Skins and Sugar Rush and more recent programmes, including popular US import, Gossip Girl. These are all shows that are relatively mainstream. Many are broadcast on youth-oriented channels such as The CW in the states and E4 here in the UK. They are also all shows in which issues of gender and sexuality are prominent as teenage characters come of age. Sexual storylines, in particular, are important for marking this transition between childhood and adulthood, with programmes frequently emphasising first dates, first kisses, loss of virginity storylines and the beginnings of monogamous relationships.

As a long-time fan of many of these shows, when I began my research, I knew that they often featured storylines about gendered inequalities. I was also aware of a couple of storylines that featured physical sexual violence, usually a forced kiss. I started my research, quite simply, by counting how many sexual violence storylines occurred in these shows, thinking about where they appeared (i.e. are these storylines resolved within one episode, or do they stretch across several episodes? Do they appear at season finales or halfway through seasons?) and how they were framed. This required coming up with a clear-cut definition of sexual violence from the outset. I decided to define sexual violence quite broadly, partly because there are already books on representations of rape on television and partly because I assumed that rape storylines would be fairly rare in programming aimed at teens. My definition, then, included not just explicitly physical sexual violence, such as rape, attempted rape and sexual assaults, but also nonphysical and verbal forms, such as stalking, obscene phone-calls and verbal sexual and homophobic abuse – basically, any form of abuse that caused visible fear in the victim. One of my aims was to make connections between these different forms of abuse.

The project involved watching over a thousand episodes of programmes (accompanied by repeatedly having to convince my friends and family that, yes, this was a real job!) in order to map where sexual violence storylines occurred. I was hugely surprised by the amount. Across 14 series, I found 74 sexual violence narratives in total – 43 storylines spanned just one episode and the remaining 31 narratives stretched across multiple episodes. The most common form of sexual violence depicted was attempted rape, and it was almost always teen girls who were the victims and males who were the perpetrators. Originally, I had set out to examine male victims of sexual violence as well, but this turned out to be very rare, with the exception of storylines involving homophobic abuse.

Throughout my PhD, I was often faced by people who thought my work wasn’t ‘real’ or important research, due primarily to the fact that teen series tend to be seen as ‘trash’ TV, not something to be taken seriously. But, although dismissed by some, I maintain that teen series hold much potential for complex representations of sexual violence. The very fact that there are so many of these storylines in the first place suggests that these shows are concerned with feminist issues. Plus, because teen series tend to feature multiple teen characters at their core, they are able to incorporate many different perspectives on sexual violence.  In turn, through these different views, programmes often self-consciously draw on rape myths, such as victim-blaming, only to then pick them apart and challenge them. Moreover, because victims are typically central female characters, they have the potential to create strong levels of identification and sympathy in the audience and the emotional aftermath of sexual violence is often emphasised, particularly in over-arching storylines that span several episodes.

I’m wary of being too optimistic, however. At the same time, my research revealed that the same kinds of stories appear again and again, stories that close down possible connections between dominant constructions of gender and violence. Sexual violence is overwhelmingly framed as a personal problem for the teenager (almost always a girl), rather than a more widespread social or political issue. As such, the need for social transformation is rarely acknowledged. Perpetrators of sexual violence in these shows are almost always non-recurring male characters who disappear shortly after the violence has taken place. They are largely portrayed as akin to horror movie monsters who jump out at their victims in the dark and are near relentless in their pursuit, playing into myths of the stereotypical rapist. A clear separation is also made between these men and the series’ ‘normal’ male characters, who frequently protect and defend female victims against these ‘baddies’. Sexual violence, then, becomes a way for these teenage males to display heroic masculinity. These boys are also often better feminists than the girls who are attacked, teaching them about the correct responses to their abuse. Ultimately, it is often male responses that are emphasised. Rarely does sexual violence work to create a shared identity between women.

In addition, sexual violence is hardly ever the main issue of these storylines. Rather, it is used to highlight other things. As an example, one of the most common sexual violence storylines features a teenage girl trying to grow up too fast by lying to her parents, sneaking out late, going to a college party and/or getting drunk, and then getting sexually assaulted by an older man. The amount of emphasis these stories place on what the victim was doing/wearing/drinking at the time of the attack plays heavily into ideas of victim-blaming. At the end of the storylines, the lesson learnt is by the girl, who learns about the dangers of trying to act older than her years, rather than by the abuser. These diversions, as well as the happy endings that are typical of these storylines, mean that the seriousness of sexual violence is often downplayed.

There are, of course, exceptions to these broad trends and my research looked not just at patterns but at differences too between the shows. Although rare, I found that some shows foreground the relationship between sexual violence and wider gender inequalities. Series with central female heroines – Buffy the Vampire Slayer, Veronica Mars, Hex – were often more likely to facilitate feminist understandings of violence against women. In these shows, central feminist issues, including those surrounding sexual violence, are frequently emphasised, often from the very first episode. This makes it difficult to see sexual violence as divorced from dominant constructions of gendered sexuality. Supernatural series, such as Buffy and Smallville, also tend to highlight parallels between (literally) monstrous perpetrators of sexual violence and human males and to position central (usually male) characters in the role of the perpetrator. This makes it difficult to view sexual violence as a one-off problem that is related to an individual ‘baddie’.

But these are the exceptions, not the norm. For the most part, the same stories recur again and again, stories that shut down broader conversations about the links between sexual violence and dominant constructions of gender and sexuality. I certainly don’t want to suggest that young people shouldn’t watch and enjoy these programmes. As I mentioned before, these shows do hold potential for portraying sexual violence in complex ways and, through their ensemble cast, they often privilege multiple different understandings of this abuse. Nor do I want to suggest that teenagers and younger children who watch these shows take everything they see at face value. Much more research needs to be undertaken into how young (and adult) people actually engage with these shows, but the small amount of audience research that does exist reveals that teenagers are often highly critical viewers (see Brooker, 2001 for an example).

However, I would argue that the patterns I’ve uncovered are so repetitive that they start to seem natural and ‘common sense’ after a while, often to the point where they go unnoticed. Indeed, throughout my research I regularly encountered fellow fans of teen dramas who could hardly believe that there was so much sexual violence in these shows that they watched all the time. Only by uncovering and drawing attention to these repetitive and enduring patterns – patterns that persist across the twenty year period of my research – can we begin to ask wider questions about the relationship between gender, sexuality and power.