Skip to menu Skip to content
Home|News/Views|Views|Views|Blog: What about a boys' night in?

Blog: What about a boys' night in?

*Blog refers to experience of spiking* 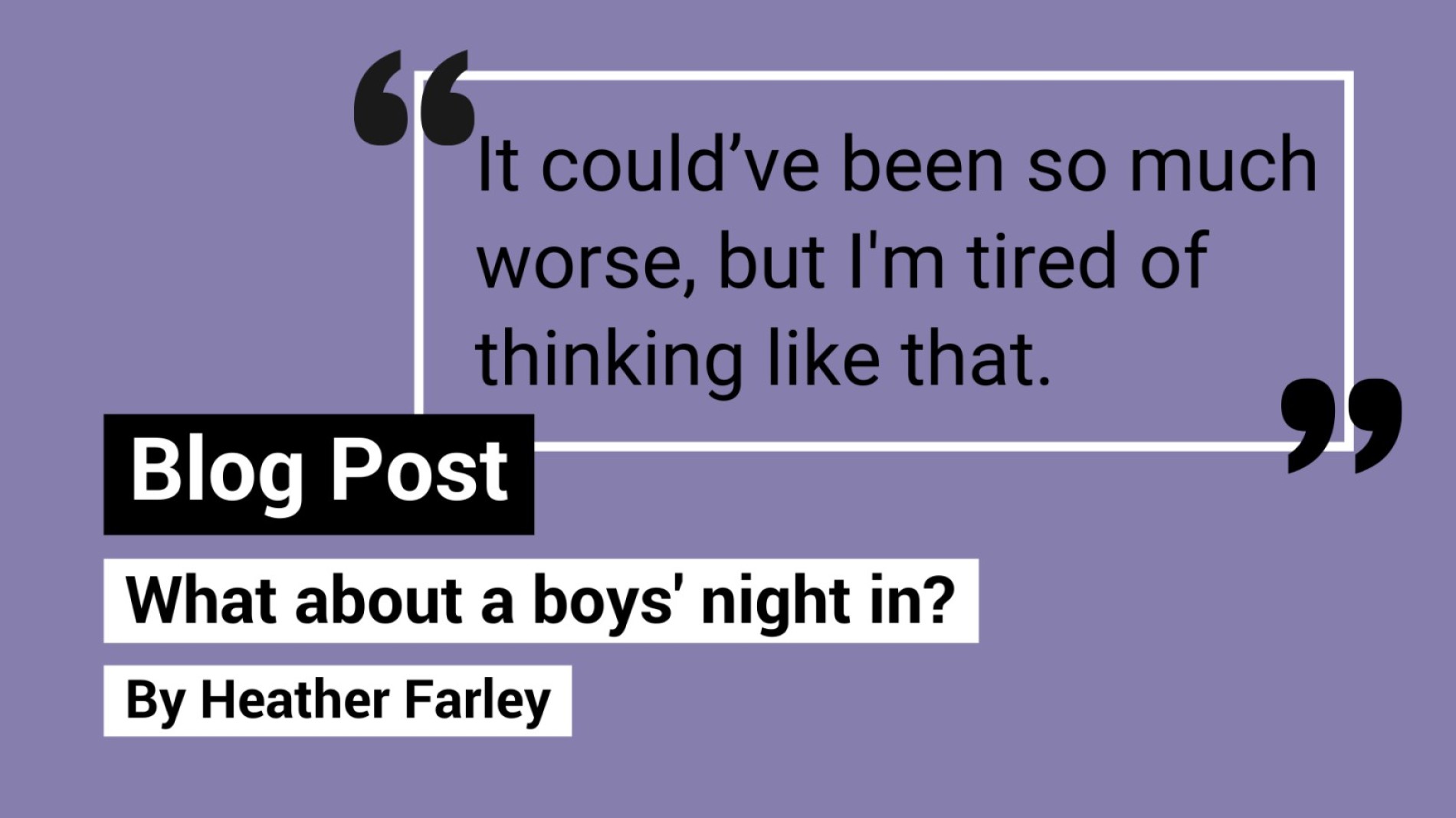 “I actually ended up collapsing in the shower and I couldn't stand up for a while. It was a bizarre feeling, I remember thinking, ‘why can't I move?’”

This was how Tilda, a first-year student in Edinburgh, described her experience of being spiked in her second week of university.

We’ve all heard the precautions women and non-binary people have to take to feel safe. As a consent educator, I witnessed firsthand the alarming contrast in the approaches taken by men and women at universities on a night out.

I asked men, ‘how do you protect yourself on a night out?’ and their answers were humorous comments like, “I’d get some ibuprofen and my Irn-Bru ready for the hangover the next day.’ Yes, sometimes they would mention letting their friends know where they were or when they were coming home, yet far more often they referenced ‘TC’ to help with their impending hangover…the ‘Tactical Chunder’.

The powerful moment would come after this light-hearted back and forth, when we asked the women in the room the same question. Hand after hand would raise and women listed the countless measures they take just to exist safely:

“Never leave my drink unattended”, “Well, we always go to the bathroom in twos, obviously”, “I turn on location on my phone so my friend can watch me get home safe”, “I carry a rape alarm on my keys”, “Walk the long way home because its better lit”, “I carry my keys in my hand”, “Phone my flatmate so I’m talking to someone the whole route home”, the list continues…

This past Freshers week, mainstream media covered the alarming scale of spiking in clubs, bars and at house parties in Scotland, and across the UK. A number of cases were reported in Edinburgh, Glasgow, Aberdeen and Dundee. Most troubling perhaps were the cases of spiking by injection, of which at least 12 were reported.

Police Scotland issued a statement stressing that this was ‘a small number of cases’, with the Assistant Chief Constable Heaton stating that during the months of October and November each year there is typically a small but notable increase in spiking incidents. Nevertheless, they take every report "extremely seriously".

So why does this happen each year? And why is it finally getting media attention?

The sad truth is that spiking happens year round, but in these months there are young people who are often gaining their first taste of freedom, having moved away from home to attend college or university. A group more easily targetable and likely to be spiked because they are out drinking? This is the troubling framing of the Forth Valley Constabulary of Police Scotland at least, who later unreservedly apologised for this blatant and ignorant victim blaming attitude.

Tilda, my interviewee, told me someone spiked her at a halls of residence flat party with a group exclusively of first-year students. She had one, maybe two drinks all evening, again reaffirming it doesn't matter how much you drink. If someone is going out intentionally to spike someone, they will. It's never the victim’s fault.

She stated in hindsight she thinks it was a guy who was, “less trying to take advantage, but more as a ‘funny’ sick and cruel joke”. This shocking revelation made me question;

Why are young men doing this? And why do they think it's okay?

When Tilda told a friend, a young man, that she was spiked, his response was shock. He said, “well, if you can get spiked anyone can!”

First, whilst this teeters on the edge of victim blaming, because of course, nobody ever deserves to be spiked and anyone can be, what this interaction brings home is the pervasiveness of spiking. Second, the disconnect of young men from the reality of their women peers, and the actions they take every day to keep safe.

Women across the country stayed home to boycott nightlife in a protest against spiking and are advocating for their right to safety on a night out. It begs the age old question, where are the men?

How different would it have looked if men had taken a stand? What if the media itself hadn’t focused on how women can keep themselves safe, but asked; ‘why are our young men at universities spiking women?’ ‘What makes men think that it’s some “thrilling sick joke” to spike a drink at a freshers’ flat party?”’ ’

Inclusivity is a cornerstone of any campaign aiming to address gender based violence, but for many the recent campaigns and media attention they received raised the question of inclusivity. We know that trans and non-binary people are those at the highest risk of violence in our society, but campaigns and resulting media coverage often unintentionally exclude this most marginalised group. We must recognise that the root cause of this VAWG is gender inequality and we cannot disentangle this form of oppression and discrimination from others.

Women and their sisters (not just their cis-ters) spend so much time, energy and emotional intelligence to protect themselves from potential threats of violence. Tilda stated about her experience that, “It could’ve been so much worse, but I'm tired of thinking like that.'' This is a familiar truth: women are tired. Non-binary people are tired. The trans community is tired. So let's reposition the lens, refocus the image and ask men, why don't you have ‘a boys’ night in’ to protest the actions of these perpetrators?

Heather Farley is a former Project Support Intern at Zero Tolerance. They are a recent Masters graduate in 'Gender, Peace, and Security Studies' from the London School of Economics and Political Science. They now run the anti-harassment campaign at SOAS University London.