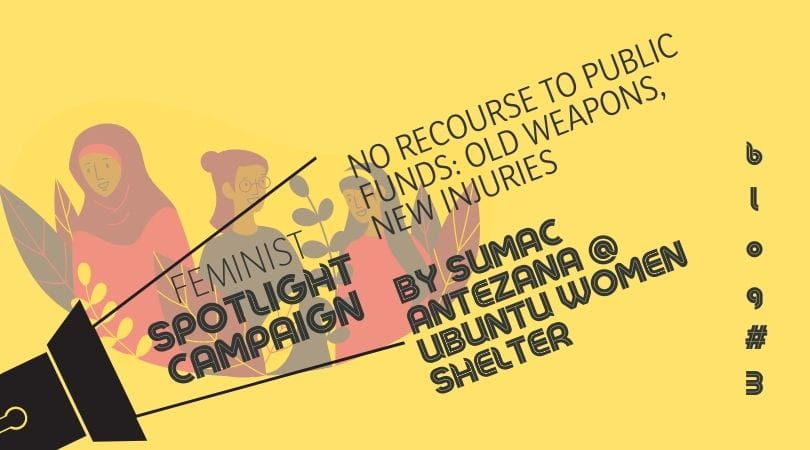 Ubuntu Women Shelter was born from state-sanctioned destitution cutting into the migrant communities of which we are a part. When we realized the No Recourse to Public Funds (NRPF) condition isolated womxn from all the usual avenues for support, we created a charity specializing in trauma-informed, race-critical support and solidarity. Donating to us enables provision of grants, food, and transport to women with NRPF who would otherwise sleep rough.

Sumac Antezana works with Ubuntu Women Shelter to provide wrap-around, specialist support and solidarity to womxn with no recourse to public funds facing destitution. They facilitate workshops on racism in public health, and the gendered effects of the hostile environment.

The No Recourse to Public Funds (NRPF) condition on migrant entry to the UK is an extension of colonial violence in how it functions to keep racialized womxn poor. NRPF is a formal exclusion arising from the myth that migrants come to the UK to claim benefits.

This myth rests on xenophobic colonial nostalgia mourning the decline of the British Empire and blaming previously colonised peoples for ‘souring’ the relationship between Britain and colonised territories. The fact is the Empire hoarded wealth since its inception in the sixteenth century, by commodifying Black and Indian lives and bodies to produce hugely profitable sugar, cotton, tobacco, coffee, and tea. Private companies and the crown profited from the creation of these markets; genocide, ethnocide and chattel slavery were treated as by-products of the process.

Fast-forwarding to after WWII, the European Union and decolonisation of the African continent came about in part as a reaction to the genocidal project of fascism in and beyond Europe. However, the UK’s participation in the EU and decolonisation was conservative; more than four hundred years of imperialism didn’t end even with the supposed recognition of universal rights. Human rights were only legally incorporated in 1998, 160 years after the 1838 Slavery Abolition Act. Public funds are also a twentieth-century invention, rolled out in 1906 to address poverty in Britain, beginning with pensions and school meals. Once these state functions were normalised and their benefits measured (decrease in child mortality, increase in lifespan), they became a hallmark of the modern, ‘developed’ state.

Along with the modernization of states came the formalization of the citizenry. From here the ‘migrant’ emerged as a category opposed to the ‘citizen’ in ways that recreate colonial dynamics. The NRPF condition is a tool of this rhetorical opposition. The citizen, according to the British government, is a worthy recipient of the wealth of the state; the migrant is not. The legitimation of this opposition creates situations where human rights like the right to safety from violence and the rights of the child are violated as part and parcel of social service provision. 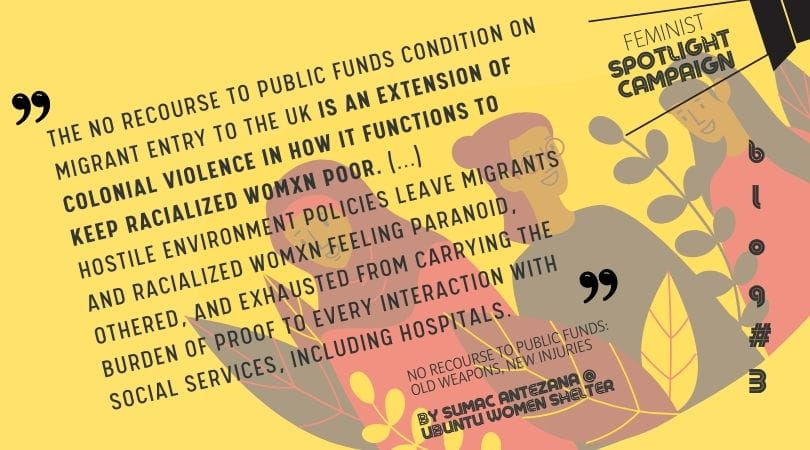 It is important to see these violations as a continuation of the dehumanisation of racialized people, and black people in particular, entrenched in the last five centuries of British history. Anti-racist movements today seek to challenge this collective and individual experience of disproportionate vulnerability to violence and premature death. The disproportionate death-toll of COVID-19 on BAME Britons is only one symptom of institutionalised racism.

We may not think about racial segregation as a British phenomenon, but legal scholar Nadine El-Enany points out in (B)ordering Britain that during the decolonisation process of the late twentieth century, ‘patriality’ was legitimated to maintain exclusionary definitions of a British citizen and constitute Britain as a modern, white nation-state. Despite the amaranthine multiculturalism of our cities, and the tangible contributions of subjects of the British Empire (see: the Windrush generation), racialized people in Britain are burdened with proving their legitimacy as ‘hostile environment’ policies turn service providers and landlords into border guards.

NRPF excludes people from mainstream welfare: benefits, social housing, police support and advice, domestic violence support and refuge, and protection from unscrupulous landlords or employers. This exclusion is most deadly to racialized migrants, especially abuse survivors who are likely to suffer the lowest levels of service engagement and higher rates of self-harm. Hostile environment policies leave migrants and racialized womxn feeling paranoid, othered, and exhausted from carrying the burden of proof to every interaction with social services, including hospitals. NRPF makes it harder to seek help, and functions as a destitution policy for migrants without large savings or salaries. Even among those with the right to work, many have no option other than low-wage employment and struggle with institutionalised exclusion from promotions or training, and often face insecure housing situations. This is an issue experienced by Britain’s entire working class, but NRPF and racialization compound the difficulties for migrant women, especially trans women and mothers.

To help us challenge this monster of a problem we all need to change how we rent and work, to improve circumstances for everyone.

How can you help?

Our blog posts do not necessarily reflect the views of all participating organisations/projects, and all language used is the author's own. Bloggers have received some editorial support from the group, and may have received a fee from the Women's Resource Centre’s social action project budget.