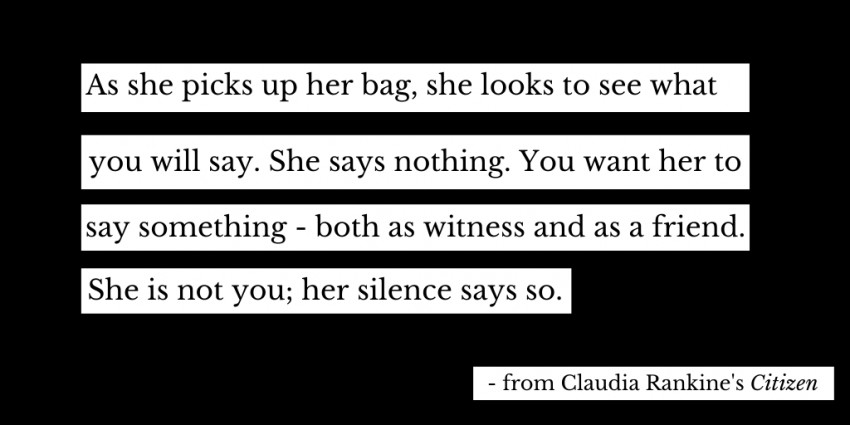 COVID-19 has brought the gaping inequalities that already exist within our society to their forefront, and this, as we know, is only getting worse. However, this week we saw the return to mainstream media of the #BlackLivesMatter movement. Except, the thing is, Black Lives never stopped mattering, and Black people never stopped being killed by those who are appointed to protect them. This resurgence of open conversation about race - catalysed by the murder of George Floyd, an unarmed black man by white police offers in Minneapolis - is imperative; we mustn’t let it disappear. Albeit geographically distant to us here in Scotland, this event has unified people across the globe in the condemnation of systemic racism. White people have a responsibility to keep this conversation going, to confront the uncomfortable nature that is prevalent racism and complicity, and to learn from and listen to the very real fears of Black communities.

White privilege means that no matter how hard your life is, your skin colour doesn’t make it harder. . It isn’t about resenting the skin you were born in, it’s about educating yourself, and using your privilege to redistribute the power that your privilege contains. As a primary prevention charity who pride ourselves on being inclusive and intersectional, we cannot stay silent. However, we also cannot pretend to be authorities on this subject. Therefore, we have decided to compile a blog of recommendations, things to read and watch to help us all understand what is happening, and to understand our own internalised racism; that which we might not be ready to face.

Citizen is a collection of lyric poetry by American poet Claudia Rankine about what it is like to exist as a Black person in America, and the liminality of identity that comes with this. It touches on very contemporary events, from police shootings to the treatment of Serena Williams, from a perspective that is relatable for non-white people, whilst simultaneously being eye-opening for white people.

I Am Not Your Negro

This documentary was compiled from James Baldwin’s unfinished manuscript of ‘Remember This House’. The film follows the murders, through Baldwin’s words, of his friends Malcolm X, Medgar Evars, and Martin Luther King. Baldwin explains what it was like to be a Black American in 1979 in a way that resonates painfully closely with the events we continue to see today. This film is essential for understanding the power relations that cause what Baldwin describes as the white man’s need for the Negro.

Jordan Peele’s academy award winning horror film dramatizes the racial alienation of the black body in white American communities, in a way that is both entertaining and all kinds of terrifying. Peele manages to make an incredible film, whilst simultaneously drawing light on a system of oppression not too distant from the brainwashing in his drama.

She’s Gotta Have it

Based on the 1968 film, this Netflix series created by Spike Lee is engagingly witty, whilst addressing hard hitting issues. The show came out in 2017 and follows the romantic life of protagonist Nola Darling, against the backdrop of the gentrification of her Brooklyn neighbourhood.

Reni Eddo-Lodge, Why I’m No Longer Talking to White People About Race

Eddo-Lodge’s account of the emotional labour required to educate white people, those who acknowledge systemic racism and those ignorant of their privilege. She explores the whitewashing of feminism and the inextricable link between race and class in the U.K., offering a refreshing new framework of how to identify, acknowledge and tackle racism.

The BlackKKlansman depicts an African American police officer from Colorado Springs who, in the 1970s, successfully infiltrates the local KKK branch. Directed by Spike Lee, the dry humour of this film cleverly contrasts with the ugliness of this almost unbelievable true story.

Evaristo’s Booker award winning novel follows the lives of 12 very different women, and through her intelligent and unique storytelling ability, creates a novel with the thread of race relations weaved throughout. This is both a fictional page-turner, and an education; a highly recommended read for an intersectional feminist learning experience.

Filmmaker Ava DuVernay explores the history of racial inequality in the United States, focusing on the fact that the nation's prisons are disproportionately filled with African-Americans.

If Beale Street Could Talk

How Does it Feel to be a Problem? Moustafa Bayomi

The New Jim Crow: Mass Incarceration in the Age of Colourblindness, Michelle Alexander

5 Black bookshops/publishers that you should know about click HERE

Hopscotch - Based on a poem by Nadine Aisha Jassat for full poem go to www.nadineaishaj.com/hopscotch

Edinburgh’s part in the slave trade

In Glasgow, so many streets are named after plantation owners who, in turn, owned hundreds of slaves. Glassford Street, Buchanan Street and many other iconic locations in Glasgow have a hidden slave trade history.

Sign the petitions, for example, this petition to get justice for key worker Belly Mujinga who was spat on at work, before dying of Coronavirus click HERE

Join Anti-Racist movement in Scotland – Stand Up To Racism Scotland

Support your local minority ethnic organisations in their activities, volunteer, donate and take part in their events.

Write to your MPs and your MSPs and ask them to support anti-racist work in their area.

Provide support whenever and wherever you can; we are all responsible for the part we play in our own privilege.

To engage more with Scottish BAME feminist organisation check out the links below:

BEMIS, The national umbrella body supporting the development of the Ethnic Minorities Voluntary Sector in Scotland.