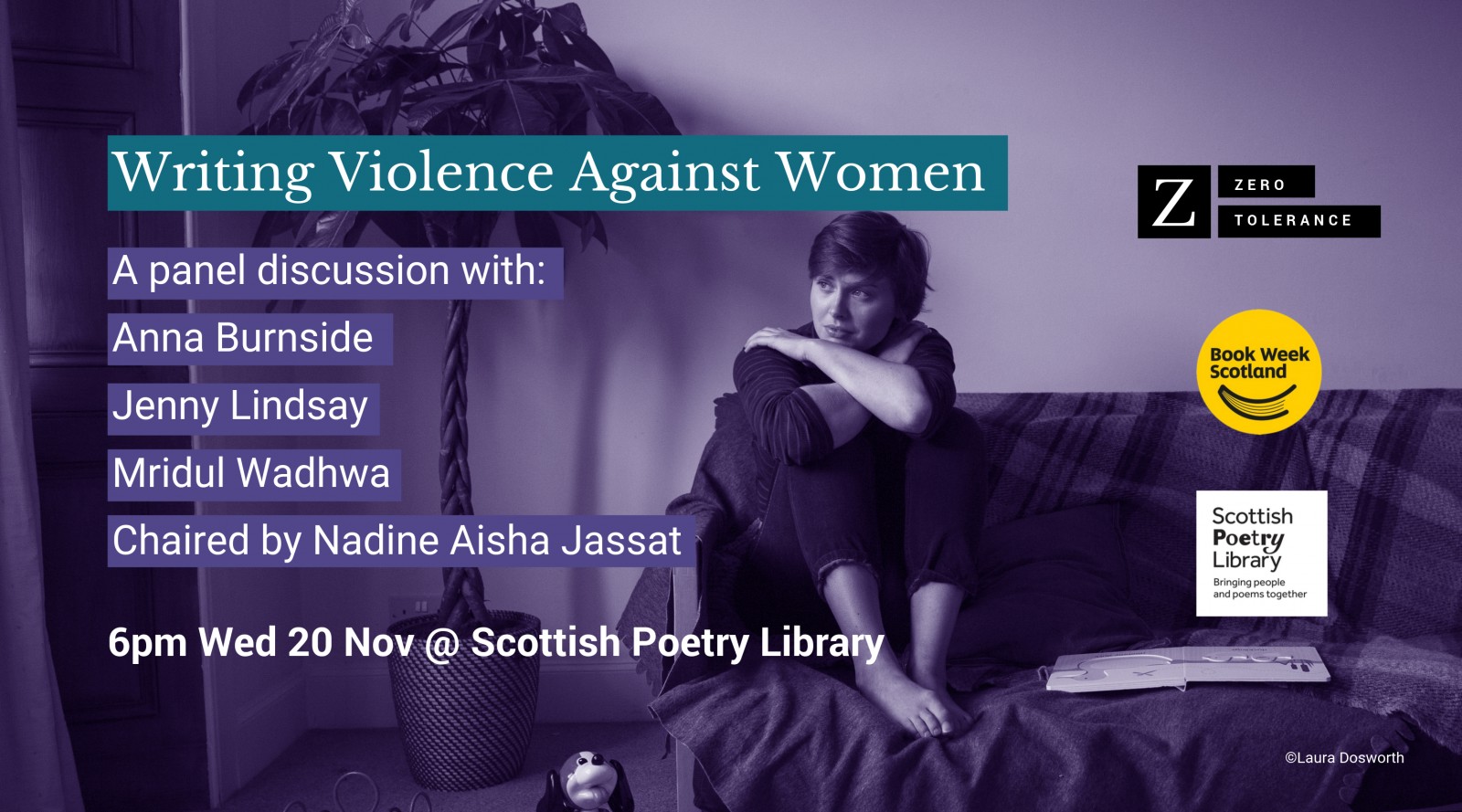 How can journalism improve its reporting of violence against women (VAW)? Do depictions of VAW in storytelling and poetry contribute to the problem, or can creative writing be a useful tool of healing for survivors?

The Scottish Poetry Library and Zero Tolerance have joined together to create Writing Violence Against Woman; a panel discussion between three experts who have worked on and around the writing of VAW.

The panel, including journalist Anna Burnside, Manager of Forth Valley Rape Crisis Centre, Mridul Wadhwa, and poet Jenny Lindsay, will be examining questions around the challenges of writing about VAW, the common issues with its language, and how we can improve the written depiction of VAW in journalism, poetry and prose. The event will be chaired by award winning poet and sexual violence educator, Nadine Aisha Jassat.

In addition, we will display our exhibition, Violence Unseen, with pictures by award-winning photographer Alicia Bruce. Bruce has worked with groups and individuals who have been affected by men’s violence to create a series of photographs which explore unseen and unacknowledged violence against women.

Audience members are welcomed to view and informally discuss the exhibition at a drinks reception, with soft options available, after the panel discussion.

Anna Burnside‘s career in newspapers started in 1980 at the West End News in Glasgow. From there she whizzed through the Edinburgh Advertiser, Dunfermline Herald & Post, Scotland on Sunday, Sunday Herald and Sunday Times. She is currently a feature writer at the Daily Record. She is a regular contributor to TV and radio shows including Good Morning Scotland, Women’s Hour and Scotland Tonight. She has been one of the three panellists on the media review slot on John Beattie’s Radio Scotland show since 2017.

Nadine Aisha Jassat is a poet, writer, creative practitioner known for combining the creative arts with social justice. In 2017 she was named as one of ‘30 Inspiring Women Under 30‘ by YWCA Scotland, and in 2018 she was awarded a New Writers Award from the Scottish Book Trust, and shortlisted for the UK’s largest poetry prize, the Edwin Morgan Poetry Award. Her debut poetry collection Let Me Tell You This was published by 404 Ink in March 2019. As a creative practitioner, she has worked extensively to address issues to do with gender and race inequality.

Jenny Lindsay is one of Scotland’s best known spoken word performers, and her spoken word, theatre and music organisation, Flint and Pitch (est. 2016), was included in The List Magazine’s Hot 100 for 2017. Her 2018 solo show, ‘This Script and Other Drafts’, was described as “one of this year’s most necessary spoken word performances” by The Wee Review. Her second full collection of poetry, This Script, was published in Spring 2019 with Stewed Rhubarb.

Mridul Wadhwa has worked in the violence against women sector in Scotland since 2005. Mridul has campaigned for equal rights for women with no recourse to public funds. As a worker in the Rape Crisis movement, she has worked with colleagues to ensure that the movement is inclusive of all survivors. Mridul arrived in Scotland in 2004 and as a migrant trans woman, she believes that the experience of being a migrant in the UK has been far more disempowering than her experience of being trans in India.