Guest Blog: Time to Scrap ‘No Recourse to Public Funds’ for Women 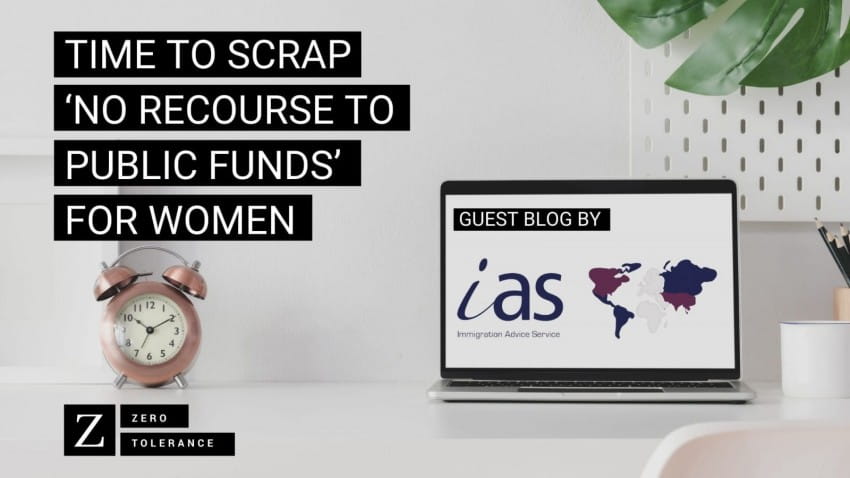 On 6 May 2020, the Children’s Society published “A Lifeline for All Report”, which called for a suspension of the controversial No Recourse to Public Funds (NRPF) condition during the COVID-19 outbreak. The NRPF policy bars migrants with Limited Leave To Remain (LLTR) from accessing the welfare safety net. According to the report, suspending the policy is an “important way to provide some much-needed safety and security to children and parents in very desperate circumstances, including many of those who are key workers”. It also pointed out that many parents in this situation are on zero-hours contracts and some have lost their jobs as a result of the pandemic but cannot access benefits such as Universal Credit or Child Benefit.

On the same day, an eight-year old British-born boy took the Home Office to the High Court over the NRPF policy, which plunged his single mother, a carer, into debt and which eventually, drove both of them to street homelessness.

He won two days later when the High Court judges concluded that the relevant immigration rules, and current instructions to Home Office case workers, do not adequately take into consideration the Home Secretary’s duties under Article 3 of the Convention on Human Rights, which protects people from torture and inhuman and degrading treatment or punishment.

In addition, the NRPF policy was catapulted into greater public awareness and Parliamentary debates when it emerged that thousands of law-abiding migrant families are struggling amid COVID-19. Shockingly, the Prime Minister appears to have only just learned of the policy, despite the fact that it was ramped up in 2012 as part of the Conservative Government’s hostile environment policy. Now, hit with a double whammy of COVID-19 income losses yet no financial safety net or support system to see them through the pandemic thanks to the NRPF policy, as many as 100,000 people in the UK are vulnerable to destitution.

Although Boris Johnson has pledged to review the policy during the Coronavirus crisis, NRPF has long exacerbated economic inequalities in the UK and gender inequality. The rule applies to most people in the UK who are not considered habitually resident and these include those who are in full-time employment, spouses and partners of British citizens, UK-born children and undocumented migrants. Despite this, the NRPF policy markedly and disproportionately affects women and their children.

For example, migrants who hold a Spouse Visa who experience domestic abuse are sometimes forced to stay with their abusers for years - at least, until they get Indefinite Leave To Remain (ILR) - as many are turned away from refuges on the grounds that they have no funds to vacate the space. A separation or divorce that curtails the Spouse Visa will normally see migrant women deported unless they can prove that they have endured domestic abuse. The NRPF policy attached to a Spouse Visa also makes leaving an abusive relationship more difficult, especially when children are involved, as the single parent does not have the legal right to access public funding such as free healthcare, benefits or social housing.

In fact, mothers with NRPF are more likely to experience a worse financial impact in the event of a relationship breakdown. According to a Unity Project report, “Access Denied: The Cost of the No Recourse to Public Funds Policy (on Women)”,women make up the majority of unemployed people with NRPF because they are more likely to be single parents. And women with NRPF cannot access affordable childcare, child benefits and the childcare element of working tax credits. They are therefore often trapped in underemployment, low-paid work or unemployment and are more likely to fall into destitution.

Pregnancy is an additional complication migrant women with NRPF faces. Even for women in full-time work, Statutory Maternity Payments often aren’t sufficient enough to safeguard a newly pregnant women through the entire maternity period. As a result, the Unity Project finds migrant women are unable to take sufficient maternity leave altogether, jeopardising the welfare of both mother and child. Yet for undocumented pregnant women, barricaded from employment, renting or any financial help whatsoever, maternity is an eye-watering costly affair. The NHS can charge upwards of £7,000 for antenatal and postnatal care, which surges if there were any complications in the birth. NHS trusts and hospices have long lobbied against this unfair fee, arguing that undocumented pregnant women are refusing to attend vital scans and appointments out of fear of racking up debts. To add to this culture of fear, undocumented pregnant women further fear the NHS would report them to the Home Office and see them deported. The outcome is that these vulnerable women, often relying on local charities, friends and food vouchers to survive, become extremely vulnerable to exploitation.

The recent landmark case involving the eight-year-old boy and his single mother has resulted in new guidance and has the potential to revolutionise thousands of families’ lives. Parents can now apply to have NRPF lifted in the event of ‘imminent destitution’. However, the change doesn’t go far enough. Already, migrants can seek support from local councils in the event of destitution, but Section 17 system is flawed and burdensome and too often than not leaves applicants at the mercy of a ‘postcode lottery’ where they are left without provisions.

By contrast [to England], Scotland appears to have addressed the NRPF issue head-on by accommodating vulnerable and destitute people during the COVID-19 crisis. However, although over £875,000 has been provided by the Scottish Government to safeguard people, including migrants who are barred from welfare support, Scottish ministers are now calling on the Home Office to “do the right thing” and suspend NRPF restrictions entirely for migrants throughout the duration of the pandemic. So far, the financial burden has fallen on Scottish authorities with little support from the UK Government.

However, merely suspending the condition throughout COVID-19 barely addresses the gender divide NRPF exacerbates even when there isn't a deadly virus around. Scottish Women’s Aid and Amnesty International have long urged the Scottish Government to support migrant women with NRPF who are victims of domestic abuse, arguing that both the UK and Scottish Governments “are failing in their international human rights obligations, in their duty of care and in their moral duty to support those fleeing violence and abuse.” The situation in Scotland for migrant women fleeing abuse is similar to that of England; migrant women are often denied access to refuges and become ensnared in abusive households with no escape route on offer.

To date, the easiest way to be free of the NRPF policy is through gaining ILR. Yet the path to residency rights and relief from the NRPF policy can last from five to ten years and is fraught with costly obstacles (visa and visa-associated costs alone can go higher than £15,000 before British citizenship is achieved), leaving migrant families with little provisions all the while being prohibited from carers allowance, child benefit, housing benefit and welfare support.

Whilst local councils are rightly calling for the suspension of NRPF policy in light of the current pandemic, the country is better served if the policy is lifted permanently, allowing women to access welfare support in the same way Britons can ask for help.

Jade MacRury is a content writer and correspondent for the Immigration Advice Service.

The guest blog posts and linked content do not necessarily reflect the views of Zero Tolerance, and all language used is the author's own.