Write to End Violence Against Women Awards - Letter to The Sun 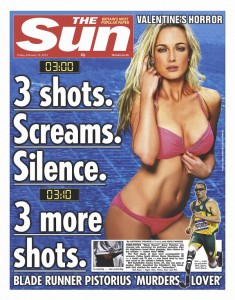 Dear Mr Dinsmore, I am writing to you as a member of the judging panel of the Write to End Violence Against Women Awards, a new awards scheme recognising and rewarding high quality journalism that makes a positive contribution to changing attitudes to violence against women. I am however writing to present you with the dubious honour of receiving our wooden spoon award in the category of ‘Worst Article’, for your 15th February 2013 front cover image and accompanying headline: ‘3 shots, screams, 3 more shots, silence. ‘Blade Runner Pistorious ‘murders lover’ on valentine’s’. This cover was nominated by a member of the public, and then voted ‘worst article’ by a panel of judges which included journalists, writers, a representative of the NUJ, and heads of women’s organisations in Scotland.  Your award ‘win’ was announced at an awards ceremony at the Scottish Parliament on the 12th of November 2013. The front cover was chosen as the ‘worst article’ for a variety of reasons:

Partner murders may seem shocking, but are also mundane in their regularity. In the UK two women every week are killed by their male partner (or former partner). Though tragic, these occurrences are regular and part of a continuum of men’s violence against women. This front cover gives no context about how common partner murders are; in fact it does the opposite, making it somehow a dramatic and exciting anomaly.  Your use of ‘Valentines Horror’ makes it seem like entertainment rather than a tragic, but all too common event. In general this front cover leaves a bad taste in the mouth, it shows little interest in violence against women as a phenomenon beyond this case, which the image suggests was only tragic because she was sexy. We also find it intriguing that there was no ‘page 3 girl’ in that edition - was that because all the titillation needed for that day was found on the front cover? At Zero Tolerance we are keen to support the press and help improve standards of reporting on violence against women. Because of this we are including several copies of our ‘Handle With Care Guide’, a guide to responsible media reporting of violence against women, offering advice on various issues from interviewing survivors to providing relevant context and ensuring that violence is neither trivialised nor sensationalised. We are also happy to offer you a meeting to discuss any ways you can improve your editing choices in future. The media have a vital role to play in preventing violence against women. The platform you have should be used to speak out against injustice, and challenge dominant narratives that allow violence against women to continue. Journalists, editors and other media professionals have the choice to report truthfully and aid public understanding of violence against women, or to fall back on stereotypes and sensationalism. We hope that this guide will help you to make better editorial choices in the future, and that our wooden spoon will serve as a reminder of the need to report news responsibly. Additionally our development officer Liz Ely (Liz.Ely@zerotolerance.org.uk) would be happy to meet with you to discuss this issue, and work with you on improving practice. Regards Jenny Kemp Coordinator Zero Tolerance http://writetoendvaw.com/
19
b
« Later entryEarlier entry »