Skip to menu Skip to content
Home|News/Views|Views|Views|To be feminist is to be antiracist: VAWG prevention work must implement this

To be feminist is to be antiracist: VAWG prevention work must implement this 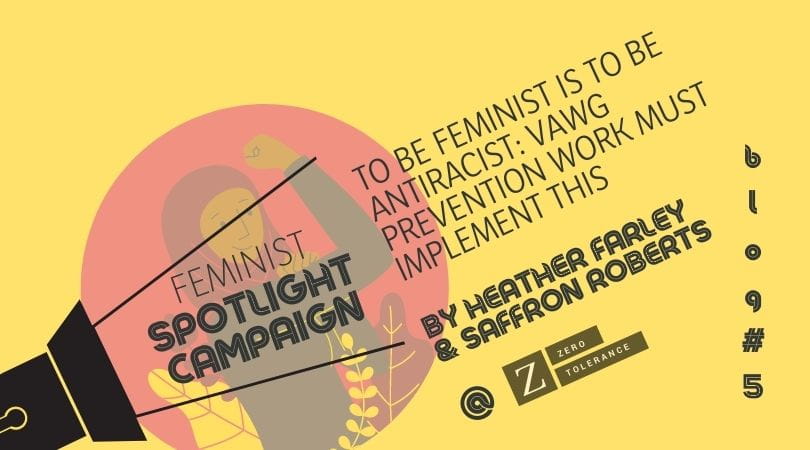 
Albeit an analogy about the USA, the principle of Ibram X. Kendi’s statement rings true across the globe, and Scotland is no exception. Scotland often projects the image of a progressive society striving for equality . After all, Scotland has started to make amends for having 12 years of Section 28 banning the ‘promotion of homosexuality’ or the ‘acceptability of homosexuality as a pretended family relationship’ in any educational institution up until 2000. We will now be the first country in the world to have compulsory LGBT+ education in schools, including LGBT+ history, so seemingly we’re well on this progressive path.

However, does this progressivism, which fails to actively take a feminist and anti-racist stance, really address deeply embedded structural inequalities that often manifest in violence?

We need only to look through our newspapers’ headlines, or at last month’s anti-antiracist protests in George Square Glasgow, where statues of slave traders were being ‘defended’ by large numbers of right-wing protesters, to see the ugly underbelly of racism in Scotland. But, surely, the death of Sheku Bayoh, a black man who died after being restrained by police in Kirkcaldy and whose death is still to be investigated 5 years later – a terms of reference for the enquiry into his death was set in May this year - is enough to silence us all into acknowledgment of this deep seated racism that our country owns.

As much as our society is racist, it is sexist too. Just looking at the Scottish political system, once you scratch the surface of our feminist leadership, you uncover the sexism that continues to overshadow Nicola Sturgeon in the form of her colleagues being publicly accused of, and trialled for, sexual misconduct.

So why are these issues so interlinked?

Oppression is one of the root causes of violence and we can’t end one form of violence without ending all forms. Racism is a part of this array of oppression, each form interacting with the other, influencing the other, compounding the other. Antiracism work is a vital component of primary prevention work, so is the fight against homophobia, xenophobia and transphobia.

So, in a country with a racism problem, a sexism problem, and the illusion of exceptionalism and liberal progression, how do we tackle prejudice?

Radical change is the answer. Education is one place to start - teach children antiracism as you wish to teach children gender equality. It is not enough to wait for a teachable incident; there is no excellence gained by a curriculum that does not address inequalities. Even when that is addressed, we all know that children learn from the world around them, which we ourselves create. So, individually and together as a society, we need to be part of this change by questioning existing narratives and creating new cultures.

Scotland’s current curriculum glorifies British colonial history; I remember when I was at school, only a few years ago, we learnt the phrase, ‘the sun never goes down on Victoria’s crown’ about the so-called ‘glory days’ of the British Empire. The education system must avoid colonial sentimentality and actively address the systemic oppression of people of colour and women throughout global history.

In Britain, this superiority and ignorance runs deep, being the architects of one of the most pervasive and violent colonial powers in recent history, which Scotland took active part in.
To tackle the foundations of Scottish wealth, progress and success we need to reflect on its racist and sexist foundations - both literally and figuratively built during the slave trade. Sexual violence was a part of slavery, it was a part of colonisation. And if we want to end violence against women we have to grapple with the history of racism, colonialism and slavery in the UK.

Channel 4 recently introduced a documentary entitled ‘The School That Tried to End Racism’ which engages children with these discussions, encouraging them to face the harsh realities of their privilege and their oppression, depending on the intersectional implications of their ethnicities.

This documentary exemplifies the ways antiracist education can be implemented from a young age. At the moment, the only place children can talk openly about race is in the home, which can trap children into cyclic mindsets. To openly, sensitively and honestly talk about race in a public setting as 11-year-old children should not be a revolutionary idea. While it is not banned, as Section 28 banned discussing homosexuality, it is not encouraged either. Children have no forum, framework or collective safe space where they can talk about issues of race and gender. To enable change it is essential that children do talk to each other to further understanding and to grow into antiracist, antisexist adults.

Feminists regularly talk about this pre-emptive approach in terms of teaching consent and respect. We need to be teaching boys not to be violent, as opposed to teaching girls to protect themselves from violence; this sentiment can and must be transferred to antiracist thinking. Antiracism is as much about prevention of racist mentalities as preventing violence against women and girls is about preventing sexist mentalities. Therefore, conversations must be had that make men uncomfortable and make white people uncomfortable. Afterall, it is uncomfortable to be challenged in the relatively sheltered and secure societal position that many of us have, but when the security of this position exposes others to oppression, this challenge becomes necessary.

We need to change the systems and structures that disproportionately work for white, cis, male, heterosexual, able-bodied people. We need to think about people outside of those categories - they are not being served adequately and they are being denied access to resources. 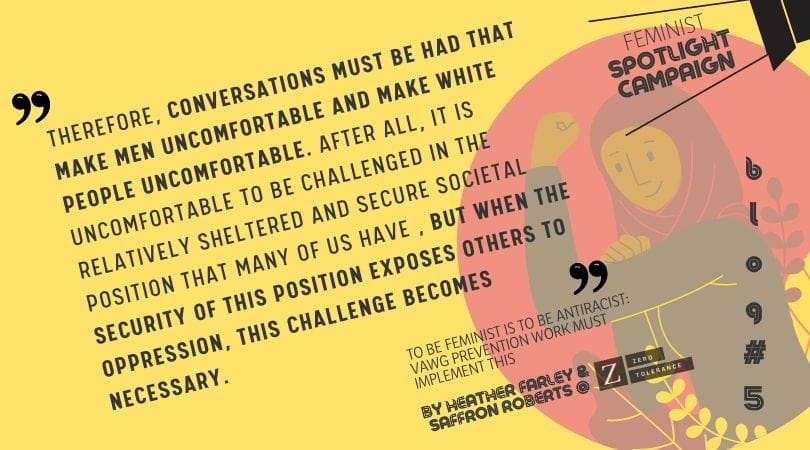 The COVID lockdown has created many huge daily behavioural changes in our world; people have gone from making sourdough and videoing home workouts to engaging in #BlackLivesMatter protests all over the world.

This tumultuous time is causing unprecedented change and we must capitalise on this engagement. Our education system has the opportunity to move with these ever-changing times and hold itself to a new standard of inclusion and historical accuracy. Afterall, Ibram X Kendi is right, “in no other capacity is a problem solved by not talking about it”.

Join our campaigns to end violence against women and girls, learn more about what can you do here:

Donate : Your donations will support our innovative work and will help us campaign for strategic policy changes and challenge the public attitudes that allow violence against women to continue.
https://www.zerotolerance.org.uk/support-donate/


Heather Farley and Saffron Roberts are Project Support Interns at Zero Tolerance. Heather is a recent graduate in International Relations from the University of St Andrews. During that time, she ran a student-led Got Consent initiative which educated students in bystander intervention. Saffron is a recent Edinburgh English Literature graduate and activist. In early 2018, she founded the campaign Period Poverty Edinburgh.