Skip to menu Skip to content
Home|News/Views|Views|Views|Support survivors, not abusers 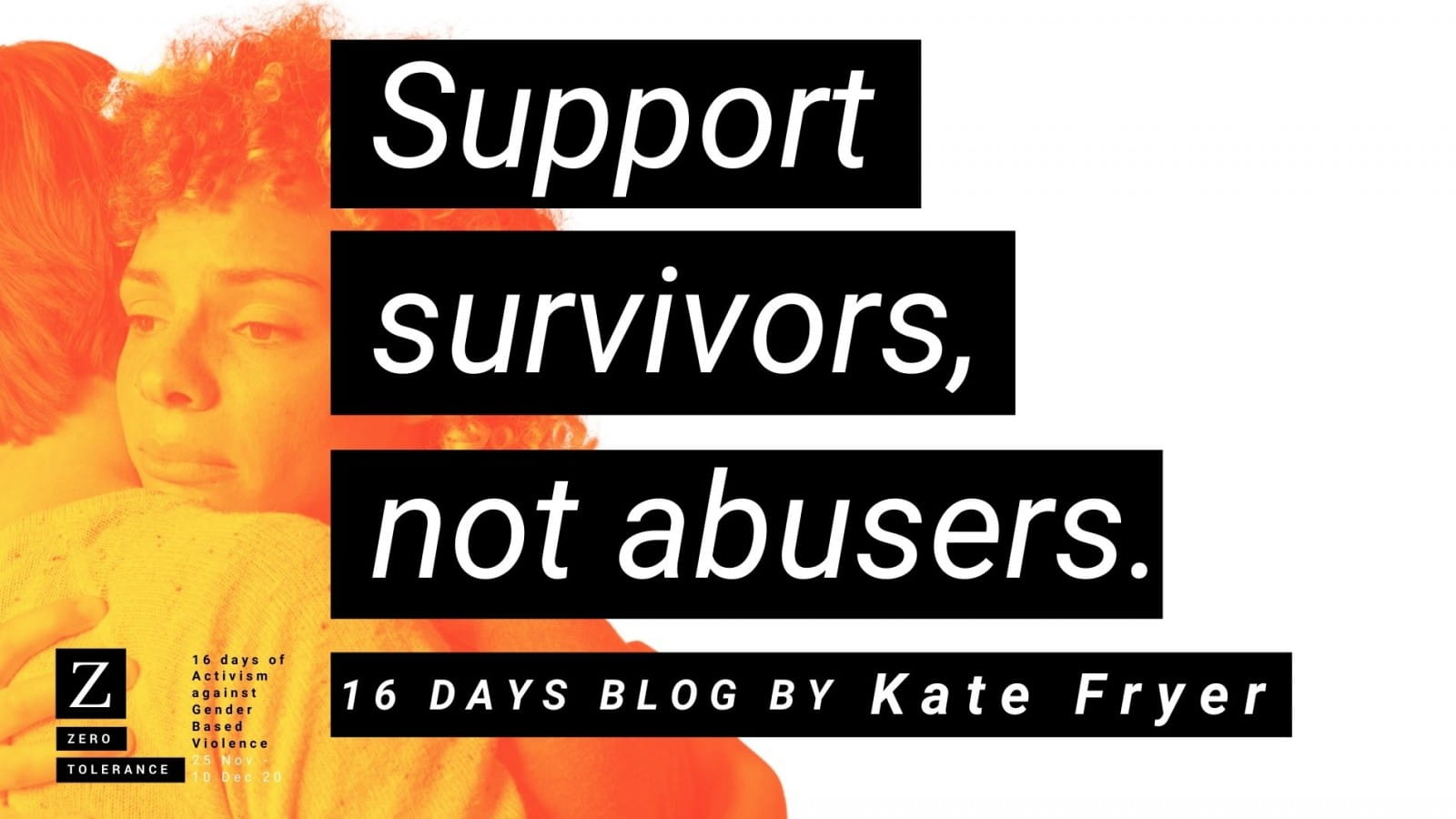 Warning: Some readers may find the content of this blog upsetting. Discussions of rape, sexual violence and victim-blaming.

Being subjected to rape or other forms of sexual violence is one of the most traumatic things someone can experience. The effects of trauma on a survivor can take many forms, but the overarching theme is that they can be incredibly overwhelming to deal with. During an attack, whilst I’m sure we’d all like to think we would stand our ground and fight back, the most common response is to freeze. This does not reflect on the survivor in any way. It doesn’t mean they are weak. It doesn’t mean they wanted it to happen. All it means is that they have had a completely natural response to trauma as their instincts automatically take over.

The issue is that this reality is not widely recognised, considered or understood in society. All too often, we see and hear examples of this harmful ignorance. People discussing cases they’ve skimmed over in the papers with very little thought, yet feel justified to flippantly ask the question “Why didn’t she just stop him?” Often, people may not even realise that the things they say are problematic or triggering. I’ve heard people I previously wouldn’t have imagined to have any tendency to blame survivors passively state, “yeah, but I know I wouldn’t let anyone hurt me.” I realise that in this case, and I’m sure in many others, there was no conscious intention to shift blame to survivors, and that it's probably a method of coping with the harsh reality that anyone is vulnerable to sexual violence. However, that doesn’t change the fact that such statements are damaging, and contribute to a widespread issue surrounding the treatment of survivors of sexual violence: victim-blaming.

Victim-blaming does exactly what it says on the tin – focuses blame on survivors for whatever sexual violence they have experienced. Considering the overwhelming aftermath of trauma, this added aspect of blame is really not what is needed nor, most importantly, deserved. To list just a few of the effects that survivors may encounter to better illustrate the overwhelming experience they are already facing: PTSD, disassociation, issues with sleep, flashbacks, night terrors, negative impact on motivation to work or socialise, decreased ability to cope with stress, and blaming themselves. 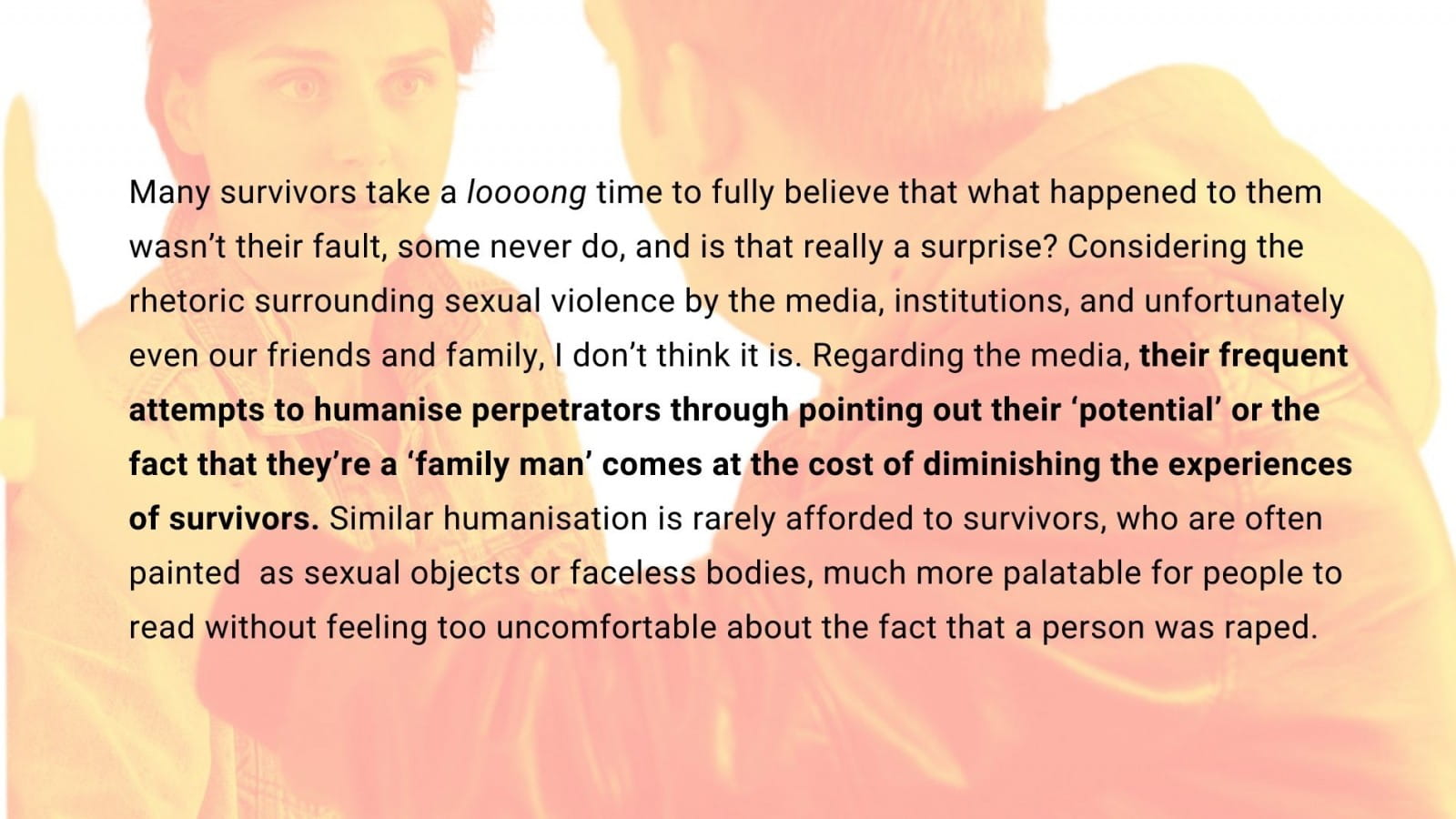 Many survivors take a loooong time to fully believe that what happened to them wasn’t their fault, some never do, and is that really a surprise? Considering the rhetoric surrounding sexual violence by the media, institutions, and unfortunately even our friends and family, I don’t think it is.

Regarding the media, their frequent attempts to humanise perpetrators through pointing out their ‘potential’ or the fact that they’re a ‘family man’ comes at the cost of diminishing the experiences of survivors. Similar humanisation is rarely afforded to survivors, who are often painted as sexual objects or faceless bodies, much more palatable for people to read without feeling too uncomfortable about the fact that a person was raped. Headlines or comments sections frequently mention how much alcohol the survivor had consumed or what they were wearing, as apparently that alters how deserving they are of having their boundaries and body respected. Now, I know some people will probably be rolling their eyes at me for referencing these “clichés” that people like me always seem to be pedalling – eugh – but consider how fed-up survivors are of seeing them. Of consistently having to face statements and questions that frame them as responsible, whilst at the same time they may be trying tirelessly to stop believing this themselves so they can heal.

Honestly, it makes sense that people don’t want to believe that such horrible cases of abuse are happening, because then the reality becomes clear: sexual violence could happen to anyone and someone you know could be a perpetrator. But this reality is the very reason we must stop dismissing the experiences of survivors, because when we do the more their healing is disrupted, and the more people can get away with committing such assaults.

Victim-blaming is also committed by the very systems, institutions and people you’d believe are there to protect and support. The police make it commonplace to ask survivors how drunk they were or what they were wearing. My own university, after a series of publicised cases of sexual violence on campus, plastered our union with what were quite frankly tokenistic posters stating, “don’t walk home alone” which clearly focuses on the behaviour of those at risk of assault, rather than on the actions of perpetrators.

Lastly, and what I personally find most difficult, is the victim-blaming that survivors can face from friends and family. Disclosing an experience of sexual violence can feel very vulnerable and often indicates a significant level of trust. The response that is generally needed and can mean so much is simply a listening ear and a show of support – in the way they need. Unfortunately, all too often this is not the response a survivor faces. Instead, they are bombarded with questions; “why did you let him come back to yours?” or dismissive statements; “I’m sure they didn’t mean it like that”, “maybe you weren’t clear enough.” Believe me, these thoughts and what-ifs have most likely already raced through their head countless times, they don’t need them reiterated by someone they are seeking support from and who, honestly, has no idea what they’re going through. So, if someone discloses their trauma to you, please don’t victim-blame and please don’t make them regret placing their trust in you.

Kate is a student in the Glasgow area