Scottish social attitudes and addressing VAW at the source 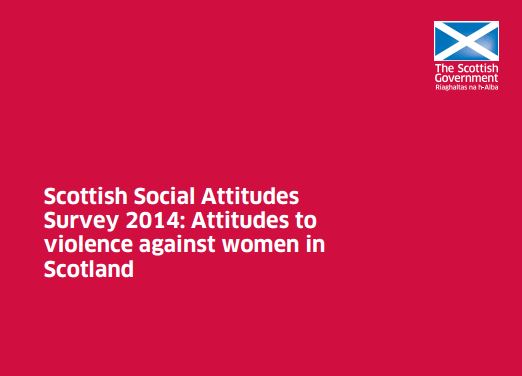 Other findings were profoundly worrying, and expose the underlying attitudes of victim-blaming that still plague Scottish society:

“There was evidence to suggest people believe that in certain situations woman are at least partly to blame if they are raped. Only 58% said that a woman who wore revealing clothing on a night out was ‘not at all to blame’ for being raped, and 60% said the same of a woman who was very drunk. Around a quarter (23%) agreed that ‘women often lie about being raped’ and nearly 2 in 5 (37%) agreed that ‘rape results from men being unable to control their need for sex’.” (Page 6)

It bears repeating: women are never to blame for violence that is committed against them.

Rape is always the fault of the rapist.

The persistence and prevalence of such disturbing attitudes highlight the need for primary prevention: work that tackles the root causes of VAW. Primary prevention isn’t a quick fix; it is a long term strategy to prevent violence from ever happening by challenging the attitudes, values and structures that sustain inequality and violence.

The fact that so many people have different views on different forms of VAW also highlights a lack of understanding of the cause of VAW – gender inequality. Domestic abuse, rape and sexual assault, sexual harassment and sexual exploitation are not separate issues – they are all expressions of the same problem, which is women’s lack of power compared to men.

Without addressing gender inequality – and the attitudes that allow it to flourish – we cannot meaningfully address violence against women.

For example, the social attitudes report also showed that people who prefer children to conform to gender stereotypes are less likely to take VAW seriously. That’s why we produced our Just Like a Child Guide: to challenge these attitudes and support children’s workers and parents to bring up children as individuals, without harmful stereotyping.

Media reporting can also influence attitudes and some reporting still promotes myths such as that women can be blamed for violence that happens to them. On the other hand, good reporting can play a vital role in increasing understanding of violence against women and challenging its place in our society. Our Handle With Care Guide gives reporters advice on how to report VAW sensitively and responsibly. And the Write to End Violence Against Women Awards recognises writers who address gender inequality and VAW in their work.

On Tuesday, Scottish Parliament MSPs unanimously backed a motion which welcomed the International Day for the Elimination of Violence against Women. We are deeply gratified that much of the surrounding debate addressed the need to tackle the gender inequality that supports VAW, as well as the need to change mindsets – and particularly the mindsets of those men who feel entitled to control and abuse women. Because of a culture that reinforces inequality at every turn – from our nurseries to our news agents – men are being taught to see women as “lesser.”

At the debate, Stewart Stevenson MSP made the important point that:

“The change that will make the greatest difference will not be a legislative change, necessary though that is in certain areas; it will come when we find ways to change men’s minds.”

We couldn’t agree more. If we’re going to defeat the problem of violence against women in Scotland, we need to address it at the source.