Skip to menu Skip to content
Home|News/Views|Views|Views|Planning for Equality: Commercial frontages and the exclusion of women from Edinburgh’s public realm

Planning for Equality: Commercial frontages and the exclusion of women from Edinburgh’s public realm

Last week, the No More Page 3 Campaign to get rid of images of topless women from The Sun newspaper reached 135,000 petition signatures. These are exciting times for feminism and hopefully big changes are afoot in the way that women are portrayed in the world around us. I live in Edinburgh, Scotland’s ‘Inspiring capital’, or that’s how Marketing Edinburgh describes it. For women in the city though, exactly what Edinburgh inspires in them might not be quite what the tag line implies. As a woman, a feminist and as a planner I take exception to Edinburgh’s sexual entertainment industry. Edinburgh is home to the majority of Scotland’s strip clubs and lap dancing clubs and research demonstrates just how bad this industry is for women. The majority of the strip clubs lie within the city centre and the frontages provide quite a visual impact on Lothian Road and West Port areas in particular. 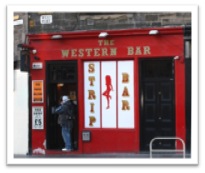 Edinburgh City Council’s policies on such establishments are alarmingly aloof, particularly when compared to sister city Glasgow. Glasgow commissioned research on the industry in 2002 and the concluding report states “Images of women and ‘entertainment’ which demean and degrade women portraying them as sexual objects plays a part in ‘normalising’ sexual violence and contributes to male abuse of women being acceptable, tolerated, condoned and excused.” (GCC, 2002, p.1). Glasgow does still have lap dancing clubs; the council as yet has no right to refuse their operation in the city, and although my research on the street frontages of the establishments outside Edinburgh was desk based I was unable to find signage or window/building displays as graphic as the ones in Edinburgh.  The closest I found belonged to ‘Forbidden’ in Maxwell Street, Glasgow’s city centre: 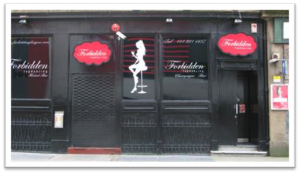 In this silhouette the woman is at least seen to be socialising at a bar as opposed to posing provocatively as with the two Edinburgh clubs. So who is responsible for such displays on commercial premises? In the Edinburgh City Local Plan, Policy Design section 12: Shopfronts it states: “Shopfront design, shop signs and shopfront advertising play an important role in the visual environment of the city. Shops and businesses need to announce themselves and their offer to customers, but this should be done in ways which enhance the appearance of buildings and the street scene generally.” (City of Edinburgh Council, 2010, 12:3.30). In light of this I would question why signages such as those above are allowed in the city. There is no specific guidance on what enhances a building or environment and what is detrimental. There is however very specific guidance in reference to commercial frontages as part of listed buildings or in conservation areas. For example, here are two images of Greggs the bakers.  One is a general Greggs branch in an unrestricted area and the other is in the New Town conservation area located on Broughton Street. 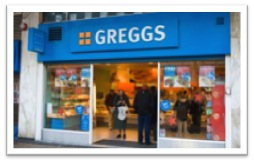 Preserving Edinburgh’s or indeed any location’s historic integrity and culture is of great value to society and this is an important part of planning policy and practice. But can the first image of Greggs really be considered detrimental to the character of an area when the ‘women for sale’ images of Bottoms Up and the Western Bar, by their long standing presence, are deemed acceptable? History matters but women don’t? There is no such planning guidance available on measuring the suitability of such frontages. The 1984 Town and Country Planning Act states that “adverts should be judged on amenity and safety” (Scottish Government, 1984, Part VIII). Arguably, safety is an issue when we consider the links between violence against women and the systematic objectification of women. However, the criteria used to determine planning applications for advertising Scottish Government Planning Enforcement guidance states: “The actual content of an advertisement is not covered by planning control. Any complaints about the content of an advertisement should be made to the Advertising Standards Authority.” (Scottish Government, 2009, p.2). So a planning authority may be limited in their control of demeaning images displayed by such venues. But it gets worse: according to the Child’s Eye’s campaign which campaigns to protect children from sexual images in public, Trading Standards don’t have any jurisdiction over matters of taste and decency. The Indecent Displays Act 1981 does not even define what ‘indecent’ means so going down this route to complain about Bottom’s Up’s windows would likely prove just as futile! How can this be? Why won’t anyone take ownership of this issue? What is wrong with our society when we consider blue plastic signage more offensive than women portrayed in such a negative and socially damaging fashion? These frontages impact on the culture and identity of the people who live in or visit the city and as such create a barrier to women participating freely in the public realm, in their own city! The existence of such venues as entertainment is bad enough and is part of the same battle, but their right to advertise their female products and in such a crass and misogynistic manner at street level contradicts an array of planning regulations, guidance and principles. This is a moral, social and indeed a planning issue and one that needs to be addressed now.