Guest blog from Talat Yaqoob, White Ribbon Scotland The issue of men engaging in feminism has, and continues to be, controversial. Whether it’s men attending Reclaim the Night Marches or men being quoted about their thoughts on rape culture, feminists often double take and worry about what that involvement means. 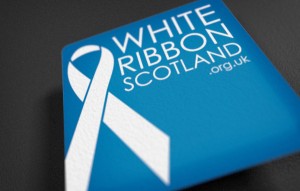 So they should. Women have continued to raise their voices because they were not being heard, because men were talking on their behalf and often saying the wrong things. However, when done the right way, men engaging in women’s rights can be hugely positive. At White Ribbon Scotland, we work with men to tackle violence against women. We do this through campaigning, education and, perhaps most importantly, working alongside women’s organisations. We believe men can, and should be, engaged in the feminist movement, but as allies not decision makers. That, quite simply, is it. The White Ribbon Campaign was first created in 1991 in Canada by a group of men who felt strongly about tackling violence against women, after a shooting of 14 female students at the University of Montreal. Since then the campaign has gone global and White Ribbon Scotland began in 2008. We see women’s rights as human rights and as such believe it is the duty of men, as well as women, to engage in creating a world where women are equal, safe and heard. However, we do this whilst respecting a platform for women only to make their decisions and respecting the need for a safe space for women only to voice their experiences. With two women dying each week in the UK as a consequence of domestic abuse and 1 in 4 women worldwide experiencing domestic abuse at some point in their lives, ending violence against women is everyone’s issue. The vast majority of victims of sexual, psychological and domestic abuse are women and the majority of perpetrators are men. It is not the responsibility of women to stop it from happening to themselves; it is the responsibility of men to not commit, condone or remain silent about violence against women. I remember this campaign from Rape Crisis Scotland “Top 10 tips to Stop Rape”. The tips are for men. I think this says it all. We still live in a patriarchal society with structures in place which allow the continuation of gender based violence. To break these structures, we need to educate those that benefit from it without even realising its existence and change how they think, how they act and how they benefit. Most men don’t go about in their everyday life knowingly disempowering women; by campaigning and educating we can highlight the inequality that men maintain without realising it. Most men do not commit violence against women, but by campaigning and educating, we can ensure that most becomes all. For all of these reasons, and more, White Ribbon Scotland work’s with men and helps them to engage in tackling violence against women in the appropriate and most effective ways. Find out more are www.whiteribbonscotland.org.uk