Have yourself a gender equal Christmas 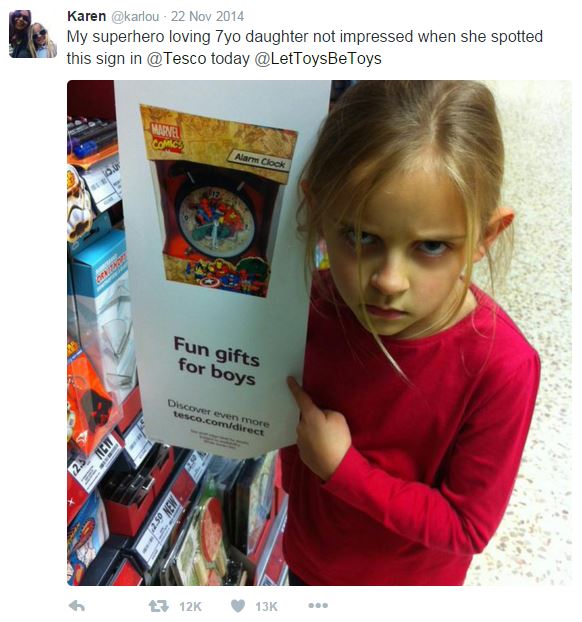 And for many caregivers, the run up to Christmas is a time where it can feel like there is endless, inescapable marketing and advertising for children’s toys, media, and games - all vying to make it onto Santa’s list and many of which will be marketed in a highly gender specific and unhelpful manner.

Zero Tolerance has noticed some notable improvements in 2015 in gender labelling across the aisles. For example, Tesco stores committed to stop segregating toys by gender on particular toys when challenged on social media by Maggie aged 7 (pictured above)  and ‘Toys R Us’ committed finally to dropping gender labelling altogether .

But strong gender stereotypes in the early years continue to have a marked impact on our children’s development and learning around the concept of what it is to be a man or a woman in our society. We know from our experience in supporting those who work with young children at nursery that a variety of factors often reinforce negative stereotypes we hold around gender i.e. boys and men are strong and dominant and girls are supposed to be subservient, weak and invest more in their appearance. With studies continuing to link belief in traditional gender roles with likelihood to condone violence supporting attitudes towards women and victim blaming, we believe it's important to start messaging around gender equality at a young age.

Caregivers told us that they felt the same way when Zero Tolerance launched a survey recently to gather the views of caregivers across Scotland asking whether, and from where, their children received information on what it means to be a boy or a girl in our society.

We were overwhelmed by the response; we received with over 1,400 responses that told us how Scottish caregivers felt about what specific influences their children see, hear and experience. We are currently mining over the results, but early indicators suggest that respondents feel that treating children equally and fairly is very important with 94% saying that it is important to treat boys and girls the same in early childhood. Respondents were clear that this was linked to more than just the marketing of toys, but in the everyday interactions they had with other caregivers and other children.

So what can caregivers do this Christmas to minimise the effects of gender stereotyping?

All that’s left to say is a very merry Christmas from all at the Zero Tolerance team!

The Zero Tolerance Just Like A Child Guide provides resources to support professionals and parents to raise children who are not limited by outdated or restrictive ideas of what is suitable for boys and for girls.