Strictly Come Dancing Judge,  Alesha Dixon backed a Scottish Government funded national campaign to encourage teenagers to open up about domestic abuse. The campaign was launched by Voice Against Violence at their first anniversary event at the beginning of last month. Through working with the Voice Against Violence young people, the campaign focuses around ‘feeling like you’re living in a warzone’.  The idea of a warzone conveying the idea of violence without having to show what type of violence it is and suggests battle and conflict and fear. Posters have sent to guidance teachers in all 376 secondary schools across Scotland and on online advertisement – accessible only by 13-16 years olds - shown on Facebook, MSN, YouTube and popular music and magazine sites has had a massive 1.5 million views so far!!! 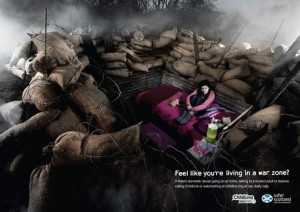 30 second video on YouTube The campaign calls for young people to....