Skip to menu Skip to content
Home|News/Views|Views|Views|BLOG: If you are Queer, are you more at risk?

BLOG: If you are Queer, are you more at risk? 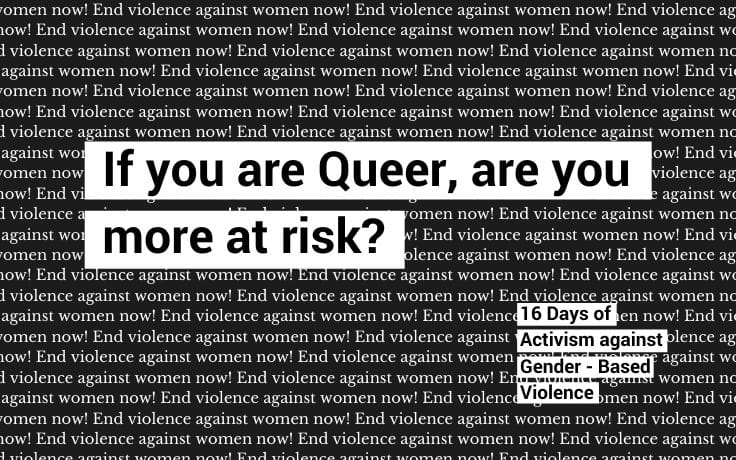 Sexual and gender based violence and its impact on Lesbian, Bisexual, Transgender women, and Non-Binary people.

When writing this blog, I wondered how to show just how important Zero Tolerance’s latest research is. I thought, maybe, writing the names of the women from the most recent cases of Violence Against Women (VAW) that became headlines would hold people’s attention? There have certainly been enough high publicity cases in the media this past year to engage a reader, right?

Yet, these types of cases, the ones seen on the front pages, covered on the evening news, and flooding social media, are not the subject of Zero Tolerance’s latest research project.

So what did we find?

What was interesting was the location of this violence. We know that most VAW happens in domestic spaces, behind the privacy of closed doors and hidden by romantic and familial relationships. Yet, this research found that the main location that lesbian, bisexual, and trans women, as well as non-binary people, experienced violence was in public spaces.

So what is a ‘public’ space? Public spaces range from streets and public transport, to bars and restaurants, to workplaces and social media. 72% of respondents stated that the violence they experienced due to their sexuality or trans status occurred in public spaces.

Startlingly, 72% recorded the perpetrator of the violence they perceived to have faced due to their sexuality or trans identity/history, to be a man. 11% said they were unsure of the gender of their perpetrator.

Transgender women experienced significantly more discriminatory behaviour in the workplace than cisgender women. Transgender people, and transgender women in particular, remain one of the most marginalised groups in our society. Perhaps most alarmingly, multiple respondents self reported experiences of exclusion in workspaces that marketed themselves as feminist.

People in public spaces become more and more at risk of violence the further they get from presenting in traditional heterosexual and gender norms. Lesbian and bisexual women and non-binary people face discrimination both for their gender identity and for their sexual orientation. Intersectionality is a vital concept when understanding these experiences. Kimberle Crenshaw coined the term ‘intersectionality’, which means acknowledging how the multiple layers of ourselves, such as womanhood, sexual orientation, and race, impact our experiences, and that these layers are intertwined and intractable.

This research revealed more than the type and location of violence faced by these women and non-binary people. It also showed us the lack of faith in the justice system.

​​“...it's too minor and too frequent to be worth bothering about.”

This finding is consistent with the distrust felt in the judicial system across the country, due to only 43% of rape and attempted rape trials resulting in a conviction, compared to an 88% overall conviction rate for all other crimes. In 2019-20 there were 2,343 rapes and attempted rapes reported to the police, but only 300 prosecutions and just 130 convictions. A shockingly low number.

We are living in a time of global crisis, a pandemic halting everyday life and a changing climate, risking entire ecosystems, including our own. But as one respondent so emphatically stated,

“We need to see that we've also been living in an epidemic of Sexual and Gender Based Violence.”

This epidemic did not stop for COVID-19. It will not stop while we deal with the impact of climate change. To end this violence, we must stop it as a society, together. The findings of this new research will shock some, but be all too familiar to those who identify as queer women and non-binary people.

Heather Farley is a former Project Support Intern at Zero Tolerance. They are a recent graduate in International Relations from the University of St Andrews. During that time, they ran a student-led Got Consent initiative which educated students in bystander intervention.

As a part of their internship, they conducted the research mentioned in this blog, ‘How does Gender-Based Violence impact LBT women and non-binary people in 2020-2021?’ . This research is currently unpublished, with plans to publish soon.

Our helpline is for LGBT+ people who have or are experiencing domestic abuse. We are also here for people supporting a survivor of domestic abuse; friends, families and those working with a survivor.

Free and confidential service for anyone of any gender who has experienced domestic abuse or forced marriage.

helpline@sdafmh.org.uk (response within 2 days by email)

Full details of access to support for people who are deaf or hard of hearing can be found at https://www.rapecrisisscotland.org.uk/help-deaf-access-to-support/

We can arrange for language interpreters.

Free and confidential support and information for anyone, women and men, affected by sexual violence, no matter when or how it happened.

Free and confidential help for anyone who is worried a child is at risk of, or has had, FGM.