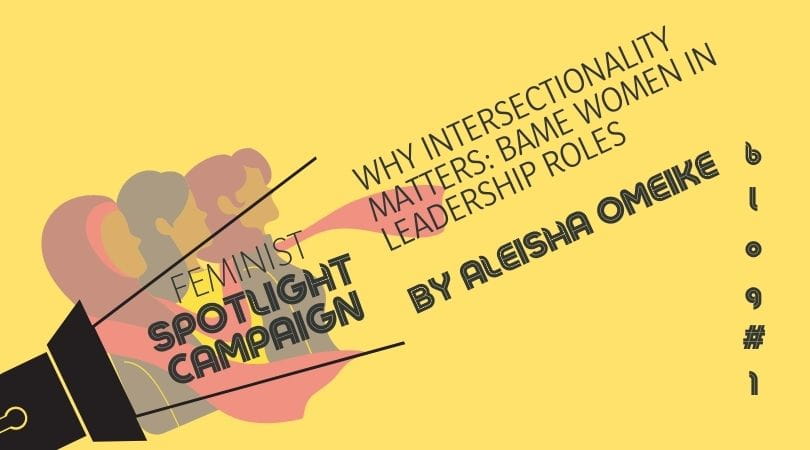 Aleisha Omeike is a 19 year old university student and an intersectional feminist, passionate about empowering everyone. In her free time she enjoys writing and doing research about the things of interest. Aleisha is going into her third year studying psychology, she is committed to achieving her goals regardless of her skin colour or gender.

Racism and Sexism combine to shortchange BAME women as they experience multiple forms of oppression.

The strict categories of “racism” and “sexism” are too broad and do not allow consideration for how these forms of discrimination intersect and frequently interact (coming hand in hand), amplifying inequalities experienced by BAME women. In Scotland, the BAME population in leadership roles is very poor, particularly with respect to women.

This is due to the unique barriers BAME women face and the unconscious bias held by other people which can limit BAME women’s progression in society.

My experiences as a Mixed-Race woman

Growing up as a mixed- race woman in a predominantly white town in Glasgow, I have faced my fair share of racism and racist abuse. I have faced discrimination due to my female identity also. I notice how these forms of oppression come together in many instances. Despite this, I’ve always had big aspirations and been very ambitious. I will always remember when I was younger, around 9 or 10 years of age and my school teacher asked what I’d like to do when I grow up. I said I'd like to become Prime Minister. The teacher laughed in my face. I noticed that when a white boy in my class had also said this, it was not as amusing. I remember feeling a bit discouraged by my teacher's reaction, the unconscious bias held by people in leadership roles and education needs to be addressed so that young BAME women and girls understand it is possible for them to have high aspirations and achieve their ambitions.

Research has shown that there is a lack of opportunities for BAME women to take up leadership positions. Many BAME women employees do not have the contacts, network or prospects that are needed to climb the career ladder. A number of BAME women in Scotland do not have the opportunity to develop leadership skills for several reasons including: family responsibilities, lack of knowledge about available opportunities and language barriers. All of which disadvantage BAME women and provide white men with an advantage. While there has been lots of social progress in recent decades, there is still plenty more that needs to be done to tackle racist and sexist based discrimination within Scottish society and institutions, both of which continue to limit BAME women.

Unconscious bias prevents BAME women’s progression in the workplace. A survey conducted by Scottish charity, Close the Gap, found that over 70% of BAME women reported experiencing racism, discrimination, racial prejudice and/or bias in the workplace. Furthermore, there is a severe lack of role models in high ranked positions (particularly in management and political positions), for BAME women in Scotland. There are no BAME women MSPs, and there never have been in over 20 years of devolution. Having people that look like yourself and understand your own experiences in the field/career position one is interested in can hugely motivate people to pursue a similar career. There would be a multitude of benefits that would come with improving BAME women’s representation in positions of influence in Scotland. Research has shown that increasinging BAME participation in top management positions can add £24billion to the UK’s economy annually. Furthermore, variations in ideas and perspectives, which BAME women would bring to the workplace, would lead to an improved work culture.

Coronavirus has had a significant impact on BAME women, compared with the rest of the population. BAME women are particularly vulnerable to the economic and social impacts of the virus. Research by the Fawcett Society found that over twice as many BAME women in the UK reported losing support from the government during the crisis compared with white women. Furthermore, a quarter of BAME mothers said they were struggling to feed their children and pay for childcare during the pandemic. Lack of childcare means many BAME women are having to work part-time, making it harder for them to gain status in their jobs and be considered for promotion. This unfair disadvantage hinders BAME women immensely and puts their careers on hold. 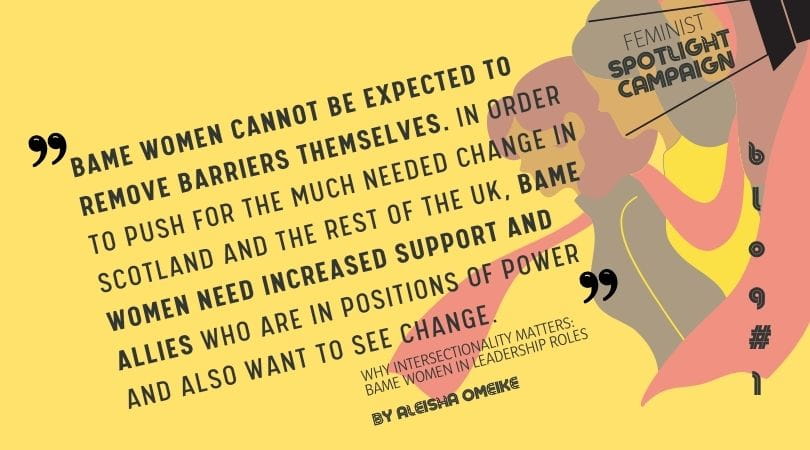 BAME women cannot be expected to remove barriers themselves. In order to push for the much needed change in Scotland and the rest of the UK, BAME women need increased support and allies who are in positions of power and also want to see change.

How can you help?

Our blog posts do not necessarily reflect the views of all participating organisations/projects, and all language used is the author's own. Bloggers have received some editorial support from the group, and may have received a fee from the Women's Resource Centre’s social action project budget.